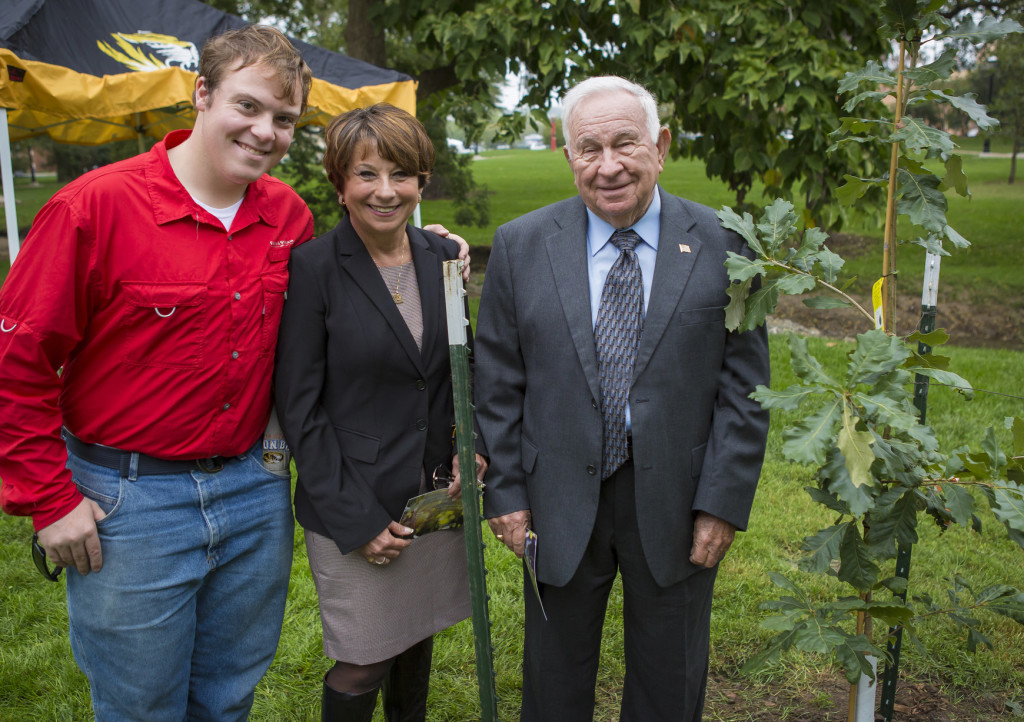 On a crisp autumn morning, Wayne Lovelace again did what he knows best – plant a tree. Lovelace, along with MU Chancellor R. Bowen Loftin and Vice Chancellor and CAFNR Dean Tom Payne, unveiled the 175th tree planted this year on the Mizzou campus to commemorate the 175th anniversary of the founding of MU.

The tree in Peace Park is not the only tree at MU that Lovelace helped bring to flower. The landscaping around the Agriculture Building was his company’s donation to CAFNR. He’s had a shovel in a lot of other Mizzou Botanical Garden projects, too.

Lovelace is a 1958 graduate of the MU College of Agriculture’s horticulture program. In 2005, Lovelace, then vice-president and general manager of Forrest Keeling Nursery, and his wife Judy, purchased the company. Their children, horticultural industry veterans Rob Lovelace and Kim Lovelace-Young, joined the management team of the new organization. Kim, vice president, is a 1981 graduate of CAFNR. 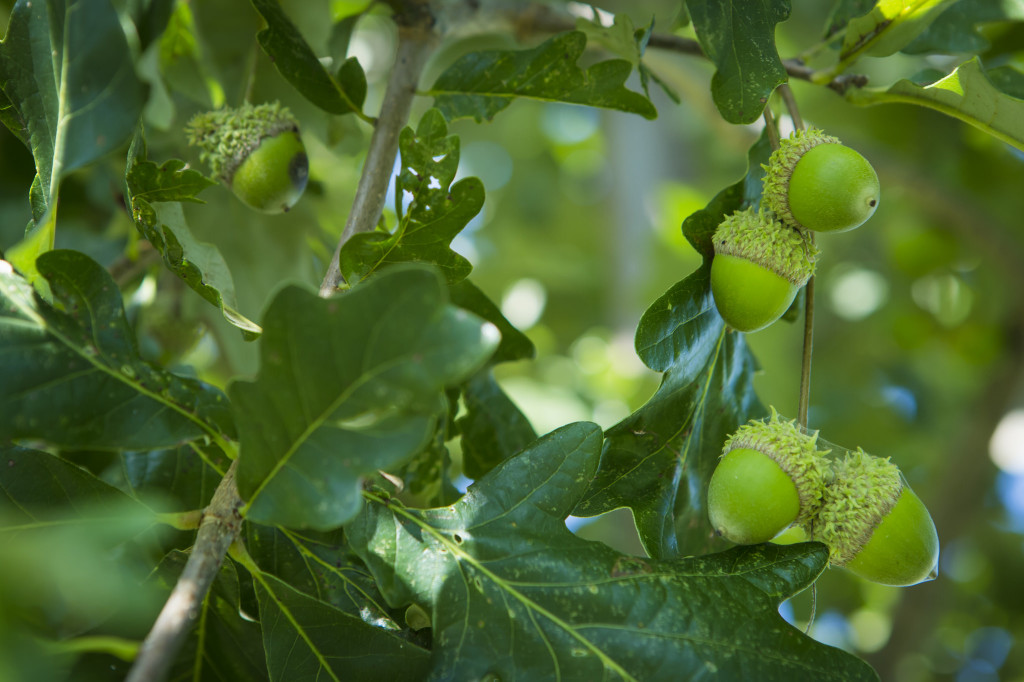 Forrest Keeling was founded in 1949 and was known for its native deciduous tree and shrub seedlings and RPM Root Production Method. RPM features accelerated growth, survivability and early fruit production, based on a cutting-edge process developed by Lovelace.

He subsequently has collaborated with nurseries, conservation and private organizations to best utilize the technology in such areas as wetland restoration, wildlife habitat development, degraded landscapes and the regeneration of native hardwood trees in hostile environments.

Lovelace’s expertise has long been recognized. In 2004 he was inducted into the American Nursery and Landscape Association (ANLA) Hall of Fame. He is also the recipient of the International Plant Propagators Fellow and Award of Merit, the 2005 University of Missouri Faculty-Alumni Award and many other award distinctions from horticultural and university environments. In 2012 he was named Forest Conservationist of the Year.

The 175th commemorative tree at Mizzou, called Bucks Unlimited Oak, represents a joint effort by CAFNR’s Center for Agroforestry and Forrest Keeling. Agroforestry did the research and development, while Forrest Keeling added its technology to quickly grow large numbers of trees.

Buck’s Unlimited Oak is a new tree variety developed by Mark Coggeshall, assistant research professor of forestry at CAFNR. He developed it using natural grafting techniques of swamp white oak at the Horticulture and Agroforestry Research Center (HARC), New Franklin. It is a native, non-invasive tree that is often found in bottomland forests and valleys across the Midwest.

His goal was to develop a tree that had earlier flowering and fruiting, greater survivability, faster growth in a variety of climates and superior production of acorns, a wildlife-preferred food source.

Acorns from the swamp white oak species are the most preferred fall food source for many wildlife species, including white tailed deer and turkey. To his knowledge, no other source of planting stock is also well adapted to the regional growing conditions of the Midwest, and potentially most of the eastern U.S.

Because of this ability, Buck’s Unlimited Oak was trademarked by MU and licensed for production to Forrest Keeling. The company intends to sell the tree to landscapers, conservationists, landowners and others in the tree’s natural growing area of Kansas to Florida to Maine. 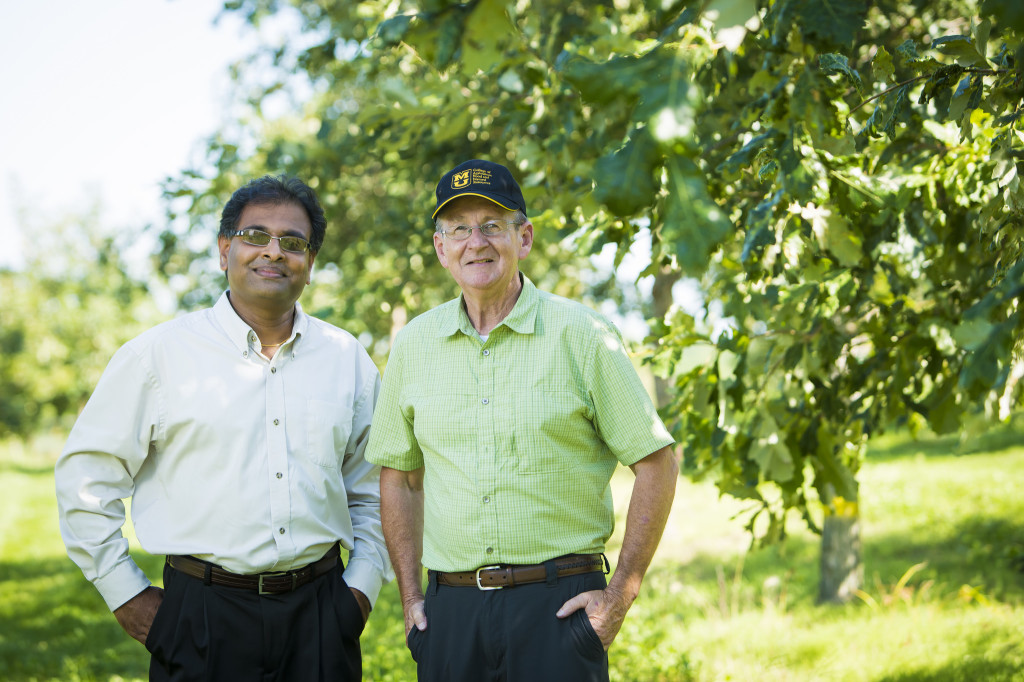 Shibu Jose and Mark Coggleshall of the MU Center for Agroforestry. Photo by Kyle Spradley.

Forrest Keeling grows more than 97 varieties of seedlings, 122 varieties of potted liners, 22 species of oaks and 27 varieties of nut trees. It specializes in native plant material.

The Agroforestry Center worked closely with Lovelace to commercialize the tree. Currently, Forrest Keeling has about 14,000 of the trees ready for sale this fall. Another 14,000 are being grown for sale in the fall of 2015.

Forrest Keeling can produce such large numbers of trees through the RPM process that achieves rapid tree growth and is used in wetland and forest restoration, carbon sequestration and the rapid creation of vegetative environmental buffers. The process uses a unique air-root pruning process and special nutrition to produce their trees.

These trees are part of a much bigger operation. All told, Forrest Keeling sells between 1.2 and 1.5 million trees, shrubs and seedlings each year. Many of them go to environmental and conservation projects, such as rebuilding riparian areas and wildlife habitat. Well over 50 percent of the nursery’s RPM production goes to such restoration work.

Ultimately, it will be landowners who most benefit as the tree will attract wildlife to property for recreational viewing and hunting. Good hunting property is worth thousands of dollars more per acre than other property, said Shibu Jose, director of the MU Center for Agroforestry. Hunting, according to Hunting Works for Missouri, supports 24,000 jobs in Missouri with an overall impact of $1 billion. Missouri tourism will benefit from increased numbers of hunters coming to the state, Jose said.