Angie is one of the 17 percent of Missourians who are food insecure. She not only worries about feeding herself, her daughter and her grandson but also tries to put healthier meals on the table.

There’s hope growing in her backyard, however. Earlier this year she picked up seed packets of carrots, spinach, squash and other vegetables at her local food pantry. The fresh food-to-come will not only help fill her kitchen cabinets, but add better nutrition to her meals.

The seeds were made available through Grow Well Missouri, a project of the Interdisciplinary Center for Food Security (ICFS) housed in the College of Agriculture, Food and Natural Resources at the University of Missouri. The project is designed not only to help food pantries get more food to their clients but also to address a gnawing problem of obesity and other health issues that come with food insecurity.

Bill McKelvey, Grow Well project coordinator, said fruits and vegetables can be hard to come by for food pantry clients. He said many pantries have limited refrigeration, so they stick to canned and processed foods. That often leaves patrons without something healthy or fresh. 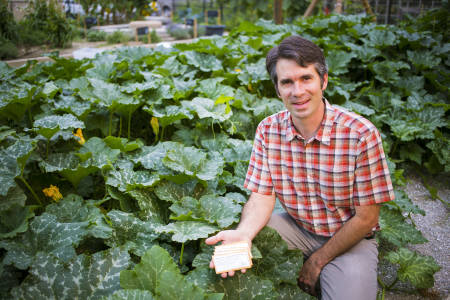 For a variety of reasons including a lack of healthy options, food pantry clients are more likely to be diabetic, have high cholesterol or high blood pressure, or be obese, according to research from the ICFS.

Grow Well is attacking the problems of food quantity and quality from the ground up, providing seeds and gardening advice to people in need. The vegetable varieties selected are ones that grow well in Missouri’s climate and soils without specialized skills or equipment.

McKelvey said that so far this year almost 22,000 seed packets have been distributed. The project has recently added seedlings of tomato, pepper, sweet potato, kale and collard greens.

A survey of people who picked up the seeds indicates that more than 80 percent of them have established a garden. Of these, 87 percent said they would continue with the gardening, helping them to become more self-sufficient.

Almost 90 percent of these gardeners have shared their surplus vegetables with friends, family and neighbors, helping them have nutritious options. Over half of the gardeners froze some food to eat during the off-season months. 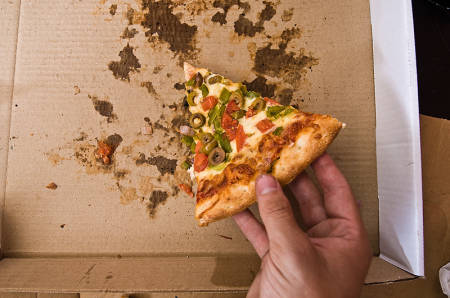 McKelvey said Grow Well has to be one of the most cost efficient assistance programs around. It cost approximately $4 per person to provide clients with 20 different varieties of spring and summer vegetable seeds.

Not Just a Lack of Food, But the Wrong Food

It can be tough for people with limited income to find healthy food.

A study by The Food Trust said retailers offering affordable healthy food choices are rare in low-income or rural areas. The United States Department of Agriculture and The Reinvestment Fund found 25 to 30 million Americans—about a tenth of the population—live in communities that don’t have adequate access to healthy food retailers, such as supermarkets or grocery stores.

The research showed an increased percentage of convenience stores and fast-food outlets in these areas. As low income people often have limited access to transportation, buying close often means diets with too many calories and too few nutrients.

There are other impediments to healthy eating, McKelvey said. Many people have busy schedules, or juggle work, family and other commitments. Others have never developed food preparation skills. 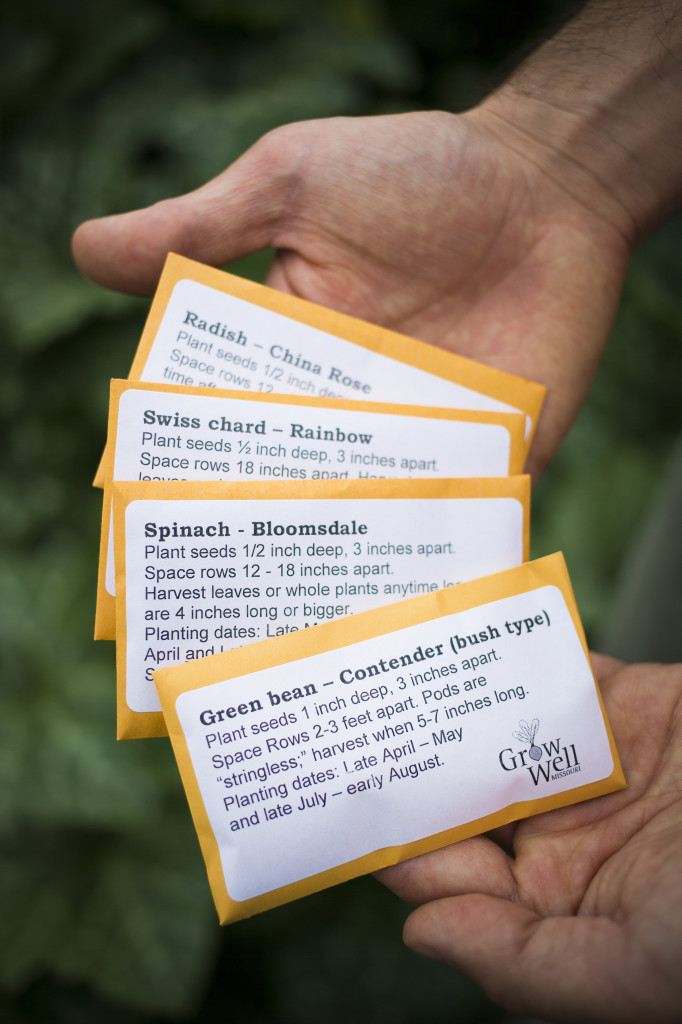 Examples of seeds distributed through the Grow Well Program. Photo by Kyle Spradley

To deal with the latter, soon the project will distribute recipes keyed to the items being grown in the gardens. In association with the food pantries, demonstrations will be made showing how to prepare and store these foods. There will also be new classes, like composting, that will increase the yield of the gardens. The gardeners have also asked for help in pest and disease control.

McKelvey said providing these skills is critical to helping the clients achieve a lasting self-sufficiency. He plans to work with food pantries and other organizations to eventually take over this support role.

Food, a Constant Worry for Many Missourians

Food pantries are on the front lines of food insecurity and outright hunger in Missouri.

Missouri is ranked seventh in the nation in food insecurity, according to Feeding America, the largest domestic hunger-relief charity in the United States. Missouri has also the fifth highest rate of child food insecurity in the country. Almost 17 percent, approximately 990,770 Missourians, used a food pantry in 2009.

The IFCS’s Missouri Hunger Atlas shows an increase of food insecurity in Missouri – from approximately 10 percent in 1997 to more than 15 percent in 2010. 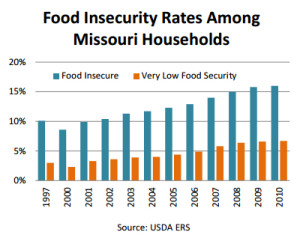 Across the United States, food pantries are a part of the food safety net for 5.6 million individuals, or 4.8 percent of all of the U.S. population. In fact, since 2007 when the current recession began, the number of food pantries has risen over 20 percent.

In addition to the seed distribution and education, Grow Well partners with local organizations to form wellness groups to identify high priority health and nutrition needs and develop strategies to address those needs.

“In some communities, we are inviting other agencies to offer education and services at the food pantry during distribution hours. In other places, the focus is on starting or expanding a community garden,” McKelvey said. “Like our gardening component, we don’t tell people what to grow or what to do in their community. We see what they are interested in and start from there.”

Local groups have stepped in to help the gardeners be successful, too.  Orscheln’s in Shelbina gave discounts on equipment purchases, the Master Gardeners in Boone and Audrain Counties provide advice and the St. James High School Greenhouse Class raised 256 tomato transplants for the project. 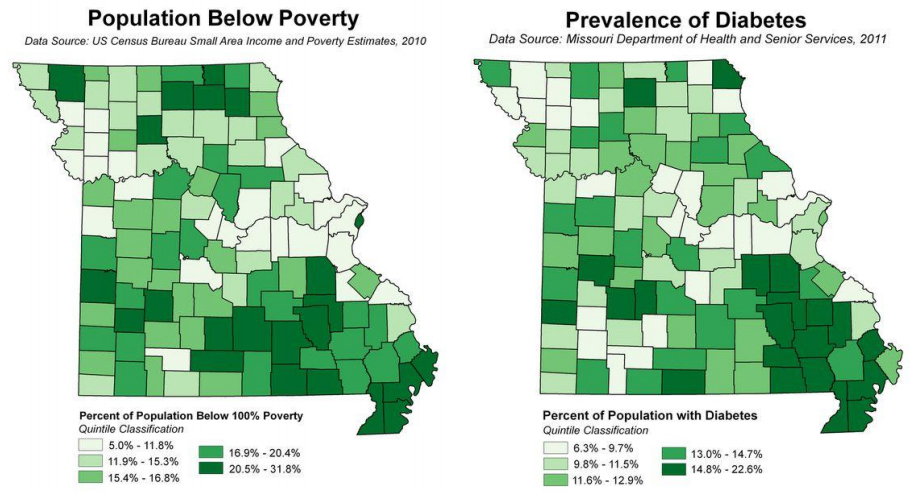 A grant from the U.S. Department of Agriculture helped lay the foundation for the project. In 2013, additional funding from the Missouri Foundation for Health helped formally launch Grow Well Missouri. The project partners with the Food Bank for Central and Northeast Missouri, University of Missouri Extension and the Missouri Food Bank Association. Grow Well Missouri is working with the Health Communications Research Center in the MU School of Journalism to research clients’ needs as well as to create messages, educational materials and programs for the project.

The ICFS is part of the MU Division of Applied Social Sciences, which is also studying the impact of informal child care in rural areas and the shift in Missouri’s population from rural to urban areas.

The next phase of Grow Well involves creating a peer-to-peer network for food pantry directors, staff and volunteers.

“The folks who operate food pantries do great work and are very dedicated to serving their community,” McKelvey said. “Our hope is to help them network with one another, to learn and share ideas. Ultimately, this will allow food pantries to identify and cultivate relationships both within and outside of their communities, to give them a stronger footing over the long term.”