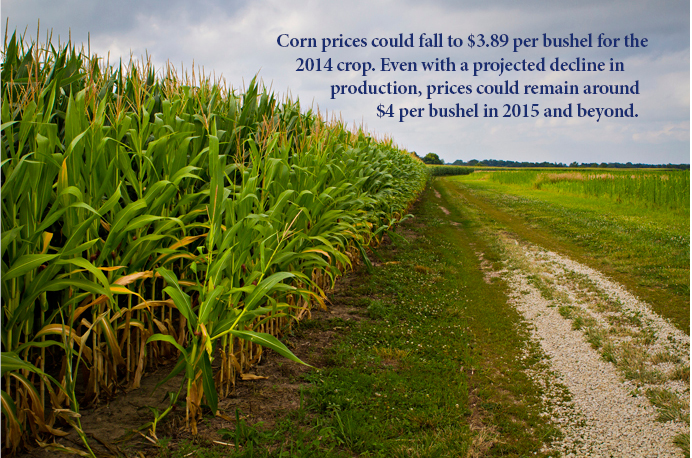 Prices for cattle, hogs and milk are at record highs in 2014, but prices for grains, oilseeds and cotton have declined sharply from recent peaks, according to the Food and Agricultural Policy Research Institute (FAPRI). This report updates the 2014 FAPRI-MU long-term baseline to reflect information available in mid-August 2014.

The baseline update uses 2014 acreage, yield and production estimates included in USDA’s August 2014 Crop Production report. These estimates reflect the first objective yield estimates of the year, and will be subject to further revision, said Pat Westhoff, FAPRI director. Final market outcomes are certain to differ from these projections, perhaps in important ways, as weather and other factors will contribute to continued market volatility, he continued.

Given all of the assumptions of the analysis, here are a few highlights of the results:

This baseline update assumes a continuation of current agricultural and biofuel policies. In some cases, there remains considerable uncertainty about how legislation will be implemented, Westhoff said. This baseline update is not a forecast of what will happen, but is intended to provide a plausible reference point that can be used to evaluate alternative scenarios.

The U.S. and world economies are forecast to grow at a faster pace, with U.S. growth exceeding three percent per year from 2015-2017. Inflation remains moderate, but interest rates increase after 2015. Oil prices dip in 2015 and then increase slowly.

For more detail on the livestock, poultry and dairy sectors and on consumer food prices, see a companion report by the MU Agricultural Markets and Policy team, at http://amap.missouri.edu/