This is the first time that ducks have been so closely tracked during the entirety of their migration from Canada to the American Midwest and back again.

Scientists now have baseline information for future research into what influences migration flight paths, landing site selection and foraging behavior. The data will also be useful to conservationists looking for ways to ensure healthy duck populations into the future.

The research was conducted by the College of Agriculture, Food and Natural Resources at the University of Missouri, U.S. Geological Survey, Missouri Department of Conversation, the Arkansas Fish and Game Commission, Ducks Unlimited and Ducks Unlimited Canada. 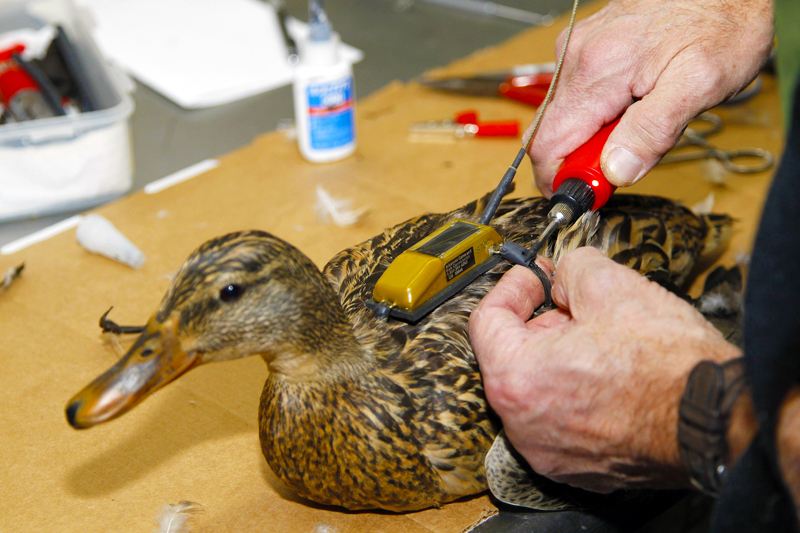 A scientist adds the tracking device to a mallard before its migration flight. Photo courtesy Mike Wintroath, Arkansas Game and Fish Commission.

Lisa Webb, cooperative assistant professor of wildlife at MU and research ecologist with the USGS Cooperative Research Unit, said the research shows private lands enrolled in the USDA’s Wetland Reserve Program (WRP) have become a critical component of the ducks’ migrations. The WRP provides landowners with technical and financial support for restoring and maintaining wetland areas that have conservation benefits.

Sanctuaries on public areas such as state wildlife management areas and the National Wildlife Refuge System are also extensively used by migratory ducks.

The National Wildlife Refuge System is the largest protected area network in North America specifically designated for wildlife conservation and includes more than 150 million acres stretching from Alaska to the Caribbean.  The program is designed to maintain wetlands and other wildlife habitat in areas where surrounding lands have been converted to golf courses, cities and agriculture.

Identifying ways to support duck populations is important because more than 50 percent of American wetlands have been lost since 1800, said Dylan Kesler, co-investigator and MU assistant professor of fisheries and wildlife. This loss has affected migratory bird populations and migration timing and routes, he said.

The project attached small solar-powered tracking devices to the ducks, which transmitted their locations every 4 hours. Data were bounced off a satellite and sent to the researchers who monitored the ducks’ progress in real time. 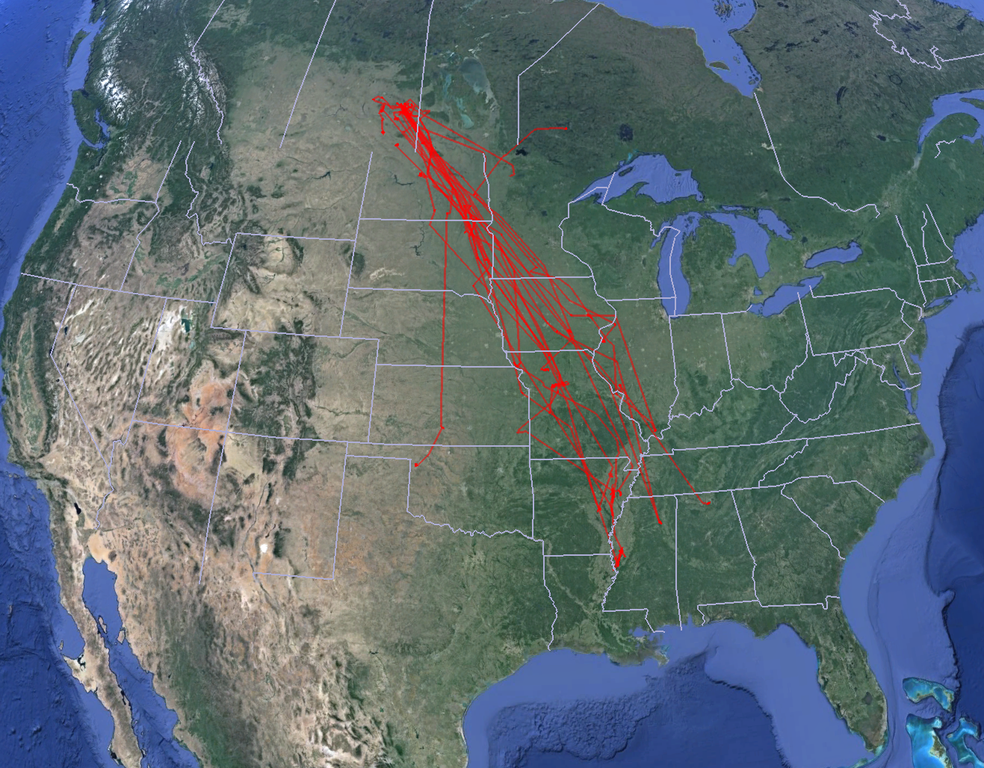 The satellite tracker followed the ducks from Canada to Mississippi. This is the first time that this data has been captured.

“This allowed us to evaluate their behavior and biology on an exceptionally detailed scale throughout their annual migration cycle,” Kesler said. “Previously, we only knew when the birds left and when they arrived and little else. Now, we have an extensive dataset from which to understand the role of different habitats and other factors in migratory populations. We can begin to understand migration in a way that it has never been understood before.”

Kesler points out that scientists also now know more about the pre-migratory feeding habits of the ducks. The ducks’ ability to gain weight before their long flights is an important factor in how many will make it to their northern breeding grounds and southern wintering stations.

A Starting Place for Future Research

The new dataset is so extensive that post-doctoral fellow of MU Fisheries and Wildlife Sciences William Beatty is using the information as the basis for a computer model to understand future migrations and the effect that human populations, physical obstructions, agriculture and conservation areas may have on migratory bird populations.

The satellite tracking data showed the researchers something not known until now – during their migrations ducks forage for food up to 20 miles away from their roosting areas. Beatty said this discovery shows how the conservation areas being used by the ducks can be improved. He recommended establishing multiple types of conservation areas in selected locations to promote wetland habitat diversity to give birds a variety of food choices.

The research results were recently published in Biological Conservation.

The mallard is probably the most familiar and abundant duck in North America. The male has a green head and chestnut breast while females are mottled brown. Both sexes have a blue speculum (wing patch) bordered on both sides by white.

The mallard nests in the spring throughout Canada and northern U.S., with eggs hatching in April and May. They migrate to a winter home in the Midwestern and southern U.S. in September and October. They take off back to Canada in February and March.

“The role of habitat conditions during the non-breeding season – fall migration, winter and spring migration – is not fully understood,” Webb said.  “Now that scientists and conservationists better understand which habitat features are important to mallards during the non-breeding season, we can begin to consider how results may help conservation agencies as they decide where to restore new wetland habitat for waterfowl.”