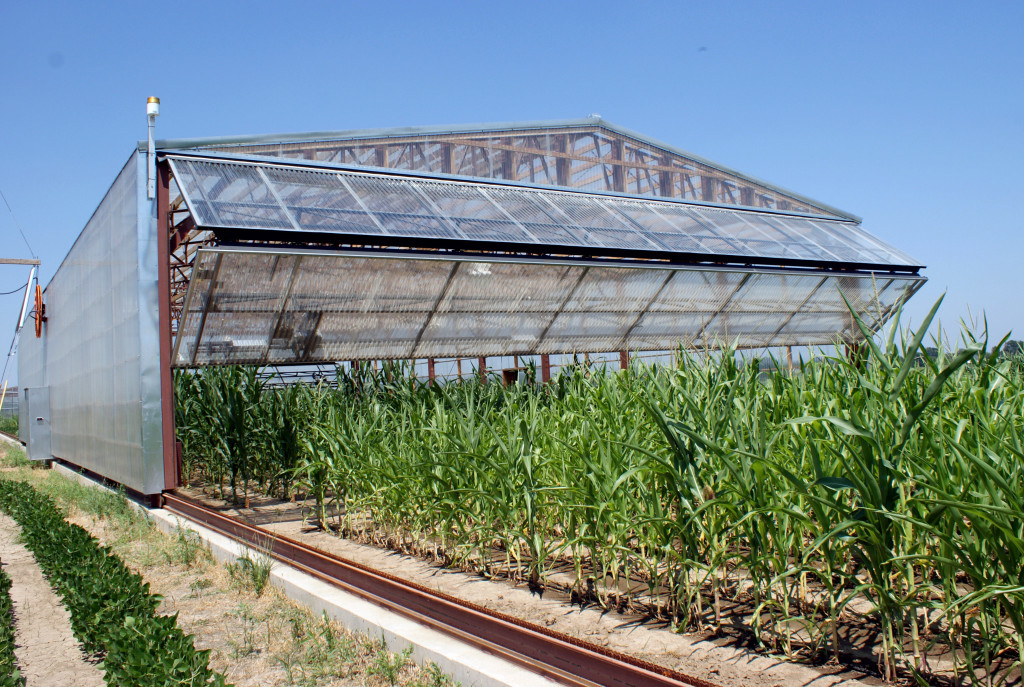 One of two drought simulators at Bradford Research Center where scientists measure the effects of water deficiency on crops.

Droughts have a devastating effect on farms. In Missouri and most of the world, droughts are the leading cause of crop failure. They increase consumer costs, kill livestock, reduce crop yields and trigger wildfires and dust storms. They also can cause malnutrition and famine, social unrest and political instability.

To combat these drought problems, researchers at Bradford Research Center have turned to making it dry every year in the two drought simulators on site. The simulators enable the scientists to study how reduced water availability affects plants and crop productivity.

The shelters look like 50-by-100-foot greenhouses on railroad tracks. They move away from test plants when the weather is sunny and cover the plots when rain approaches.

“This project provides Missouri scientists with state-of-the-art field facilities to conduct a broad range of drought-related translational research,” said Felix Fritschi, an assistant professor in CAFNR’s Division of Plant Sciences, who leads the effort. “Our objective is to take laboratory discoveries in basic plant drought research and develop real-world products and practices to improve food security and increase profitability for farmers.”

“Water is a finite resource that is in great demand for a wide variety of reasons, including domestic, industrial, leisure, landscape and agricultural uses,” Fritschi said. “In light of population increases and greater demands for non-agricultural water uses, more and more emphasis must be placed on efficient use of water resources for plant production. The drought simulators provide us with a new tool to study how agricultural water use efficiency can be improved.” 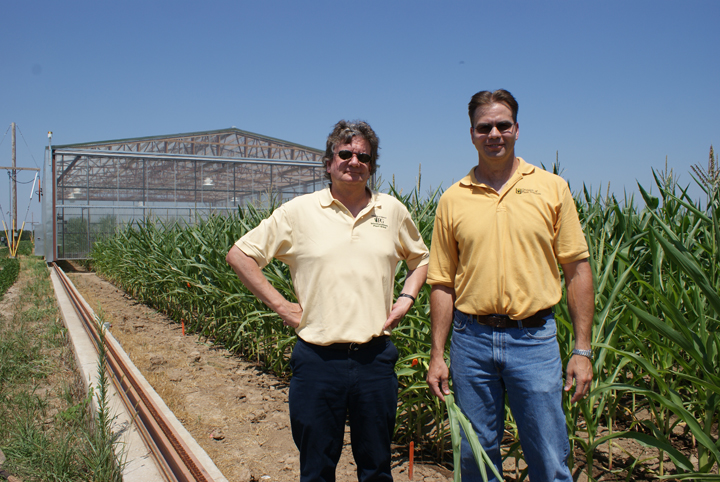 Plant responses to drought are complex and difficult to study, says Robert (Bob) Sharp, a co-investigator and professor of plant sciences.

“The ability to manage the timing, duration and intensity of water-deficit stress under field conditions is essential to examine plant responses to drought,” he said. “Thus, the drought simulators bridge the gap between controlled environment facilities, such as growth chambers and greenhouses, and real conditions encountered in the field.”

With the drought simulators in place, researchers are able to develop new germplasm with increased drought tolerance, discover genetic and physiological mechanisms that underlie drought adaptation in plants, evaluate drought-related cultural practices that increase crop productivity and study the influence of water deficit stress on soil-plant-insect and soil-plant-pathogen interactions.

In the Missouri River Basin, one part or another experienced drought in 90 out of the 100 years studied, according to the National Drought Mitigation Center. The impact of drought not only affects crop production but also strikes associated industries, such as the $40 billion American beef cattle industry, which relies on grain crop production or forage to feed livestock. Yield limitations caused by water-deficit stress are likely to intensify, as most global circulation models call for climate scenarios that will worsen drought in many regions, Fritschi said.

“The value of Missouri crop and forage production amounted to more than $3.4 billion in 2006,” he said. “Increased plant productivity under drought conditions promises to have a significant positive effect on crop and forage yields, which will be magnified by any increased productivity on the $2.9 billion Missouri livestock industry.”

Of particular note, Sharp said, several members of the group have expertise in the critically important but under-studied area of root biology— including Fritschi and Henry Nguyen, director of the National Center for Soybean Biotechnology housed at MU. Sharp has been studying the physiology of root growth under drought since he joined MU in 1986, and he recently received a grant from Monsanto to expand his research on root growth regulation in water-deficient maize.

The rain shelters, he said, provide a vital facility for these and other MU researchers to translate their basic discoveries of drought to the delivery of more drought-tolerant crops to the doorsteps of American farmers.