The rev of a Briggs and Stratton, the sweet smell of diesel, and the sparkle of freshly engineered farming equipment—with one club at Mizzou, they can have it all. And a second place title from this year’s international competition.

The Torq’N Tigers, University of Missouri’s quarter scale tractor engineering team, travelled to Peoria, Ill., during the last weekend in May to compete in the 17th annual International Quarter-Scale Tractor Student Design Competition. Organized by the American Society of Agricultural and Biological Engineers (ASABE), the competition stacks teams from 27 universities from the United States and Canada against each other to race tractors specially engineered to pull a sled weighing between 5,000 and 7,000 pounds. 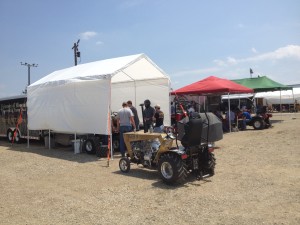 Team gets Tiger X ready to haul some serious weight in tractor pull.

Upon registration, teams are given a 31-horsepower Briggs and Stratton engine and a set of Titan tires, and then it’s up to them to design and build the rest. Throughout the competition, students gain “practical experience in the design of drive train systems, tractor performance, manufacturing processes, analysis of tractive forces, weight transfer and strength of materials,” according to ASABE.

Before the competition, teams prepare their vehicles to be evaluated on innovation, manufacturability, serviceability, maneuverability, safety, sound levels and ergonomics. Additionally, teams prepare a 25-page written design report detailing every design decision made by the team, and a 10-15 minute oral presentation simulating the pitch process many engineers go through in the professional world.

“I would consider this year to be our most successful year because it was only the second time the club has been able to complete both an A-team and an X-team in the same year,” said treasurer Dexter Barmann, agricultural systems management major in his third year on the team.

Barmann’s contributions as treasurer helped the team secure funds to build the best tractor from the right parts.

“We build a budget each year with funds coming from CAFNR, the College of Engineering, and private sponsors. Some of our private sponsors this year included ADM, Langley Metal Works, Monsanto, Line-X of Mid-Missouri, and Danuser Machine Company. Without our sponsors we would not be able to build a tractor and compete,” he said.

While designing and preparing the tractors during the year prior takes lots of work and dedication, the tractor pull is perhaps spectators’ favorite part of the competition. Success is measured by the distance a tractor can pull in four rounds, two pulling a 1,000 lb. sled and two pulling a 1,500 lb. sled. In addition, each tractor is driven through a special course designed to test maneuverability. 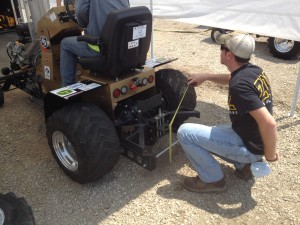 “Tiger X’s new design innovation was a mechanical CVT (Continuously Variable Transmission) for improved pulling performance, which is the first year Torq’N Tigers has used this. It also featured an adjustable dash and a quick change rear end for ease of changing gear ratios,” Ahart said.

For more information about Torq’N Tigers or how to get involved, visit their Facebook page.