Strauch and Taxis's team for the ten-day institute (From… Expand ▸

Captive Wild Animal Management instructor Trista Strauch, along with Tasia Taxis, animal science Ph.D. graduate research assistant, have been named Education Fellows in the Life Sciences by the National Academy of Sciences. This honor comes from having been selected for and participating in the 2013 National Academies Summer Institute on undergraduate STEM education. The fellows attended the summer institute from June 2nd to 13th 2013 at West Virginia University with teams representing 14 other American universities and colleges. Fellows attended classes and workshops aimed at “fostering innovative approaches to teaching undergraduate biology.”

A year from the summer institute, Strauch and Taxis reflect on their experience and are eager to share what they gained with Mizzou. 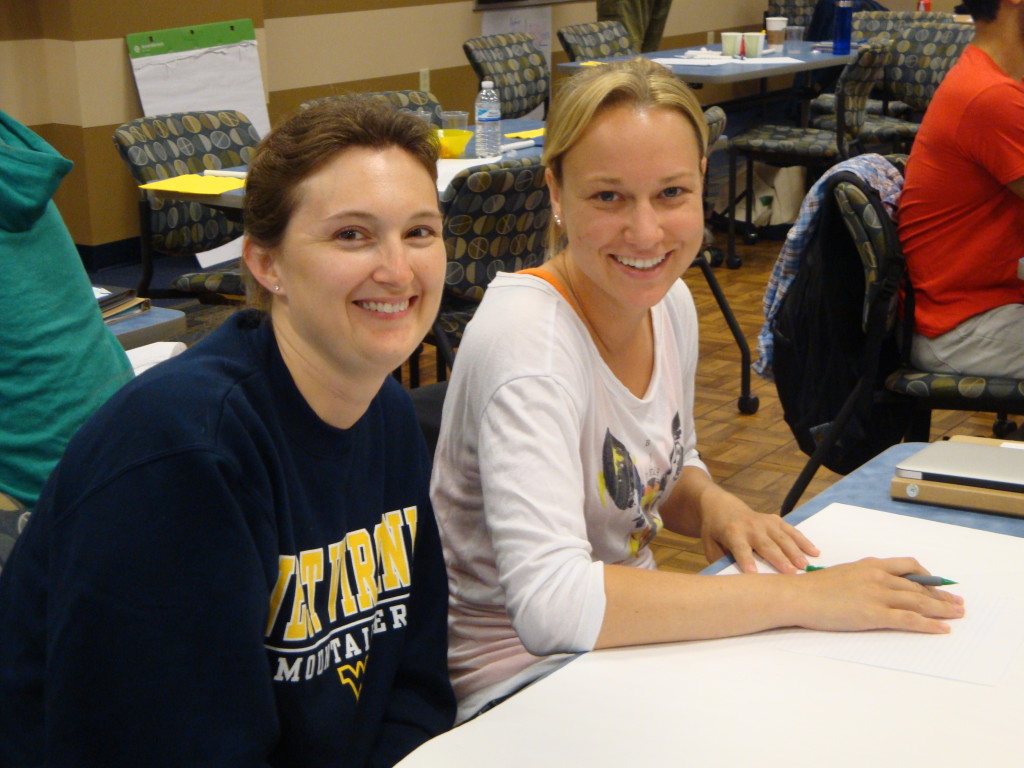 Trista Strauch (left) and Tasia Taxis (right) working hard at the 2013 National Academies Summer Institute.
“I am still amazed at the delivery of material during the academy,” said Taxis. “During the week I felt like I stepped back into undergraduate courses, staying in the dorm room and having homework every night.”

Strauch said the week and a half of intensive workshopping and discussing allowed for the fellows to feel “feel rejuvenated and refocus my own teaching philosophy.”

Over the course of ten days the teams focused on core themes of active learning, assessment and diversity in the classroom setting and developed “teachable tidbits” to enhance undergraduate education. The fellows were then to implement their “tidbits” in a course during the coming academic year and assess how well students responded to the unit.

Strauch and Taxis were on a team with two members from W.H. Freeman Publishing and a team facilitator, Director of biological science program at Michigan State University. The tidbit series they created addressed the hurdle many undergraduates face to correctly define and understand the biological concept of “mutation” and tie mutation to an organism’s “fitness.”

The tidbits were arranged in a four-part series of activities, utilizing “think-pair-share” and active learning strategies.

“The most important thing is to make sure it is active learning and not just active,” said Taxis. “Just because students are ‘doing’ something and being active in class does not translate into active learning.”

The first tidbit would allow for students themselves to define mutation and facilitate group discussion to agree upon a working definition. The second tidbit aimed to address the common misconception that mutations always yield negative results. In the corresponding activity, students all received scenarios describing the same mutation, but half the students were given information about its positive effects, and the other half was given information about its negative effects. The class then engaged in group discussion to find that any given mutation can be positive, negative or neutral. The next tidbit integrated real-world examples of mutations in human populations affecting diseases, and the last tidbit zoomed out to look at how mutation fits into genetic variation in populations.

Strauch and Taxis each integrated these new teaching strategies into their classes over the last academic year, Taxis teaching Biology 101 at the community college and Applied Livestock Genomics at MU, and Strauch teaching Introduction to Captive Wild Animal Management, Introductory Zoology, and Senior Seminar in Wild Animal Management all at MU.

Taxis said the students in her courses responded positively to the new methods. “The Biology 101 students had more positive comments on their student evaluations and their average test scores were generally higher,” she said.

Strauch noted an improvement in student engagement and participation.

“Getting the students to participate in activities early on allowed them to open up further and ask more pertinent questions as we moved through the material,” she said.

One of the techniques both fellows took from the institute was backward design. This strategy involves designing learning as a scientist would an experiment.

“Starting at the end — what you want the students to know and be capable of explaining — and then designing the activities and assessment around that goal. I have not always started that way in the past, and I wish to redesign and reconsider as I move my courses forward,” said Taxis.

The institute originated as a result of a 2003 report issued by the National Academies’ National Research Council emphasizing the role of evidence-based pedagogical teaching approaches in student learning. By implementing new strategies for teaching university biology, the National Academy hopes to increase undergraduate science education, “which is essential for preparing both scientists and scientifically literate citizens.”