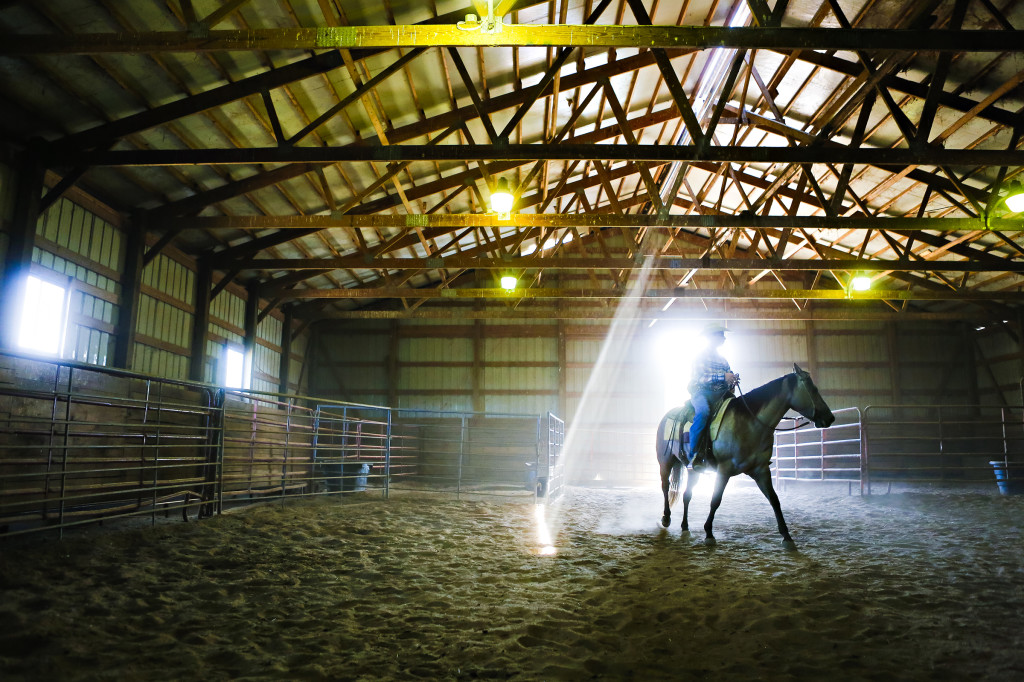 Zane Volkmann always wanted to be a horse trainer. A serious accident weeks before his senior year of high school slowed his gait, but it didn’t throw him. He cinched up his saddle and began the ride of his life. “You just pick your lip up off the ground and go ride,” he said.

Volkmann fell 9 feet on his head at a livestock center in August 2012. Young riders working cattle there enjoy riding horses under overhead pipes jutting from the barn and swinging from them. 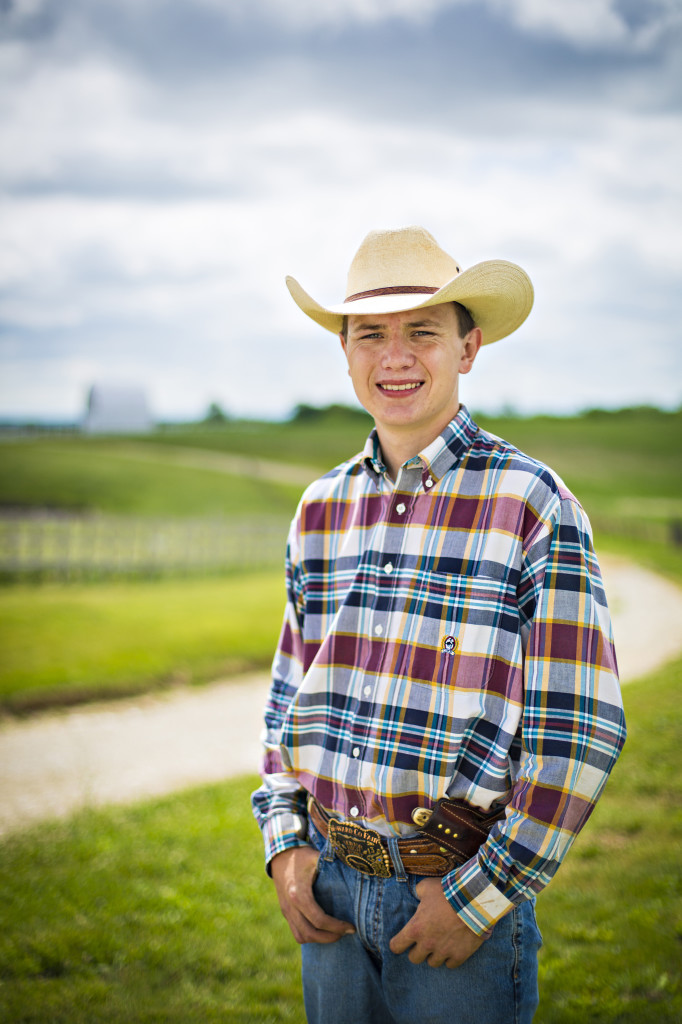 He’d done it dozens of times before, but this time the momentum propelled him into the air and hurled him to the ground. He suffered three brain bleeds and a broken back.

AgrAbility connects injured farmers and ranchers with resources so that they can remain on the farm or in the saddle. Resources include referrals to and coordination of services with other agencies, financial assistance for adaptive devices, and ongoing moral support and education.

The Missouri AgrAbility Project is part of MU Extension; the MU College of Agriculture, Food and Natural Resources; and the Brain Injury Association of Missouri Inc., in cooperation with other partners.

Volkmann stayed out of the saddle for six months – “the longest six months of my life” – as he and his family learned to adapt to the “new Zane.”

Despite challenges, Volkmann graduated on time, fifth in his class. He recently completed his freshman year of equine ranch management studies at Northeastern Oklahoma A&M College.

Funkenbusch advises him as part of his summer internship at a Howard County ranch. She sets goals with him to lay the groundwork to develop a business as horse trainer and farrier. She also encourages him to avoid a second injury by wearing a helmet when riding an unfamiliar horse or on difficult terrain.

“AgrAbility helps you in every aspect of your injury,” Volkmann says. “They drive me forward. Just because you have a brain injury, it doesn’t mean you can’t perform at your full potential.”

“The passion of farmers is our passion,” Funkenbusch said. “We want that farmer to stay in the saddle of their horse or in their tractor seat.” 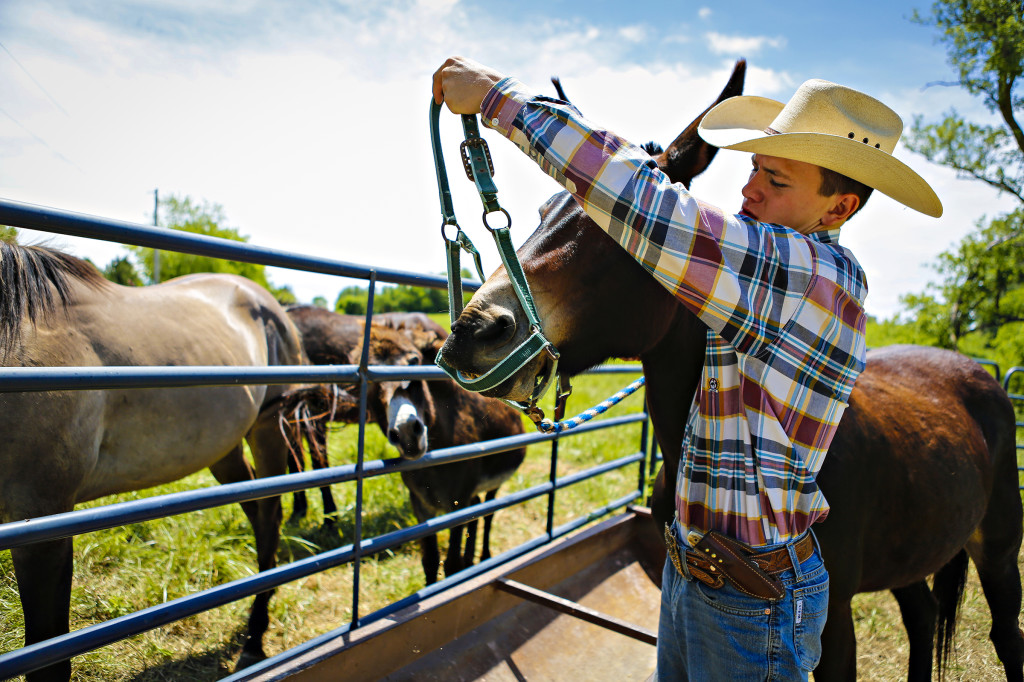 Zane works with Pearl, a mule owned by the Wayne and Micki Frey. The sometimes-stubborn mule needs an occasional attitude adjustment by Zane.

Skills to Help Pay for College

Volkmann’s calming voice and the cadence of his spurred cowboy boots on the barn floor beckon the curious horses to stick their muzzles through the bars of their stalls. Stringer, a blue heeler mix, shadows his moves, never far behind.

Most days he shoes horses or trims hooves as well. It’s a trade he’ll take with him to college this fall to pay for his education.

Today, he saddles a colt for its first time. He “round pens” the colt, throws kissing sounds its way and gains trust and control with a series of cues and signals like he’s done for months. “Trust don’t come overnight,” he says.

The sound of the trainer exhaling, tone of voice and stance command the horse to walk, trot or lunge in a specific direction. 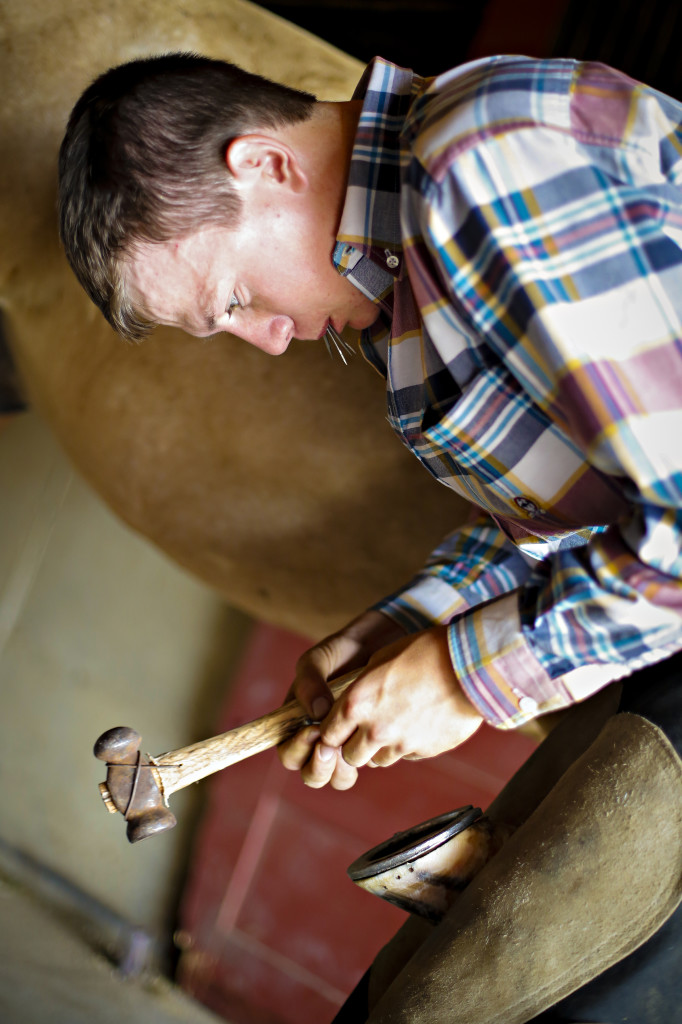 The colt yields to him when he lets the horse smell and feel the saddle before putting it on its back and cinching it. “You have to let him realize this ain’t a horse-eating saddle,” he says. Meanwhile, he’s “getting lovey-dovey” with him with sweet talk and pats.

Although he’s gentle, there’s no doubt about who is in charge. “I’m the boss,” he says. “It’s my way or the highway.”

Familiar and repetitive cues set the stage for success. “It’s like raising a child. Consistency is the key. Don’t send mixed messages.”

Even when a colt balks or a “problem” horse challenges him, Volkmann doesn’t panic. He repeats a phrase often used by his mentor, horseman Clint Anderson: “Heart attacks are free. Let your horse have one.”

Although the day ahead is a long one, Volkmann gives no sense of rushing. His dawn-to-dusk workday is defined neither by minutes nor hours. Only after work does he indulge in riding his own pleasure horse or roping in the arena, streams of sunlight replaced by the soft glow of moonbeams.

“If you rush, you’re up a creek without a paddle,” he says. “The slower you go with a colt, the faster they are going to learn. Each colt is different.”

Volkmann also enjoys working with mules. Next week he travels to Jake Clark Mule Days in Cody, Wyoming, with two mules he exercised and trained. The event is the nation’s premier mule day sale and consignment auction.

After working at the Fuhlage ranch, he heads down the gravel road to the horse ranch of Joe Davis Jr., a cutting-horse competitor.

Volkmann broke colts for him prior to his accident and continues to do so.

Davis, a schoolteacher before he became a rancher, expects and receives no less from Volkmann, despite his injury. “Very seldom do you ever get more from a child or a horse that you expect or demand from them,” he says. “Zane has a special talent.”

Volkmann raises two fingers to the brim of his cowboy hat and tips it to his grandfatherly mentor. The respect between the two needs no words.

Both longtime 4-H members in Howard County, they each took a horse, faith and a strong work ethic with them when they left for college.

There are no passes for Volkmann. His friends, neighbors and family continue to expect no less than success. “My parents told me that at the end of the day, you will succeed. They do everything to help me succeed,” he says. “Mom and Dad said if you want something, you’ve got to get out and work for it.”

And he will. “I’ve paid my dues for a long time,” he says. “The Good Lord will open another door and it’s my job to go through it. When the Lord gives you a talent, you’ve got to use it.” 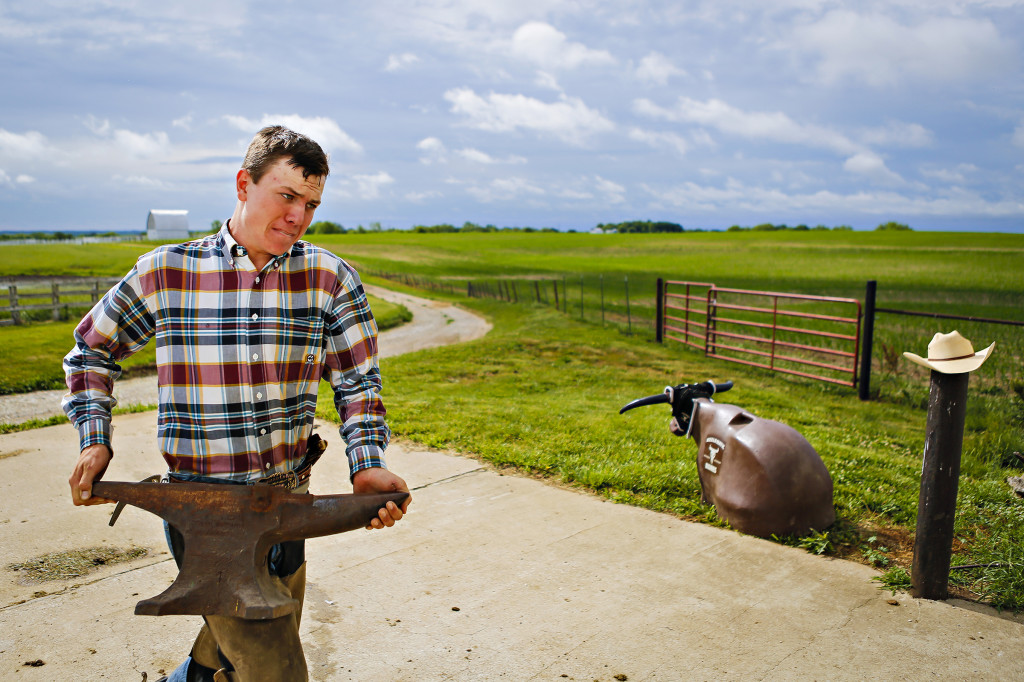 Zane carries an anvil from his truck to the horse arena. He uses the timeless tool to help reshape and fix horseshoes.