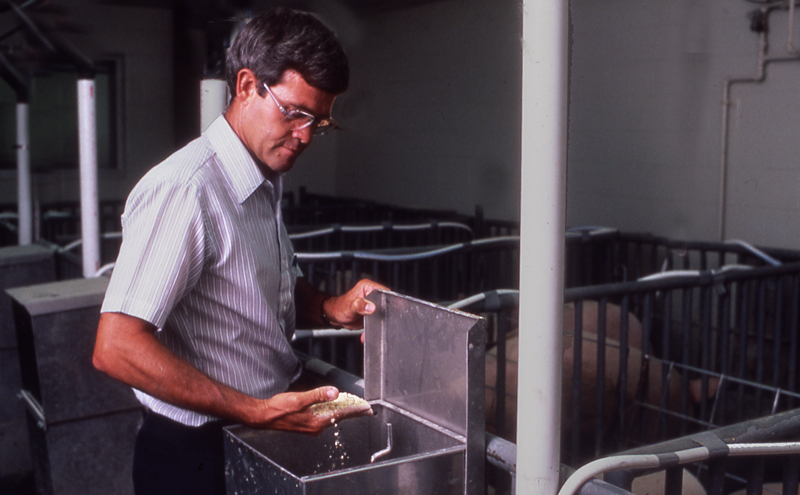 George Jesse, chair of MU Animal Sciences from 1995 to 2001 and later director of undergraduate studies, first set foot on the MU campus 50 years ago as a new freshman. He retired last year after more than 35 years of teaching, advising and mentoring.

A 2010 Celebration of Excellence winner for Outstanding Undergraduate Adviser, his former students looked to him for advice on their future and he was always happy to give it. Students trusted him with their aspirations and he would spend hours providing them with excellent advice. He also guided many though Study Abroad programs, which are often life-changing experiences.

During his career at CAFNR he earned virtually all college honors including the Excellence in Teaching Award, Outstanding Advisor Award, University of Missouri Faculty-Alumni Award, and the College of Agriculture Award for Exemplary Contributions. 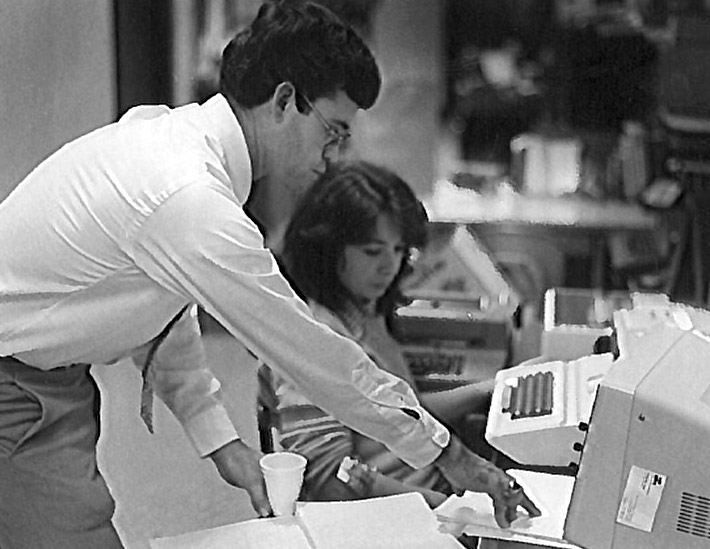 George Jesse instructs a student in use of one of the earliest computers on the MU campus.

What brought you to study and teach animal science at the University of Missouri?

This simple question cannot be answered in five sentences or less; in fact, perhaps I cannot answer the question at all, but I will attempt. I really must give you an overview of how I became a college professor with a career focused on student advising and teaching.

I grew up on a small farm and remember that my goal was to simply become a livestock and grain farmer like my dad. So, even though I had some excellent teachers in elementary school and high school that urged me to consider college, I rejected their good advice and farmed with my father after graduating from high school. After two years of essentially not making much money because of crop failures due to drought and low prices for beef cattle and hogs, I decided I needed to find a different career.

With help of my vocational agriculture teacher at Mexico High School I enrolled at MU in the College of Agriculture as a 20-year-old freshman in the fall of 1964. I started out as an undeclared major since I had no idea what college was all about.  However, after one semester my advisor in the Department of Agriculture Engineering told me that due to my interest in animals he was going to transfer me to Dr. A. J. Dyer in the Department of Animal Husbandry for advisement. I had a great experience as an Animal Science major and must say I can never repay the debt I owe to many great professors in the College of Agriculture at MU.

At the time of my graduation in the spring of 1968 I was fortunate to have three job offers; however, I had decided I wanted to work for the University of Missouri Extension as a livestock specialist. 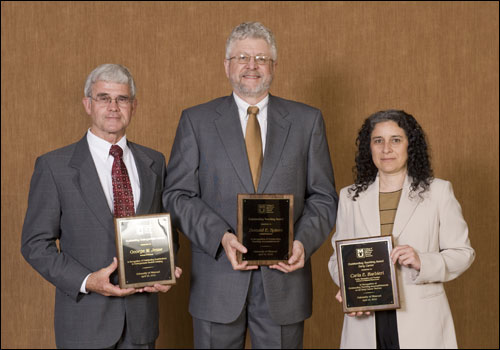 I interviewed for this position that spring, but unfortunately I was told that I was not qualified as the University had just made a decision to require a master’s degree of all new hires. Since my wife had been waiting two years for me to complete my education and we were expecting our first child in June, I knew the reasonable thing to do was to accept one of the three job offers and go to work.  However, I really wanted that extension position.

I visited with my advisor and found out he needed a graduate student and offered me a graduate stipend. After visiting with my wife, I decided to turn down all of the job offers and go back to school three weeks after commencement to pursue an M.S. degree in Animal Husbandry.

In August of 1969 I completed the M.S. degree and accepted a position as Area Livestock Specialist for the University of Missouri headquartered at Harrisonville, Mo. I really liked this job, but unfortunately I changed jobs after 15 months for the opportunity to make a larger salary in sales. I moved my wife and daughter from Harrisonville to the St. Louis area and went to work for a major feed company as a feed sales trainee. It took me less than two weeks to decide I had made a huge mistake.

I called my undergraduate advisor, Dr. Dyer, and confessed that I had really screwed up. He told me if I needed some time to get my life back together that he had a position he could offer me for a couple of years. I accepted his offer as an Instructor and returned to MU on Jan. 15, 1971. By June, Dr. Thompson in the department offered me the opportunity to pursue a Ph.D. in Animal Husbandry. 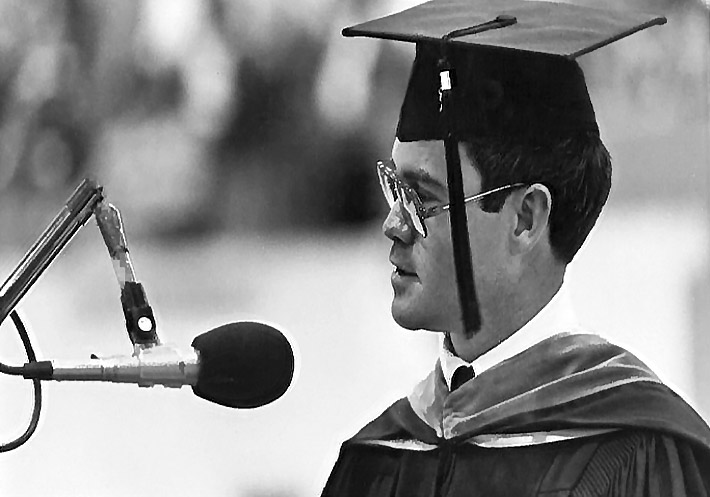 From student to commencement speaker.

Although I had certainly not planned to pursue a Ph.D. I accepted Dr. Thompson’s offer. In the fall of 1971 I was given the responsibility of serving as Advisor Chair for the Animal Husbandry Department, which included assigning advisors to students and also serving as an advisor of students. During the next four years I advised approximately 100 students each year and served as instructor in several introductory Animal Husbandry courses.

My guess is this was the beginning of my interest in college teaching. After completing my Ph.D. with the help of my graduate advisor, Dr. G.B.  Thompson, I was able to obtain an Assistant Professor of Animal Science position at Texas A&M University in College Station. This was a 100 percent teaching assignment which included a heavy undergraduate advising responsibility.

I liked this position. However, I quickly learned that teaching alone would not lead to tenure. As a result, I started looking for a position that would include teaching and research. Well, to make a long story a little bit shorter I learned that MU had a new position in Swine Management.  My M.S. and Ph.D. degrees had both been with beef cattle. However, I told MU I was willing to switch from cattle to hogs. So, I returned to MU on August 15, 1977, to begin a 40-plus year career.

The bottom line is I never intended to go to college and I certainly never expected to go beyond the B.S. degree; but, I am so thankful that I was given the opportunity. I owe the University of Missouri a debt that can never be repaid; but, I do hope I have helped some young people during my 40-plus years like I was helped by faculty at MU.

I asked him what college he was referring to and he said the University of Missouri. I learned Mr. Redhair had given me the correct answer and, in my opinion, nothing has changed. MU’s CAFNR is still number one in my mind. 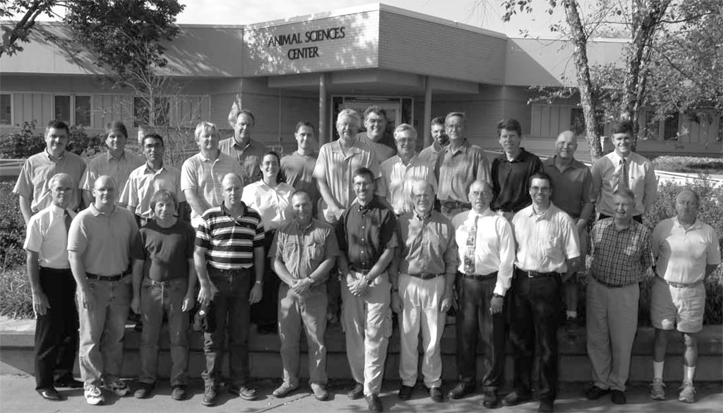 The MU Animal Sciences faculty in 2006 — the 100 year anniversary of the division. George Jesse is in the first row, far left.

What single accomplishment are you most proud of in your teaching career?

I always tried to make students my number one priority. I wanted students to know that I was sincerely interested in their future. In reflecting on my 40-plus year career focused primarily on teaching and advising I wonder how often I failed.

Your students have gone on to achieve great things. Name some who you are most proud of.

I do not feel comfortable in naming any students. I can assure you many of them have had very successful careers. However, to take any credit for their success would not be fair. I will admit I do feel like I have played a small role in the lives of some of the former students and I have many fond memories of attempting to encourage students when they needed encouragement and even to scold students when I felt they needed some scolding. I simply hope some of the students I have had over the years will have at least one or two fond memories of me in my effort to enhance their educational experience.

Where should MU Animal Sciences go in the next decade?

My hope is the MU Animal Science Department will continue to be the place for students with a passion for animal agriculture to obtain one or more college degrees.