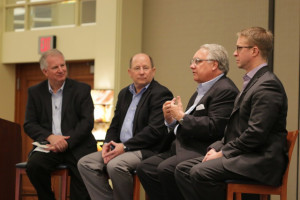 Dr. Rob Myers from MU moderating the opening panel session at the National Conference on Cover Crops and Soil Health.

This summer, Rob Myers, an adjunct associate professor in the College of Agriculture, Food and Natural Resources, will receive the President’s Leadership Award from the Soil and Water Conservation Society.

The SWCS is a nonprofit scientific and educational organization that “serves as an advocate for conservation professionals and for science-based conservation practice, programs, and policy.” The society boasts more than 4,000 members around the world, including teachers, students, farmers and policymakers.

In recent years the society has focused on the role of cover crops in sustainable agriculture. Cover crops have grown in popularity as research has continued to support their efficacy in controlling erosion, protecting water quality, increasing biological diversity and improving soil structure and organic matter content. It was this emphasis on cover crops that led to Rob Myers’ biggest role in the society to date.

Earlier this year, Myers chaired and organized the society’s first National Conference on Cover Crops and Soil Health. The conference welcomed more than 300 leaders and innovators in agriculture from across the U.S. It was held in Omaha, in February and led by the Sustainable Agriculture Research and Education program. 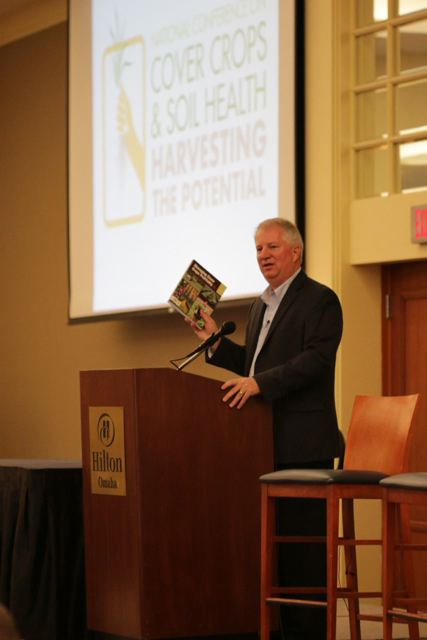 Rob Myers gives opening remarks at the National Conference on Cover Crops and Soil Health he chaired in February 2014.

The conference took an action-oriented stance to explore ways to improve American agricultural sustainability through soil health. Presentations and discussions dug into the benefits of cover crops and barriers to their adoption.

“One of the things I like to tell people about cover crops is that they help us utilize a free resource, namely sunlight, at a time of year in the early spring or late fall when the soil would normally be bare, and these cover crops turn that sunlight into a green living cover that protects the soil and feeds the diverse organisms in it, helping keep the soil ecosystem healthy,” Myers said.

Myers’ role as chair included securing funding and administering the budget for the conference, chairing a year-long planning process, and presiding over the conference during the event.

Supplementing the conference in Omaha, forums were set up at more than 200 National Resources Conservation Service offices nationwide where an estimated 6,000 people participated in local conversations on cover crops and soil health.

The SWCS President chooses one recipient each year to recognize “exemplary work in carrying out the goals and objectives of the Soil and Water Conservation Society mission of fostering the art and science of soil, water, and natural resources conservation.”

Myers will be honored at the 69th International Annual Conference in Lombardi, Ill., this July as the 2014 recipient of this award for his outstanding dedication to the values of the SWCS and success in initiating a national conversation on the importance of cover crops in modern and future agriculture practices.

“Dr. Myers has been a true leader on the issue of cover crops & soil health.  He has always impressed me with his ability to look forward and understand what pieces of the chess board need to be moved first in order to help farmers long-term,” said Alan Weber, a local ag consultant and part-time farmer who attended the conference and participated on the planning committee with Myers.

Newell Kitchen, an adjunct professor at MU and soil scientist for the U.S. Department of Agriculture, was also on the conference planning committee.

“It was an unusual event; a national conference grew out of one initial conversation of key individuals around the country who thought the time was right to discuss both progress and emerging challenges of cover crops in the U.S. Rob was at the front end of that discussion. He is a very talented visionary who sees things through beginning to end,” Kitchen said.

Since the conference, a national work group on cover crops has developed. The group, scattered all across the U.S., has been following up on discussions began at the conference and developing tangible goals concerning efforts to improve cover crop use nationwide.

Myers is also the regional director for extension programs in the North Central Sustainable Agriculture Research and Education Program. 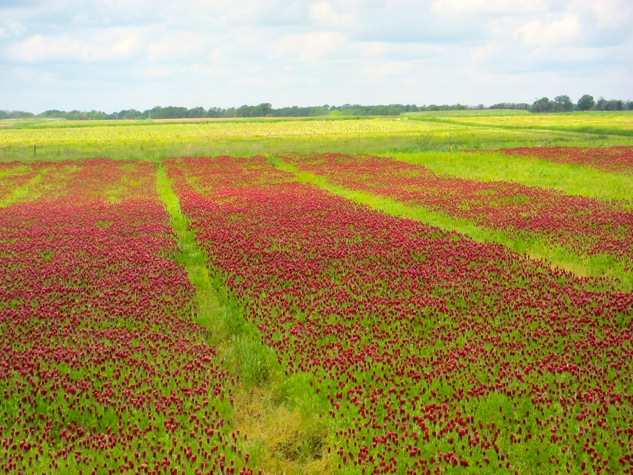 Crimson clover grown as a cover crop at MU’s Bradford Research Center in May 2013.