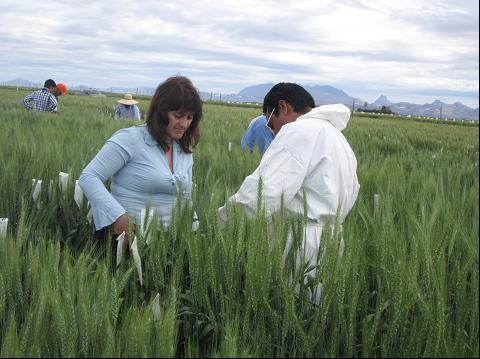 Since 2007, the University of Missouri has participated in a national program emphasizing cultural exchange and international collaboration in a research context.

Through the Norman E. Borlaug International Agricultural Science and Technology Fellowship Program Mizzou has brought scientists from all over the world to our campus, including Dr. Dobrinka Atanasovo (photo above). ‘Dobie,’ a Bulgarian wheat breeder, was hosted at MU during the spring of 2013 learning about American approaches to wheat breeding and genetically modified crops. While she was here, Dobie spent time with Missouri farmers and scientists evaluating new wheat varieties, and even traveled to the International Wheat and Maize Research Center in Obergon, Mexico. 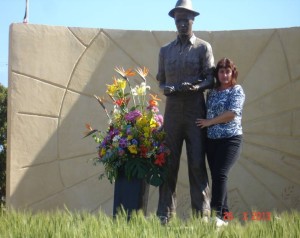 Dr. Atanasova in Mexico to visit the International Maize and Wheat Improvement Center.

The Borlaug Fellowship Program was developed in 2004 to promote “food security and economic growth by providing training and collaborative research opportunities to fellows from developing and middle-income countries.” It is jointly funded by the United States Department of Agriculture and United States Agency for International Development, and pairs researchers from various agricultural disciplines with host universities and institutions all over the United States.

The fellowship honors Norman Borlaug, an American agronomist known as the “father of the Green Revolution.” His contributions to modern agriculture and specifically wheat yield are credited to have prevented mass starvation in India and other south Asian countries in the 1960s and ‘70s, earning him the Nobel Peace Prize in 1970 for contributions to world food supply. The fellowship in his name emulates Borlaug’s commitment to agricultural advancement and international collaboration.

MU’s involvement has so far brought 36 fellows from 20 countries to campus to refine skills and experience in research and extension, as well as to gain exposure to America’s unique take on research in an educational institution.

Each year, the USDA and USAID recruit scientists from targeted countries in various specialties such as soil science, plant breeding, biotechnology, agricultural economics and biofuel development. The selected fellows are then ‘bid’ on by American universities and research institutions. The institutions each select fellows they would like to host for six to 12 weeks, based on compatibility of research and interest areas, and construct individualized plans of how they would best accommodate the fellows’ time in the US. A board then evaluates the bids and assigns each fellow to the university or institution that has presented the best bid.

Mizzou has consistently been one of the bigger players among Borlaug universities. Each year MU creates bids for a dozen or so fellows and is subsequently granted between three and eight fellows every year. With 50 or so universities competing for the chance to host fellows, MU’s numbers and consistency is quite impressive, said Kenneth Schneeberger, International Training Coordinator for MU’s College of Agriculture, Food and Natural Resources. 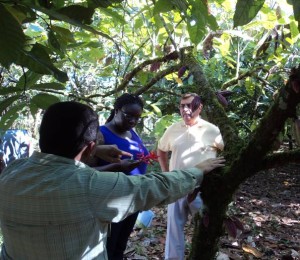 “But when you consider MU’s central location to so many big agriculture institutions and all the resources we have to offer,” he said, “it’s not much of a surprise.”

MU’s reputation as a prime host institution is strengthened every year by fellows’ glowing reviews of their experiences here. Borlaug fellows have access to Mizzou’s extensive network of agriculture and research connections: the National Center for Soybean Biotechnology on campus, Monsanto just two hours east, a USDA office in Jefferson City, the Food and Agriculture Policy Research Institute housed at MU, several wineries and vineyards near Columbia, and the Kansas City Board of Trade, just to name a few. Missouri also offers a broad range of small farms, providing fellows opportunities to gain experience in extension.

The timing of the fellowship also allows for fellows to attend the annual World Food Prize Symposium in Des Moines, Iowa, every October. In addition to attending lectures by world leaders in food production and technology in the company of hundreds of international scientific, business and policy leaders, fellows are united with others housed all over the United States.

Over the 12 weeks at MU, each fellow is paired with an MU mentor in a research area matching the fellow’s interests. The fellows learn new skills and methods, interact with Missouri farmers and integrate research from their home institution with MU research to collaborate and find new ways to improve their own research. Fellows come to MU with a set of goals they want to accomplish with their time here, and when they leave they complete an assessment of how well the visit went. Fellows always leave with their expectations far exceeded, said Schneeberger.