Steve Canyon had many girlfriends in his comic strip. Miss… Expand ▸ 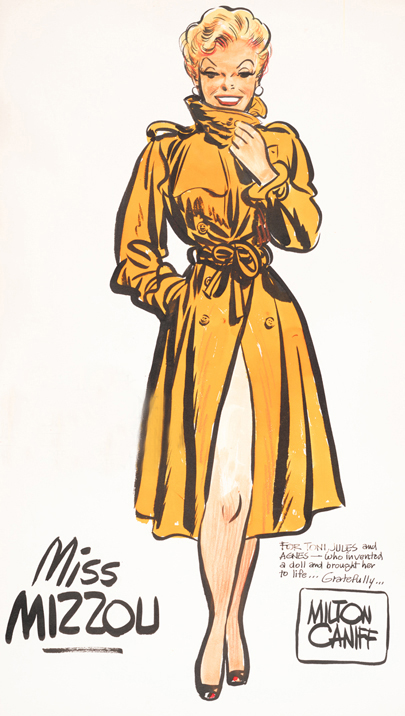 A Milton Caniff drawing of Miss Mizzou. Courtesy the Toni Mendez Collection, The Ohio State University Billy Ireland Cartoon Library and Museum.
She was tall, blond, tough yet vulnerable, lived with her sketchy past, and was never seen without her signature trench coat. From her beginning in 1952 to her passing in 1988, she was more than the pen-and-ink drawings of the other women, for she inspired calendars, airplane pin-ups, beauty contests and halftime events on the MU campus.

While Mizzou’s connection with the Beetle Bailey comic strip character is well recognized today on campus with a statue, in her day Miss Mizzou was more famous. And in Steve Canyon’s eyes, she was more interesting than some college foul-up with a funny hat.

An Artist and His Women

Milton Caniff (1907–1988) was an American cartoonist famous for the Terry and the Pirates and Steve Canyon comic strips. Born in Hillsboro, Ohio, he drew cartoons for local papers while in high school, and after graduation from The Ohio State University, accepted an artist position at the Associated Press, drawing a comic strip called Dickie Dare on the side.  In 1934, the New York Daily News hired him to produce an action-adventure comic strip called Terry and the Pirates, the strip that made Caniff famous.

One of Caniff’s most famous characters in Terry was the Dragon Lady, a pirate queen. Ruthless and calculating, she was nonetheless painted by Caniff as the romantic interest of the strip.

During World War II, Caniff began a second strip, a version of Terry and the Pirates without Terry and featuring a blonde bombshell, Burma. After complaints from the Miami Herald, the strip was renamed Male Call and given a new star, the beautiful Miss Lace. Her function, Caniff said, was to remind service men what they were fighting for. While situations in the strip brimmed with ‘double entendre,’ Miss Lace was not, Caniff said, a loose woman, but she “knew the score.”

While Terry and the Pirates remained a major success after the war, it was not owned by Caniff but a distributing syndicate. Caniff dropped his involvement when the Chicago Sun-Times offered him his own strip called Steve Canyon, which, like Terry, featured a pilot as its main character. Canyon achieved a greater circulation than Terry ever had.

Like Terry, Canyon featured a squadron of strong women. One was Madame Lynx, who was based on Madame Egelichi, the spy played by Ilona Massey in the 1949 Marx Brothers movie Love Happy. The association was not accidental as Caniff hired Massey to pose for him. Caniff later hired film actress Carol Ohmart as the model for financier Copper Calhoun – the “she-wolf of the stock market.” Caniff designed Steve Canyon’s sidekick Pipper the Piper after John Kennedy. 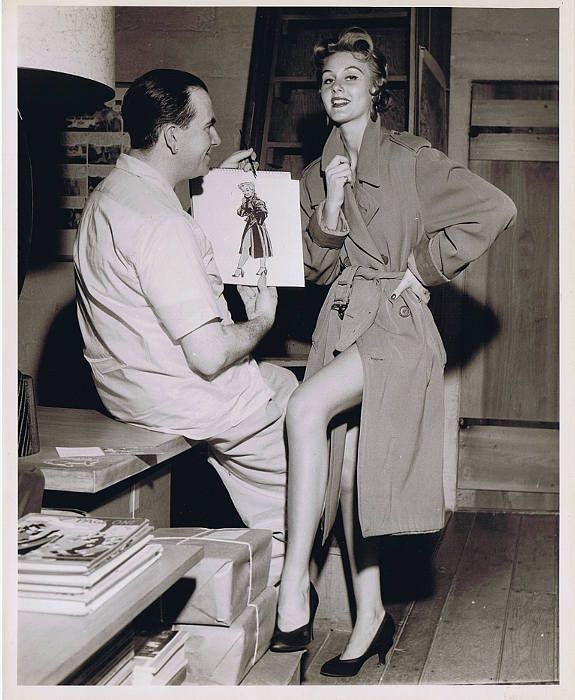 Miss Mizzou was fashioned after Marilyn Monroe. In a letter to the Missouri Alumnus magazine in 1954, Caniff explained how an “Ohio State man” came to create a University of Missouri character in 1949:

“I spent a delightful twenty-four hours in Columbia some years ago, drawn by an invitation to speak during the Journalism Week program. The happy impression of the campus in the spring went deep and lasted. When I returned to New York a subscription to SHOWME followed and I learned that the University is referred to as ‘Mizzou.’ For some time I had been mulling over a girl character who would be what a Marilyn Monroe type might be like if she had not hit the jackpot in Hollywood. Every college town has girls who live and work on the edge of the campus and who are very much a part of the life of the school, but who do not get invited to the fraternity formals. Usually they come up from small towns and often become as loyal to the school as the best-heeled alumnae. I decided my gal would be from the University of Missouri, if not of it.

“Right now I can see the faces of Missouri alumni reading this and trying to recall the name of that little doll who used to wait table at that place over on…. But don’t worry, men, it’s only fiction – it says here in this letter from my lawyer.”

Another version of the inspiration of Miss Mizzou, printed in the 1996 Mizzou Homecoming Special Edition of Mizzou Magazine, said Caniff modeled her after Bek Stiner, a blond showgirl from New York City’s Copacabana Club. Rumor is that Caniff made that change after receiving a letter from Marilyn Monroe’s lawyer.

Whether New York- or Missouri-bred, Miss Mizzou’s first comment in her debut 1952 Steve Canyon comic strip mentioned that she took her nickname as a nostalgic gesture because she regretted leaving MU and Columbia to follow a fast-talking traveling salesman.

Changing the Name of a Road in Columbia

Like his other female creations such as Princess Snowflower (victim of the Red Chinese), Poteet Canyon (teenage kissing cousin to Canyon), Savannah Gay (actress), Herself Muldoon (underworld queen) and Deen Wilderness (doctor), Caniff’s Miss Mizzou attracted a lot of attention. 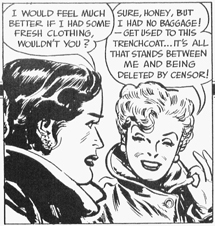 In 1959, Life Magazine published an article entitled “Famous Cartoonists Share a Silver Jubilee” that talked about the comic strip women. It got little Columbia, Mo. noticed all over the media world.

An offhand comment by Caniff was taken literally by the writer who wrote: “(Canyon) is so famous that Colorado changed the name of Squirrel Gulch to Steve Canyon. Columbia, Mo., home of “Old Mizzou” (student name for the University of Missouri), would have named a new street after Caniff except the conservative citizens protested. They suspected Miss Mizzou, a Canyon dame, wears no clothes under her trench coat.”

That comment was picked up by the Associated Press, Columbia Tribune and other media who asked when the Caniff Blvd. naming ceremony would be held. The City of Columbia put it up for a Council vote. 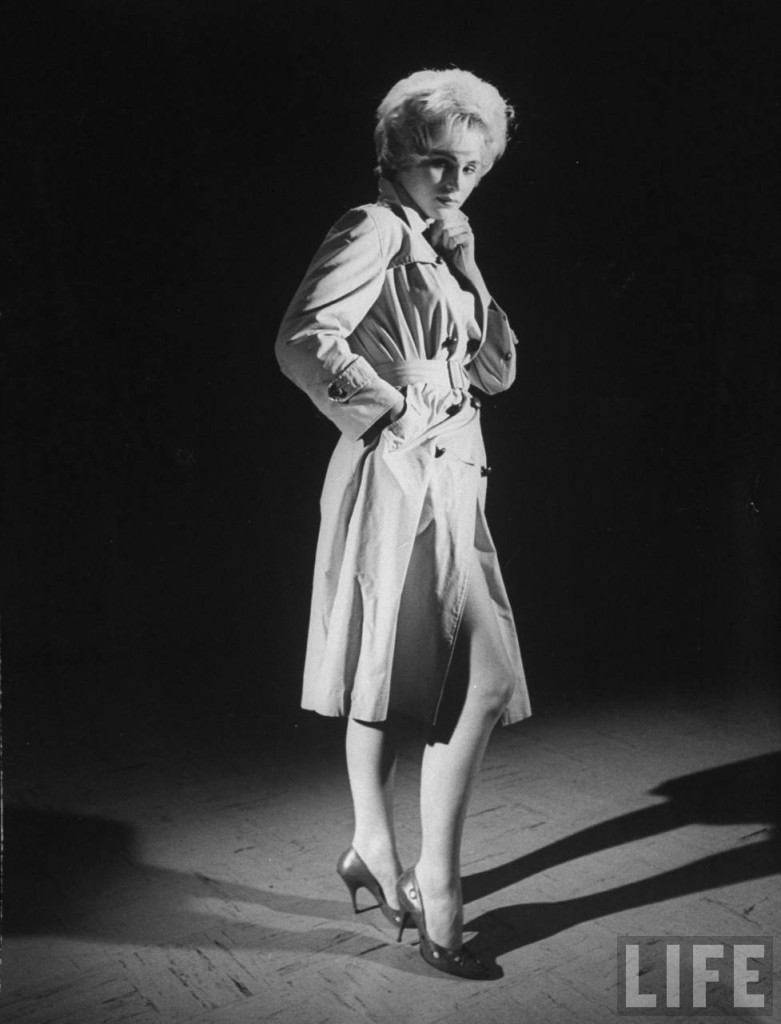 Before the vote could be taken, citizens made impassioned pleas for and against the plan. Newspaper letters to the editor discussed little else.

Mizzou students offered to buy and install the Caniff Blvd. signs.  Some of the faculty had other thoughts. Jack Matthews, dean of MU students, wrote: “I question the appropriateness of using the somewhat scantily-clad Miss Mizzou on promotional signs.” Robert Karsch, professor of political science, said: “People don’t seem to want Columbia identified with this trench coat or with what’s underneath it.”

With that, the kerfuffle went national.

“Faintly but distinctly, the mesmeric boomlay-boom of publicity drums on Manhattan’s Madison Ave. is heard 980 miles away in Columbia (pop. 43,000), site of the University of Missouri,” Time Magazine wrote in 1958. “Stout-souled citizens wonder what is wrong. Chamber of Commerce members writhe to the beat and get the message. It is so nonsensical that at first it seems to be garbled: name the new boulevard (boom-lay boom) after Milton Caniff.”

The Columbia Chamber of Commerce, which had been on the fence, caved to Time’s satire, and formally supported naming the new road from U.S. 40 Highway to the MU Stadium for the artist.

It didn’t help. The City of Columbia refused.

Providence Road retains its name to this day.

Miss Mizzou Jumps From the Page to Reality

Caniff Blvd. or not, Miss Mizzou and her trench coat continued to attract the interest of the student body at Mizzou.

A 1996 Mizzou Magazine story noted that in October 1952 during halftime at the MU versus SMU football game, Bek Stiner, playing Miss Mizzou, introduced the character to MU by flirtatiously removing her trench coat, revealing a black and gold leopard costume. 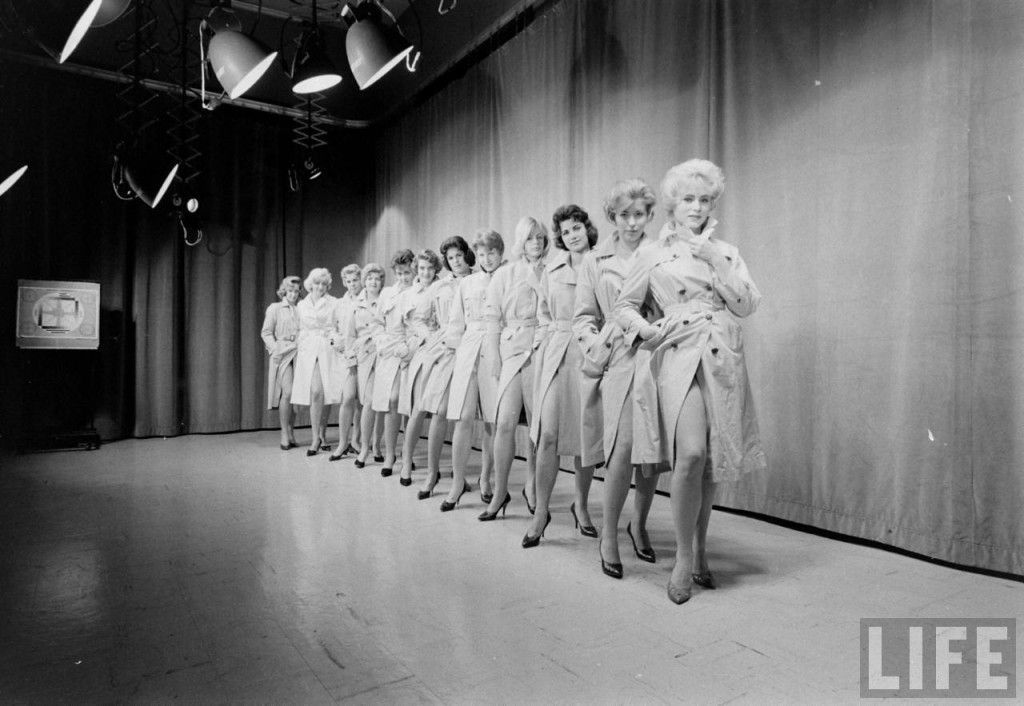 Miss Mizzou contestants line up on the Jesse Hall stage. Courtesy the Historical Archives of Time-Life.

Thirty-two young women competed. The 1961 Savitar reported the artist himself was one of the judges.

The trench-coated Miss Mizzou contest continued until 1971. At least one winner tried to parlay her fame into a movie career in Hollywood. A more modest contest was briefly revived in 1985, but without the Steve Canyon connection.

Miss Mizzou continued as one of Steve Canyon’s love interests in the comic strip, unchanged since her debut in the fifties. The Steve Canyon strip ended with Caniff’s death in 1988, and with him passed Miss Mizzou.