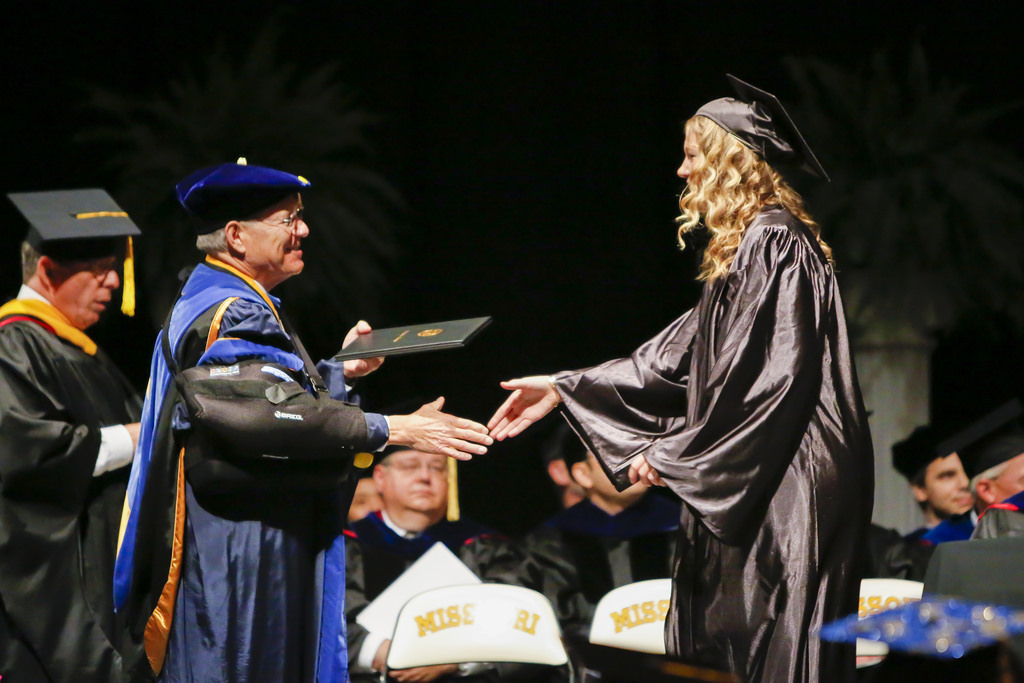 Vice Chancellor and CAFNR Dean Tom Payne hands out a diploma to a graduating student during CAFNR’s spring commencement ceremony on May 18.

Over the past weekend, the College of Agriculture, Food and Natural Resources and the School of Natural Resources celebrated the close of their students’ education at the University of Missouri. On the evening of May 17, the parents and loved ones of SNR students gathered in Jesse Auditorium to applaud more than 180 graduates — the largest SNR class yet — as they walked across the stage to receive their diplomas. The following morning, more than 400 CAFNR students received their diplomas to the cheers and ovation at the Hearnes Center. 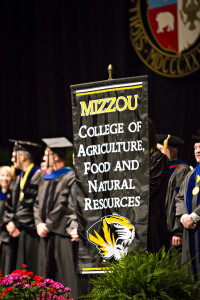 Associate Dean and Director of Academic Programs Bryan Garton welcomed the boisterous crowd on Sunday. He praised the students for their hard work and dedication in reaching this special day.

The students then enthusiastically welcomed to the stage Chancellor R. Bowen Loftin, famous on campus for his Mizzou spirit, bushy moustache and omnipresent bowtie.

“Believe in the four core values of this University: discovery, excellence, responsibility and respect,” Loftin said. “I also believe in a fifth core value, which is integrity. You will work with others someday whichever career you chose. Be someone who everyone wants to work with.”

Vice Chancellor and CAFNR Dean Tom Payne then livened up the crowd with a thundering MIZ-ZOU chant with Vice Provost and Animal Sciences Professor Jim Spain.

Payne went on to stress that the past few years for the students have been an investment. “Continue your investment in education and invest in yourself to be the greatest you can be,” he said. “Also, do nice things to others to make their day special.”

Garton returned to the stage to introduce the commencement’s guest speaker — U.S. Rep Vicky Hartzler. The congresswoman from Archie, Mo., talked about her family’s connection to farming through the generations and stressed how important the state’s agriculture is to the world.

“By the year 2050 we will need to feed 9 billion people and that will involve better technology, more efficient equipment and better crops,” Hartzler said. “And this graduating class will be a part of that. You will help feed the world.” 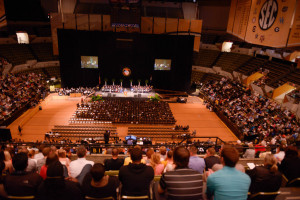 A packed crowd cheers for their graduates at the Hearnes Center.

To begin the SNR ceremony on Saturday, a former director of the school, Rose-Marie Muzika, introduced the 15 faculty members onstage representing the six academic areas of SNR.

Chancellor Loftin encouraged graduates to cherish this day of congratulation, to truly “enjoy it to the max.” He praised the graduates on their achievement and charged students with responsibility to continue the dedication and aspiration that has made the University so proud over the last four years.

“As you move forward, you are inheriting the Mizzou brand,” he said. “Your job is to make it greater.”

Michael Womack, SNR Student Council president and junior in fisheries and wildlife, addressed his peers with best wishes for their futures and warm memories from their shared experiences during the last few years.

The graduating class and their loved ones were then given advice and congratulations from Dean Payne. In his address, he spoke of the value of a good attitude, the unquantifiable results of a small act of kindness and the importance of being “present.”

Payne shared his three B’s: no bragging, no blaming and no bellyaching. He reminded the graduates that while classroom education is valuable and will take them far in life, it’s also critical to remember to be conscious of character and how actions and attitudes can affect relationships with those around us. He concluded with a series of questions he said are important to constantly be asking:

University of Missouri College of Agriculture, Food and Natural Resources May 2014 Commencement from Academic Support Center on Vimeo. 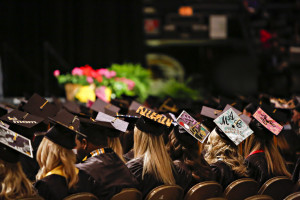 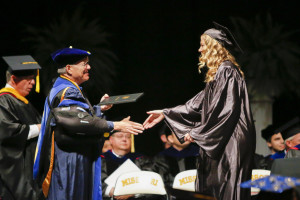 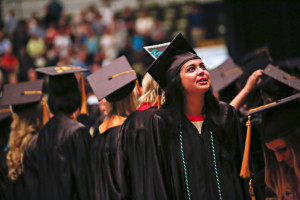 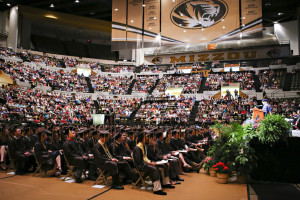 Former Director of the Missouri Department of Natural Resources Steve Mahfood delivered the commencement speech for the 2014 graduates. Mahfood  granted graduates a unique insight to natural resources management and the industry many of them are about to enter thanks to his experience as director of the Missouri Environmental Improvement and Energy Resources Authority from 1984 to 1998, MDNR director from 1998 to 2005 and principal at Mahfood Associates, an environmental services company in St. Louis. He received the United States Presidential Environmental Achievement Award in 1997 and is presently serving as advisor for the Nature Conservancy and other organizations on climate change, energy, environmental, natural resource and carbon management issues. 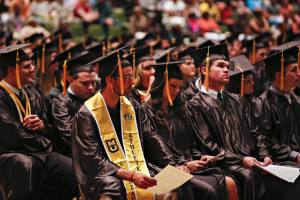 Mahfood began by addressing and contradicting the negativity of fellow baby boomers, asserting that, rather than vanity, this generation of young adults manifests the ideals of “acceptance and promotion of others.”

As he drew attention to how far the world has come in the last few decades, his speech was charged with illustrations of blooming technologies and an obligation to protect and enrich the world we come into. He quoted his uncle, the retired Yankee Yogi Berra, saying “the future just ain’t what it used to be.”

Mahfood concluded with a reminder to not only do things right, but to do the right things. With that, he said, this upcoming generation of leaders will create a bright future for those next to follow.

“They say if you’re not pessimistic about the future, you don’t understand the data. But I reject that. If you can see what I see, meet the people who are going to be in charge of the future, and not be optimistic — well then you had better check your pulse,” Mahfood said.

Mark Ryan, the director of the School of Natural Resources, was the last to speak to the graduates before they received their diplomas. His speech appealed to his audience’s affinity for a four-letter phrase that has been circulating the younger generations for the last year or so.

He then emphasized the use of our short time on this planet to make as big an impact as possible. He said that although in the grand scheme of things each life is but a blink of an eye, “it’s the eye that blinks. We have the power to use our short lives to have such lasting impact,” he said. “The quantity may be insignificant, but the quality is immeasurable.” 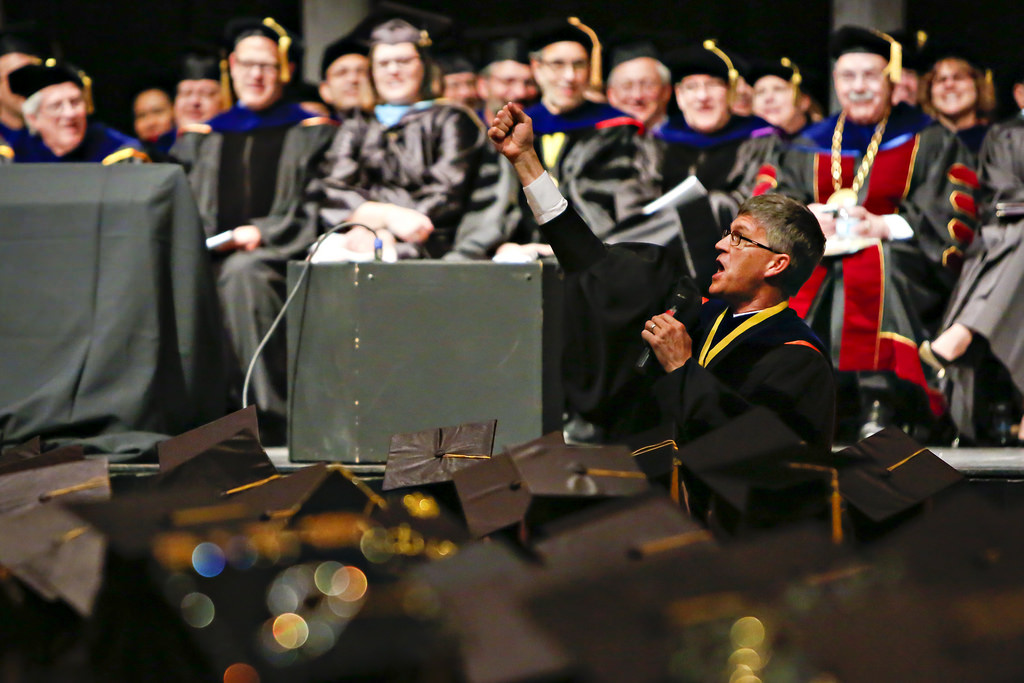