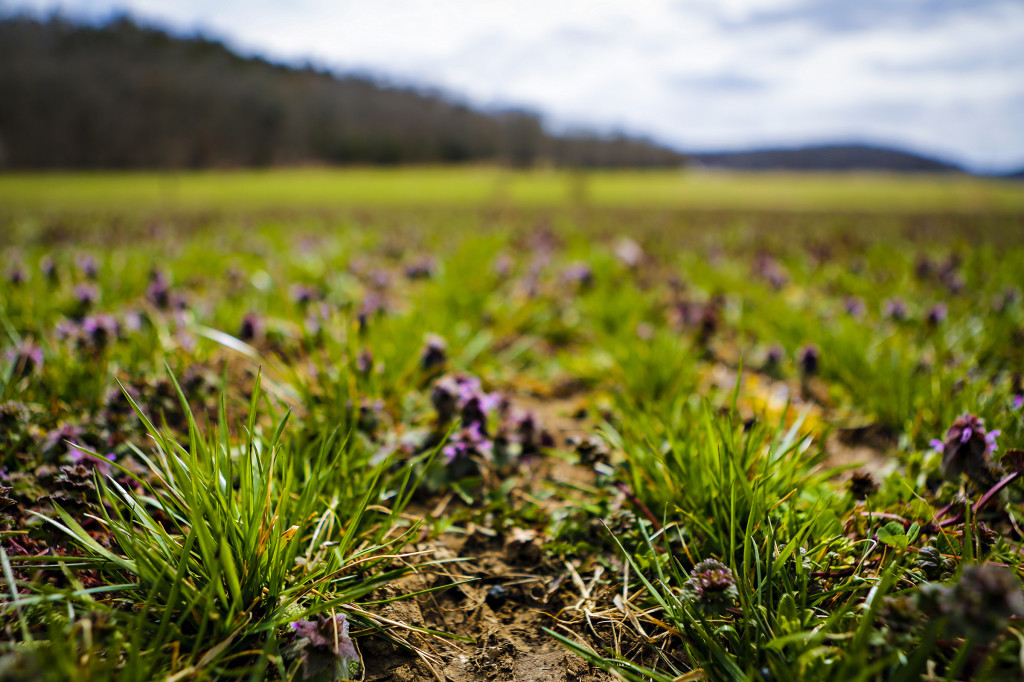 Darrel Franson has seen substantial success at his small livestock production in southwest Missouri. He can tell by the extensive records he has kept.

“I have kept data on every cow when it came in and when it went to market, every purchase of seed, how much I feed my livestock and every bit of money I have put into my farm,” said Franson of his farm near Mt. Vernon.

Franson credits his prosperity to one thing: the implementation of nontoxic novel endophyte fescue.

“Over the last decade and a half I have seen some great profits and added benefits,” added Franson. “This grass truly is the real deal.” 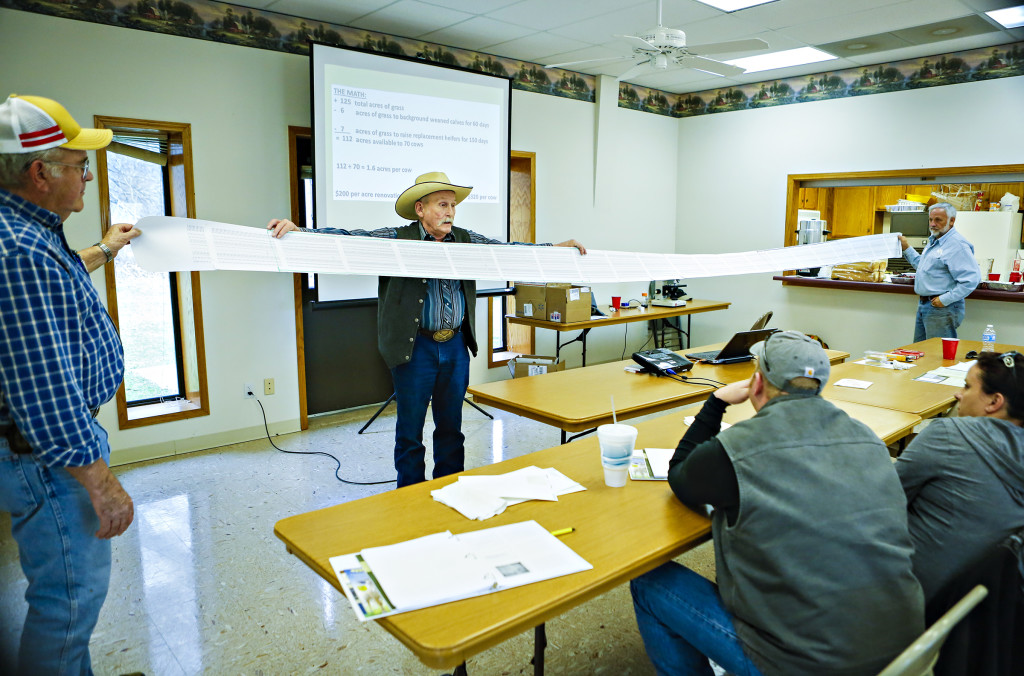 Franson shared his experiences at the Alliance for Grassland Renewal’s Educational School at Wurdack Research Center of converting his pastures from traditional toxic Kentucky 31 (K-31) tall fescue to the novel endophyte variety. The center near Cook Station was one of four research centers owner by the University of Missouri College of Agriculture, Food and Natural Resources that hosted the schools in April to inform livestock producers of the problems associated with K-31 and the benefits of converting pastures.

In 2000, Franson by chance discovered the novel endophyte fescue while buying seed for the coming year. It was something new on the shelf and he decided to try it. The next year he worked on 10 acres to kill off the K-31 and convert to the new grass.

After seeing healthier cattle, Franson decided to convert more acreage the coming years, with each year only working with 10 to 20 acres at a time. By 2009 he had killed off the last of K-31 fields on his land. By September of this year he looks to have all novel endophyte fescue at his 125-acre Shiloh Land & Cattle Co. farm.

“This grass really helped reduce the amount of problems I saw with my cattle,” said Franon, referring to the fescue toxicosis associated with K-31.

K-31 became popular with farmers in the mid- to late-1940s and 1950 and spread quickly throughout the Midwest and southern United States. It now accounts for more than 40 million acres of pasture and forage land.

In Missouri alone, tall fescue covers around 17 million acres and most of that tall fescue is infected with a fungal endophyte that is toxic to animals and causes a variety of problems such as weight loss, fescue foot, have higher internal body temperatures and respiration rates, retain a rough hair coat and have poor reproductive performance.

“We can spot a cow from a distance that has these fescue toxicosis problems,” said Craig Roberts, MU professor of plant sciences. “A lot of the problems are amplified in the summer when the cattle cannot cool themselves down due to poor thermoregulation. The then develop heat stress and potentially die.”

Research has proven that infected cattle will produce 35 percent less milk and gain up to about half of the pounds needed per day to make a financially strong sale.

“In Missouri we saw infected steers gain less than a pound a day, where as the non-toxic fescue fed steers gained about 1.4 pounds per day,” added Roberts. 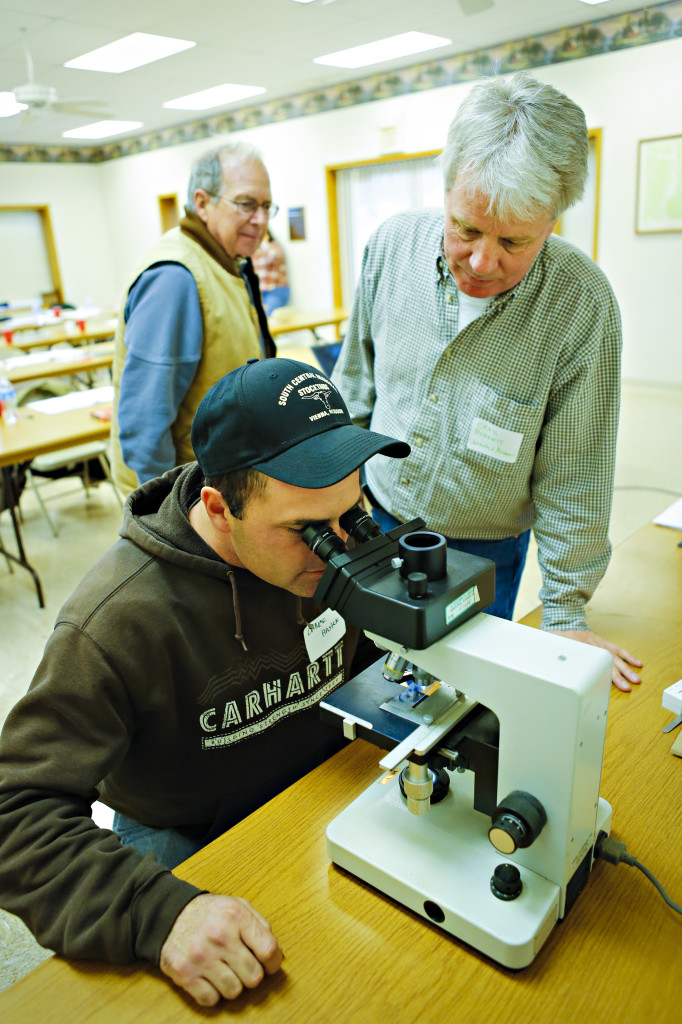 Craig Roberts, professor of plant sciences, has workshop attendees look through a microscope to see the novel endophytes up close.

“I spent about $200 per acre to convert a 16-acre pasture last September,” said Franson. “But I believe, based on my last decade of data, that I can get my money back in less than two years thanks to the higher quality beef I am taking to market and the less input dollars on cattle and fields I spent in the past.”

MU Extension Agronomy Specialist Will McClain stressed that before converting pastures begin, the producer must think about their plans. There are several different ways to kill of the K-31 such as chemical sprays and burns. A common system involves a chemical spray, a burning of the field and then plant.

“The best time to plant the new fescue would in the fall, typically no later than October 1 in southern Missouri and by September 10 in northern Missouri,” said McClain. “As spring growth begins, really work on controlling the weed competition to get those seedlings better established.”

Once the livestock reach market that is when the producers reap the benefits.

“I saw an increase of $190.80 in sales per cow and am in the top 5 percent of marbling with the meat,” said Franson. “People want this high-quality product and are willing to pay for it. Take advantage of that.”

The Alliance for Grassland Reneweal is made of partners from MU, government officials, seed companies and testing labs, producers and nonprofit groups. They work to spread word about the non-toxic fescue and the problems associated with fescue toxicosis. For more information about the Alliance, visit http://grasslandrenewal.org/.

Press-quality photos from the Educational School can be downloaded from CAFNR’s Flickr Page at http://bit.ly/1lFf8MA.

Wurdack Research Center is nestled along the Meramec River in the northeast Ozarks. The center conducts demonstartions and research in integrated livestock, forages, forestry, agroforestry and wildlife management practices that are economically viable, environmentally sound and sociologically acceptable for the region. Timber covers most of the acreage, while 260 acres provide the base for forage production, rotational grazing and cattle production. 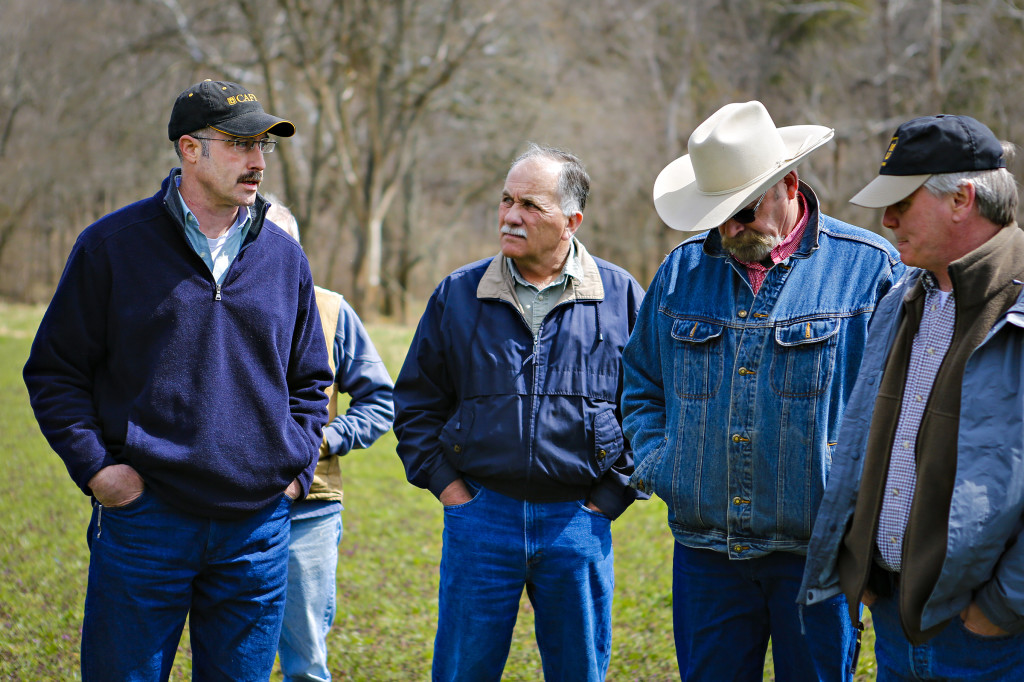