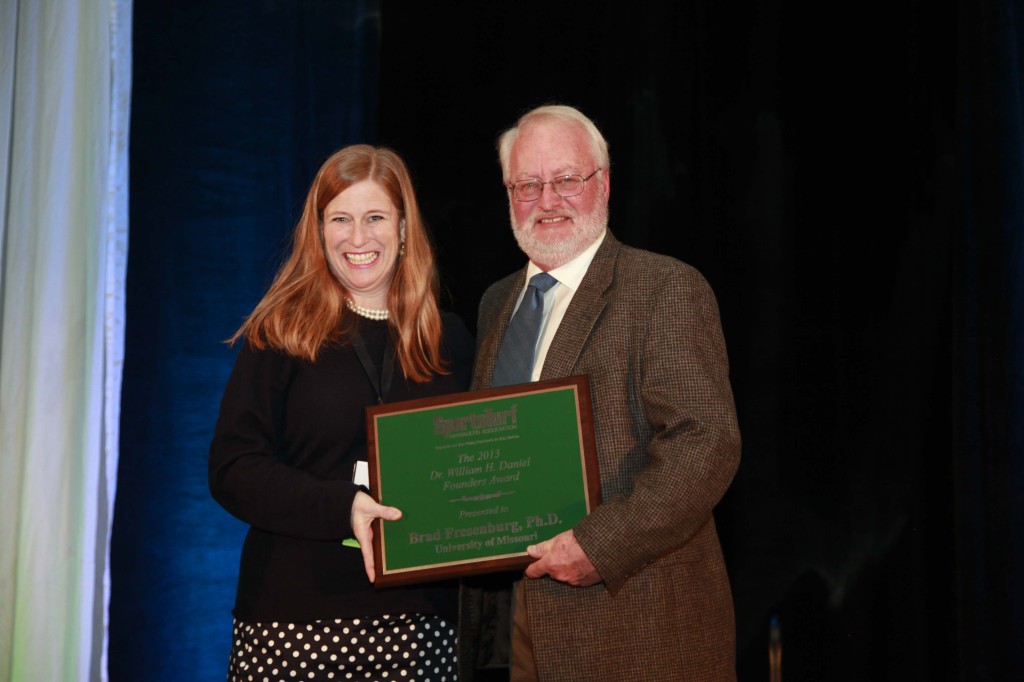 The Sports Turf Manager Association’s (STMA) highest honors, the four Founders Awards, recognize those individuals who have made significant contributions to STMA and to the profession. These awards are presented annually at the Sports Turf Manager Conference and Awards Banquet. This year’s banquet was held in San Antonio, Texas, on Jan. 24. The four Founder awards include: The Dick Ericson Award, The George Toma “Golden Rake” Award, The Dr. William H. Daniel Award and The Harry C. Gill Award.

In April of 1987, Fresenburg began working as a Research Specialist for John Dunn and Dave Minner in Turfgrass Research at South Farms while working on his MBA. After graduation, he remained in the program and became a Research Associate, taking on more teaching and extension duties over time.  Eventually, Fresenburg went back to school again for his Ph.D., and is now an Assistant Extension Professor in Turfgrass Sciences at MU and serves as the State Turfgrass Specialist.

Fresenburg teaches undergraduate classes at MU, specifically Introductory Turfgrass Management and Horticultural Drainage & Irrigation Systems.  He specializes in Athletic Field design and maintenance.   Some of his Extension work includes programs like the National Turfgrass Evaluation Program trials, Master Gardener Training and Pesticide Applicator Training. He has been with the University of Missouri for more than 26 years.

“My involvement with sports turf began here at Mizzou in 1992 when Dr. Dave Minner and I became involved with the renovation of Simmons Field – Home of Mizzou Baseball,” Fresenburg said. “From that point on, I continued to be involved with Mizzou Athletics and developed a passion for sports turf management.  I continue to be involved in sports turf management programs around the state of Missouri through Extension programs.  Another high point of my career was being an honorary member of the 2012 All-Star game in Kansas City.”

William H. Daniel was not only one of the Founders of STMA and one of its supporters, but he also set the pattern for educator/researcher involvement in the Association. The partnership between the educators and researchers in this industry and the sports turf managers who incorporate the knowledge, training and research advances in practical, on-the-field applications is key to the progress that has been made, and continues to be made, in providing better and safer sports turf areas.

To honor all that he achieved, the Dr. William H. Daniel Award recognizes an individual who has made significant contributions to the sports turf industry through his or her research, teaching or Extension outreach.