Whether they sank in epic fashion or crossed the finish line in record time, the result was the same – thousands of meals raised for The Food Bank for Central and Northeast Missouri. 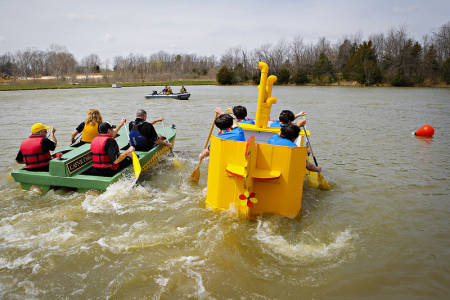 More than $21,500 was brought in by the crews of 50 cardboard boats during the third annual Float Your Boat for the Food Bank race held Saturday at the Bass Pro Shops Lake in northeast Columbia.

The homemade cardboard boats – with themes ranging from the Beatles’ Yellow Submarine, a floating hotdog and a riverboat, complete with paddlewheel – were constructed by student groups, community organizations, businesses, individuals and families. 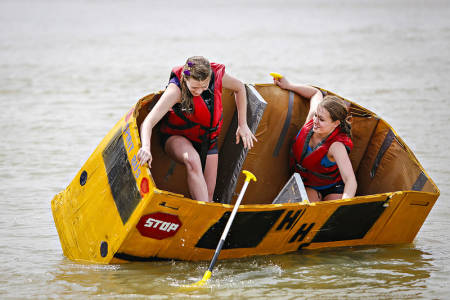 Boats are made out of cardboard, duct tape, glue and the imagination of their builders. Attendees came early to see the cardboard racers in their pit areas – many teams carry their boat theme through, with costumes, music and activities – and vote on their favorites through donations to The Food Bank.

The boat with the most donations receives the People’s Choice Award. Funds for The Food Bank are also raised through event sponsorships, boat registrations and food concessions.

“Each dollar raised equals 12 meals or 15 pounds of food on tables in the 32 counties served by The Food Bank,” said Todd Pridemore, development manager at The Food Bank. “The $21,515 raised this year will allow us to provide more than 250,000 meals.” 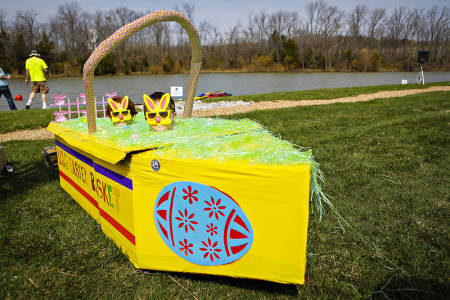 The USS Easter Baskett was piloted by Katy Purcell, 9, and Ty Eversole, 9.

This year a majority of the boats finished the course in spite of sometimes gusty winds. Boats must have at least two people to paddle, but some had as many as eight.

The boat that received the greatest number of donations – winning the People’s Choice Award — was the Dragonfly, captained by Dan Obrecht and Tony Thorpe, senior research specialists in fisheries and wildlife at the MU School of Natural Resources. Their team raised $2,514. Last year, the team’s Crawdaddy brought in $2,260 in donations, also snagging the People’s Choice Award.

The Titanic Award for Best Sinking was presented to the Sponge-Bob-themed Barnacles and Tartar Sauce team. The I Can’t Believe it is Cardboard Award was given to Lenoir Woods, whose boat, Life is a Dream at Lenoir, looked like a bed. Best Use of a Theme was presented to the Popeye-inspired Olive, crewed by a team from MU’s Bond Life Sciences Center. The Ugliest Boat Award was earned by the U.S.S. Water Temple. Best in Show was presented to the CAFNR Corn Stalker, made by representatives of the College of Agriculture, Food and Natural Resources. The Bass Pro Award went to the Big Muddy Raft team. 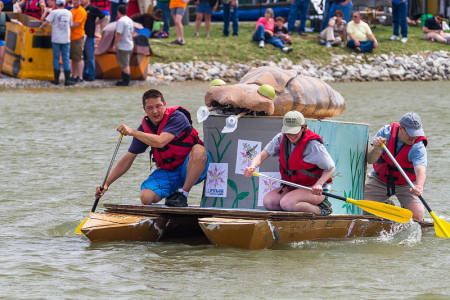 Finishing first in time in the Long Course was the Hope it Floats boat, a father and son team who had the third-best time last year. The winners of the inaugural Short Course (for children 8-14 years old) was Monkey Business.

“The majority of people receiving food are poor working families, the elderly and children,” said Tom Payne, MU vice chancellor and MU College of Agriculture, Food and Natural Resources dean, who worked to bring a cardboard boat regatta to mid-Missouri. “One in five children in our region face food insecurity on a regular basis.” CAFNR is the Presenting Sponsor of the race.

The Food Bank helps to feed more than 114,000 people each month in 32 counties in central and northeast Missouri, said Executive Director Peggy Kirkpatrick. It distributes free food to 138 elementary schools through the Buddy Pack Program, a weekend food service for children; and to 135 hunger-relief agencies, such as food pantries, soup kitchens and shelters.