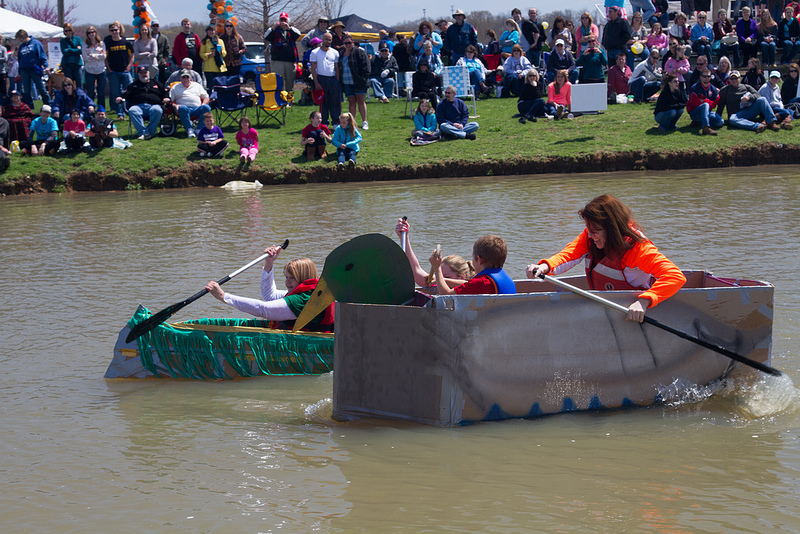 Fifty-two cardboard boats – with themes ranging from Popeye’s ship, a floating corn field catamaran and a replica space shuttle – are scheduled to compete in the third annual Float Your Boat for the Food Bank race April 12 at the Bass Pro Shops Lake in northeast Columbia.

The event is a fundraiser for The Food Bank for Central and Northeast Missouri. More than $17,000 in sponsorships and donations were collected last year when 46 boats competed.

Vessels are constructed by student groups, community organizations, businesses, individuals and families.  Boats are made out of cardboard, duct tape, glue and the imagination of their builders. Last year’s boats included a race car, Viking war boat, Titanic replica, pirate ship and a canoe with a puppy dog face.

Vessels scheduled to compete this year include a dragonfly, a rocket ship from Korea, a tiger-squirrel and a bright yellow corncob. 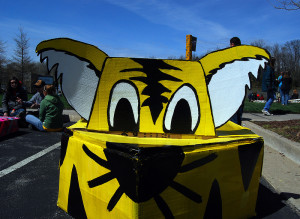 Fun for a Cause

“The majority of people receiving food are poor working families, the elderly and children,” said Tom Payne, MU vice chancellor and MU College of Agriculture, Food and Natural Resources dean, who came up with the idea for the race. “One in five children in our region face food insecurity on a regular basis.” CAFNR co-sponsors the race.

Awards will be presented in categories including the Ugliest Boat, Can’t Believe It’s Cardboard Award, the Titanic Award for the Best Sinking and the Bass Pro Shops Award.

Boat judging begins at 11 a.m. on Saturday. Races start at noon. This year children’s games will begin at 10 a.m. and there will be a mass flotilla of surviving boats after the ending awards ceremony.

Some Know Success, Some Sink

Last year about half of the boats successfully made the one to two minute voyage across the lake. Boats must have at least two people to paddle, but some have had as many as eight.

The 2013 People’s Choice Award, chosen by the amount of donations to an individual boat, was presented to The Crawdaddy, captained by Tony Thorpe, senior research specialist in fisheries and wildlife at the MU School of Natural Resources. His team raised $2,260. The boat, which featured the large pincers and head of a crawdad, also was given the Best Theme prize. It capsized at the beginning of its race. 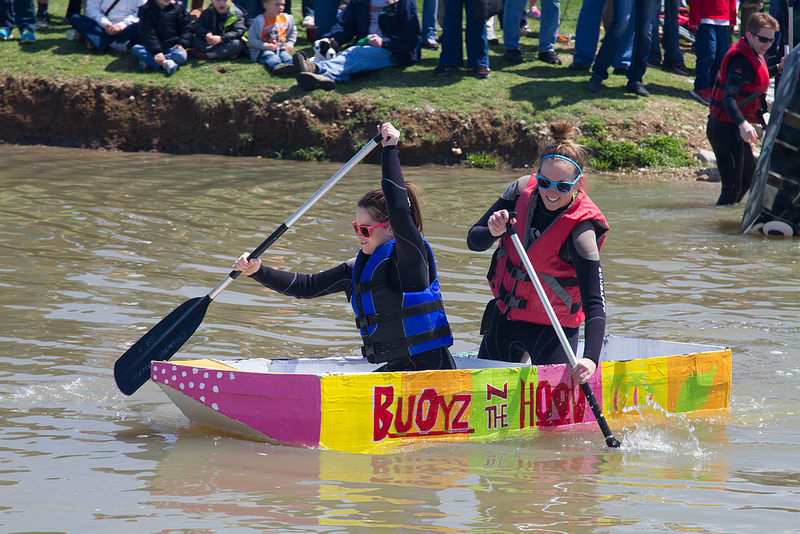 “There is no reason people should be hungry,” Thorpe said. “Not in this country and not in Missouri. With the Float Your Boat race, we have the opportunity to have fun and feed people. We’re helping people right here in our part of Missouri. With the money raised by this event last year, The Food Bank was able to provide almost 200,000 meals to the children, the working poor and the elderly of Missouri. Not bad for a bunch of goofballs in cardboard boats.”

The Food Bank helps to feed more than 114,000 people each month in 32 counties in central and northeast Missouri, said Executive Director Peggy Kirkpatrick. It distributes free food to 138 elementary schools through the Buddy Pack Program, a weekend food service for children; and to 135 hunger-relief agencies, such as food pantries, soup kitchens and shelters.

“Taking part in Float Your Boat is a blast,” Thorpe continued. “I enjoy hanging out with friends while building our boat. We collaborate on the engineering – if you can call it engineering – and the visual design, usually with plenty of snacks and beverages on hand. Race day is just the icing on the cake. It’s the big party that wraps up ‘boat season.’ I don’t even mind that our boat sank last year. But, man, that water was cold.”