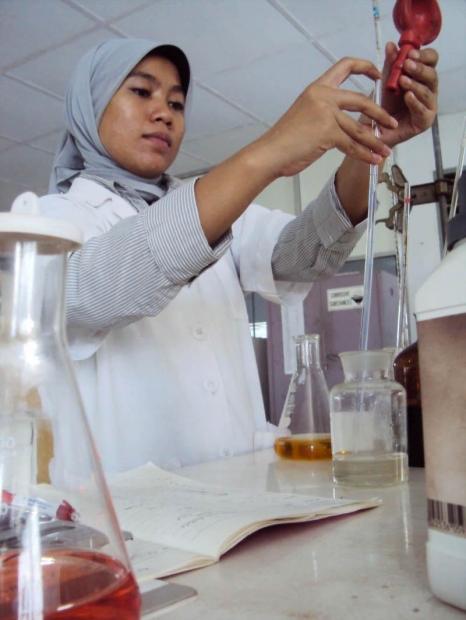 Incoming science majors tend to have a one-track mind: “They all want to go to med school,” said Tao Wei, a junior MU Biochemistry major.

But Assistant Teaching Professor Chris Lee is trying to prove to his students that a biochemistry degree doesn’t mean you have only one direction upon graduation.

“Medicine is one of many things you can do with a biochemistry degree,” he said. “It’s a disservice to our students to not at least introduce them to other options that they can pursue with their degree.”

Among these options includes a career in industry, and Lee is incorporating this outlook in a new biochemistry course for undergraduates. Internship in Biochemistry teaches students about the benefits of an industry career and how to properly work in a laboratory setting, all while giving them real-world experience.

Three juniors, including Wei, and one senior were selected from an application pool narrowed down by the Biochemistry undergraduate faculty. The final four were then officially chosen by ABC Laboratories, the company that will employ the students for a summer internship.

ABC Laboratories, located in Columbia, is a contract research organization that does product development and analytical testing services for the pharmaceutical, biotech, animal health, crop protection, consumer products and chemical industries. Because work performed by ABC is subject to FDA, EPA and other regulations, the typical new employee of ABC receives three to six months of training before they can independently perform work in the lab. Therefore, Lee set out to develop a semester-long curriculum to prepare the undergraduates.

“We provided a platform for ABC to help get the training done during the course of the semester while giving some technical training,” Lee said.

Beginning in January, the interns attended two lectures a week for the first eight weeks of the spring semester. Lee conducted these sessions, and employees from ABC Laboratories visited the class each week to discuss their work and different training modules.

“The most exciting part of the lectures is knowing that every day I’ll walk in and acquire some of their knowledge about their industry and what to expect,” said Matthew Mosior, a junior Biochemistry major participating in the internship.

Four weeks into the process, the interns of this five-credit class started spending their afternoons at the Charles W. Gehrke Proteomics Center with Biochemistry Assistant Research Professor Brian Mooney (Gehrke also co-founded ABC Laboratories in 1968). The afternoon lab meetings put the interns to work as they learned how to collect data, analyze samples, calculate molarities and use the Proteomics Center’s complicated machinery, including mass spectrometry and HPLC (high-performance liquid chromatography).

“I was impressed by the students, both with their background knowledge and also with their ability to pick up techniques we use,” said Mooney, whose NSF grant helped fund the intern projects. 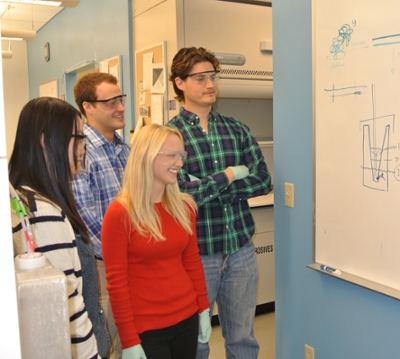 Mooney’s research focuses on hybrid corn and different amounts of heterosis, or hybrid vigor. Mooney incorporated experiments that allowed each student to work on a single type of plant and replicate experiments. This research will hopefully show protein differences associated with a particular phenotype, which causes more successful corn growth. Then, farmers will be able to produce better-performing corn. Any papers that develop from this work will make the interns published authors.

“They’re getting training on a level that undergraduate students rarely receive,” Lee said. “At the end of their training module semester, they will be trained as operators of different instrumentation that most of the biotech industry utilizes.”

After five weeks with Mooney and at the Proteomics Center, the four interns will receive more training with the scientists at ABC Laboratories until the summer. Then, they will become 40-hour/week paid interns for the company. At the end of the summer, the students will have to present a poster to all of the employees on everything they learned through this eight-month process.

“It’s been such a good experience for me before even being at ABC,” Mosior said in anticipation of the third phase, which started at the end of March. “It’s been one of the harder courses I’ve taken but by far one of the most rewarding because of the amount of lab work I got in.” Through the internship program, Mosior realized what a valued experience working in industry can be. He plans on pursuing this plan for a year or two after graduation before he applies to a biochemistry graduate program.

The program will hopefully move forward because of Lee, who already includes industry into his senior lab class and who also wants to do anything possible to provide undergraduates with “the skill set that industries look for to make attractive hires right out of college.”

Although this spring has been a pilot semester, the internship course appears to be a mainstay in the undergraduate curriculum.