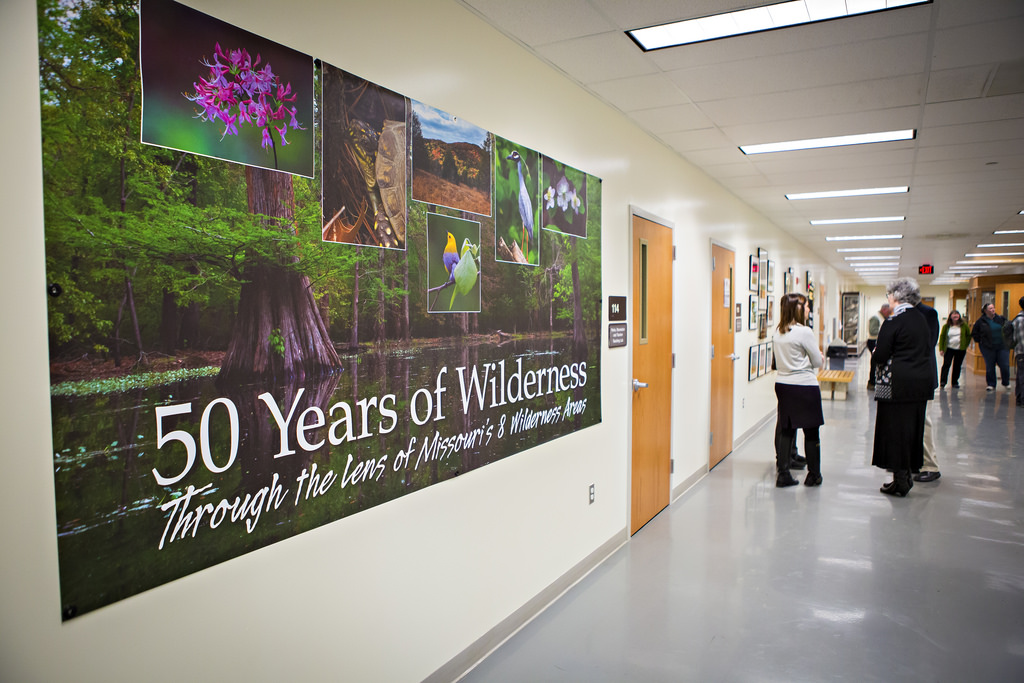 Western states such as Alaska and Montana often have the allure to visitors as a place unexplored or never disturbed by man. But in Missouri there is plenty of backcountry areas left to explore in the state’s eight wilderness areas. These areas are located throughout southern Missouri and were created in the 1980s as part of the Wilderness Act of 1964.

Across the country, numerous commemorations and events are scheduled to celebrate the 50th anniversary of the act. In the Show-Me-State, a couple’s photography exhibit is showcasing Missouri’s wilderness areas.

The exhibit by the husband and wife team of Richard Spener and Toni Armstrong, “50 Years of Wilderness: Through the Lens of Missouri’s 8 Wilderness Areas,” will be at the University of Missouri till April 23. The photo exhibit is located inside the first floor hallway of the Anheuser-Busch Natural Resources building, on the MU campus, near the corner of Hitt and Rollins streets.

“This is part of a two-year project in which we traveled to Missouri’s wilderness areas to share with people the beauty that they have in this state,” said Spener, a 1961 MU graduate with a degree in business and hospitality management who now lives in St. Louis. “It’s a great chance for people to come out and see what Missouri has to offer because many of these areas most people don’t even know about.” 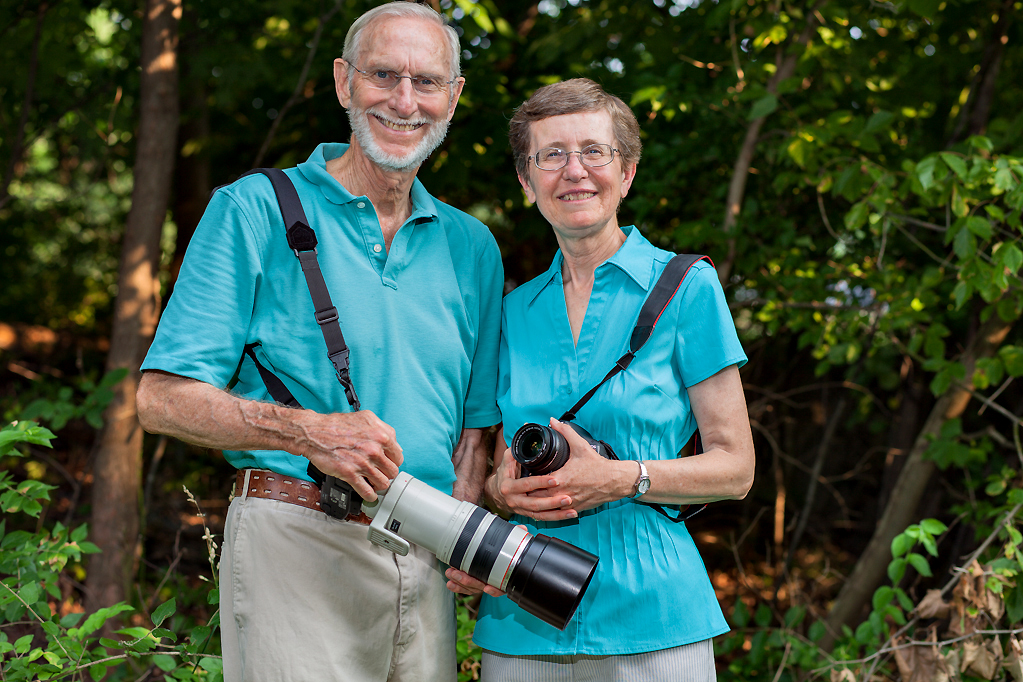 Throughout the project, Spener and Armstrong challenged themselves to photograph the uniqueness of each wilderness area. They captured the majesty of the old-growth bald cypresses at Mingo Wilderness Area in the Bootheel and the geologic formations at Piney Creek Wilderness Area, west of Branson. On display are the wildflowers and distinctive habitats of Hercules Glades and Rock Pile Mountain wilderness Areas, as well as the clear springs and streams from the Irish and Devils Backbone wilderness areas. They also shared images of the dramatic vistas from Bell Mountain and Paddy Creek wilderness areas.

“The Wilderness Act has had a huge impact on conservation, but many of our students know little about its history or impact,” said Mark Ryan, director of the
School of Natural Resources. “What a great way to capture interest and educate!”

“We wanted to not only share the beauty of a valuable resource our state, but to expose people who do not know about the areas so that we can protect them and other lands in the future,” said Spener. “It’s been so rewarding to get out and see these places at all times of the year, in all kinds of weather. I just want people to know how much of a gift it is to have these lands and how important it is we foster these for future generations.”

Ryan added that the importance of the wilderness areas stretches beyond just a place to hike, camp or visit. “With Climate Change, protection of wild areas and the species protected within them can be threatened. There also will be a need for new wilderness areas to protect our natural heritage. I hope people see that citizen activists and professional conservationists can have huge, lasting impacts.”

After MU’s visit, the exhibit will travel to the Anita B. Gorman Discovery Center in Kansas City from May to June, the U.S. Forest Service from July to October, Kirksville in September and the Discovery Center in Springfield from November to December.

For more of Richard Spener’s work, visit http://richardspenerphotography.com/. Spener also was a member and past president of the MU Hospitality Management advisory board for nearly two decades. He is a nature and wildlife photographer. His images have been published by the St. Louis Post Dispatch, National Wildlife Federation and Audubon Society of Missouri. Spener is a regular contributor of photos to the online and print newsletter of the Alaska Wilderness League.

Press-quality photos from the exhibit’s opening can be found at http://bit.ly/1goQNGk. For a photo of Spener and Armstrong, visit https://db.tt/7Nl0l8Hk.

Get a sneak peak of the exhibit here. 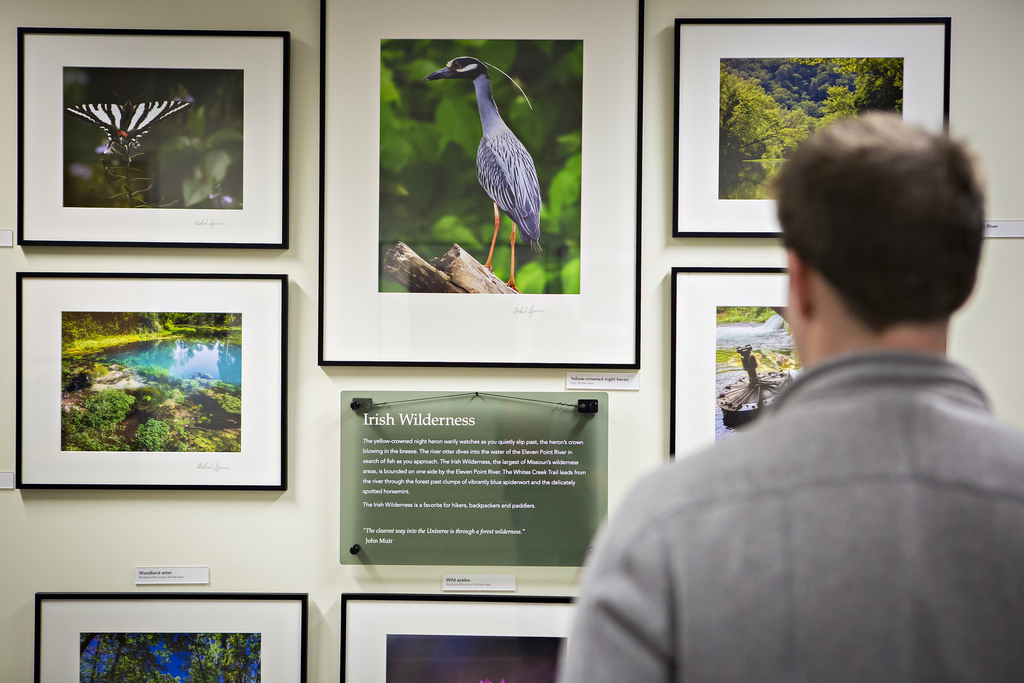 A glimpse at the Irish Wilderness Area display.