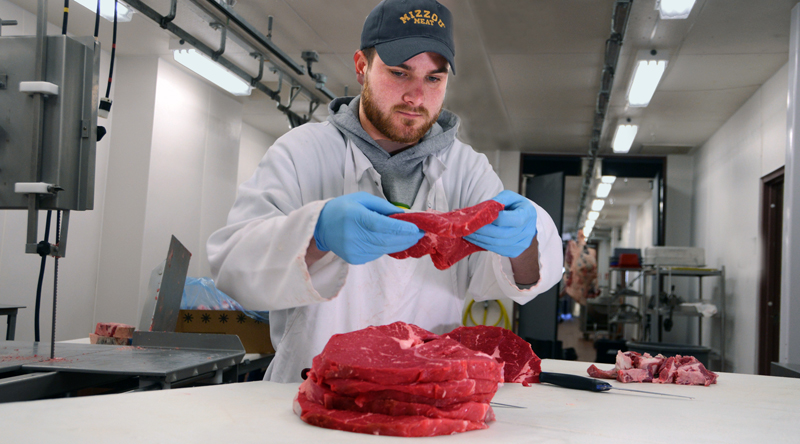 Jon Black, a senior in ag business management at MU, stacks freshly cut steaks to be packaged at the Mizzou Meat Market.

Removing value-added cuts of beef from the chuck increases profits for producers while offering consumers lower-cost, high-quality steaks.  Does removing those cuts affect the quality of meat left over, the ground chuck?

Claire Ohman, a meat science graduate research assistant at the University of Missouri, looked at the overall color and odor stability of ground chuck when value cuts like the flat iron and Denver cut were removed.

“We processed 24 beef steers over five months, isolating the left and right chucks,” Ohman says. Value cuts were removed from each animal’s left chuck while the right chucks were processed in a traditional style. The two blends of ground chuck were made into patties and then analyzed for color stability and odor.

“When consumers go to the retail case to purchase meat, the biggest factor in their decision is the color of the meat,” says Carol Lorenzen, professor of Animal Sciences in MU’s College of Agriculture, Food and Natural Resources. “So this project looked at not only changes in overall color but also changes in the percent of discoloration over a seven-day storage period.”

The History of Value Cuts

In the late 1990s, the price of beef cuts from the chuck and round dropped 20 to 30 percent, according to USDA data. The Beef Promotion and Operating Committee authorized the use of checkoff funds for a project to find ways to maximize the value of beef for America’s farmers and cattle ranchers.

The profiling project looked at properties that affect processing conditions and consumer acceptability. They characterized 39 primary muscles in the chuck and round and used new cutting techniques to create cuts that would fall between premium steaks and ground beef in price and value.

So far, value cuts from the chuck roll, shoulder clod and the round introduced to the market include:

The flat iron, petite tender and ranch steak are available in more than 20,000 restaurants and are making significant inroads in the retail market as well. 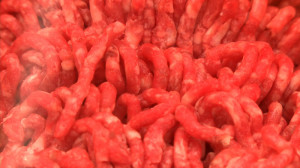 CAFNR researchers found no differences in the color or odor profiles of ground chuck with and without the value cuts.

“This shows that we are maintaining quality ground chuck while improving consumer choice,” Ohman says. “Consumers are able to purchase these new cuts at a lower price per pound than many of the steaks and roasts that have historically been on the market.”

Funding for this research was provided by the beef checkoff program through the National Cattlemen’s Beef Association.