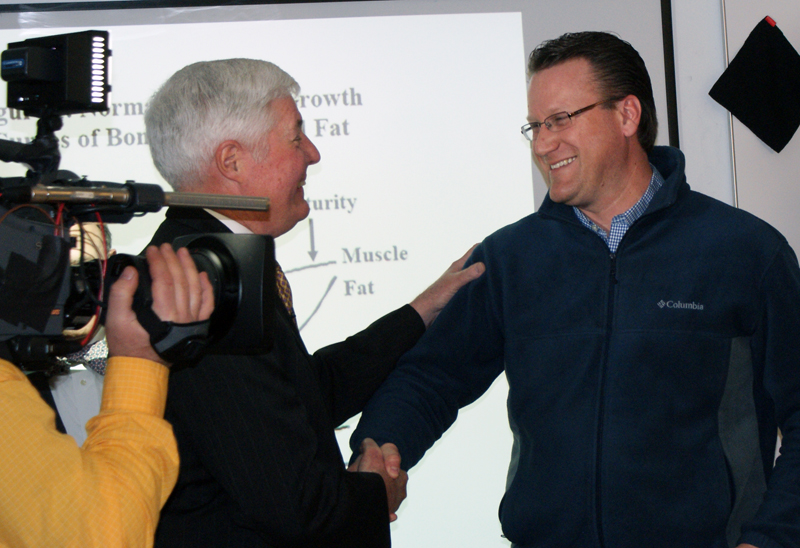 Bryon Wiegand, associate professor of Animal Sciences at CAFNR, was one of five University of Missouri educators honored with a William T. Kemper Fellowship for Teaching Excellence, one of the University’s most prestigious awards.

He is the 25th CAFNR teacher so honored since the Kemper awards were begun in 1991. 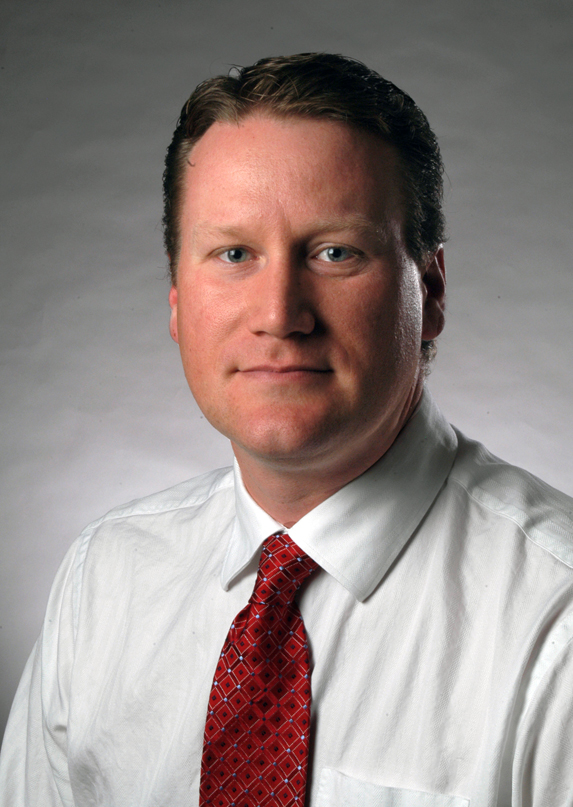 Wiegand was surprised in his classroom March 31 by the MU chancellor and executives from Commerce Bank, the trustee for the Kemper Foundation.

Wiegand earned his Bachelor of Science degree in Animal Science from MU in 1995 and his Ph.D. in 2000 from Iowa State. He joined MU’s Division of Animal Science in 2007 with a 60 percent research, 40 percent teaching appointment. His teaching courses include the Physiology and Biochemistry of Muscle, Animal Breeding, and Livestock Health and Disease.

Accolades from the Classroom

“Dr. Wiegand’s excellence in teaching is obvious to anyone who attends his lectures, and his quality of research is depicted in the impressive number of papers that he has authored. It is his friendship and advising, however, that set him apart from most other exceptional educators,” said Claire Ohman, a graduate student and advisee of Wiegand. “I am constantly impressed with his ability to establish rapport with students. He has been a valued friend, adviser and teacher, and he does everything within his power to help us succeed.”

A core part of Wiegand’s teaching philosophy revolves around incorporating multiple instruction techniques to encourage critical thinking in students with diverse learning styles. He established the meat science research program at MU, as well as a summer study abroad course for undergraduates interested in food science. He also was instrumental in developing the meat judging website JudgingPro, a multimedia tool that enhances livestock judging and simplifies training processes for agriculture teachers and students across the country.

“He makes the learning environment fun and rewarding, and I always look forward to going to class when he is teaching,” said Maggie Shane, an undergraduate student and advisee of Wiegand. “Dr. Wiegand encourages and supports each of his many students while challenging us to think critically about what we are doing and how class material relates to the real world.”

In addition to teaching and mentoring a number of students, Wiegand is the co-adviser for the Block and Bridle club and the supervisor of the MU meat judging team.. He also has served on many committees and organizational boards throughout his career, and currently is an associate editor for the Journal of Natural Resources and Life Science Education.

“Dr. Wiegand has utilized his teaching approach to give students the confidence to engage in defending and supporting their decisions,” said Rodney Geisert, a professor in the MU Division of Animal Sciences. “This is one of the purest forms of active learning, which takes a tremendous amount of time and dedication as a teacher. Few faculty members with dual research-teaching appointments take time to actively participate in the true scholarship of teaching and learning. One of Dr. Wiegand’s best qualities as a teacher is his willingness to take the time necessary to ensure that each student receives his personal attention.”

Wiegand was named the American Society of Animal Science’s Outstanding Young Teacher in 2009. In 2006, Illinois State University honored him as their Outstanding Team Researcher. The North American College & Teachers of Agriculture Association presented Wiegand with a Meritorious Teaching Award in 2004.

In 2012, Wiegand had his class interrupted by Vice Chancellor and CAFNR Dean Tom Payne to be presented a CAFNR Golden Apple Teaching Award.

The William T. Kemper Fellowships for Teaching Excellence were created in 1991 with a $500,000 gift to honor outstanding MU teachers. Commerce Bank manages the trust fund.

Kemper, a 1926 graduate of MU, was a well-known civic leader in Kansas City until his death in 1989. His 52-year career in banking included top positions in banks in Missouri, Kansas and Oklahoma.  Kemper Fellows are presented $10,000 to spend as they wish.