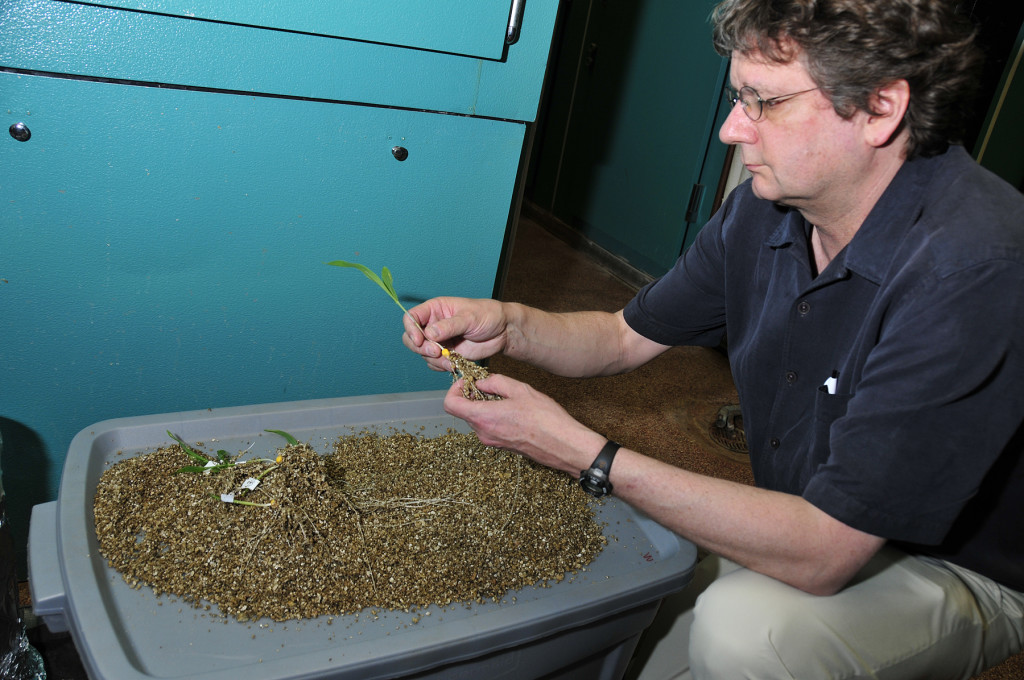 Robert “Bob” Sharp, professor of plant sciences at MU and director of IPG.

Robert “Bob” Sharp, professor of plant sciences at MU and director of IPG, was named a Fellow of the ASPB and Professor of Biochemistry Tom Guilfoyle will receive the ASPB’s 2014 Lawrence Bogorad Award for Excellence in Plant Biology Research. Guilfoyle’s award is one of the most prestigious in plant biology. It is made biennially “to a plant scientist whose work both illuminates the present and suggests paths to enlighten the future.”

ASPB is a professional society devoted to the advancement of the plant sciences. It was founded in 1924 as the American Society of Plant Physiologists and renamed in 2001. It publishes The Plant Cell and Plant Physiology, two of the top journals in the field of plant biology, and organizes conferences and other activities that are key to the advancement of the science.

“It’s an honor to be recognized by my main professional society in the country,” said Sharp. “Its not just about my long-term research with root biology and drought, but my contributions to ASPB since I became a member in 1981.”

The Association of American Universities (AAU) considers the two awards given to Sharp and Guilfoyle as “prestigious awards” that help bolster a university’s standings. In addition, the IPG has 19 Fellows of the American Association for the Advancement of Science (AAAS), which AAU also considers a prestigious honor.

Sharp earned his Ph.D from Lancaster University in the United Kingdom. His research focuses on the regulation of root and shoot growth responses to drought, using maize and soybean as model systems. In particular, he is interested in the roles and mechanism of action of abscisic acid and other hormones, and in the regulation of cell wall yielding properties. He is also a Fellow of the AAAS.

Guilfoyle earned his Ph.D. in Biology from the University of Illinois at Urbana-Champaign. He is a Fellow of both the AAAS and the ASPB. 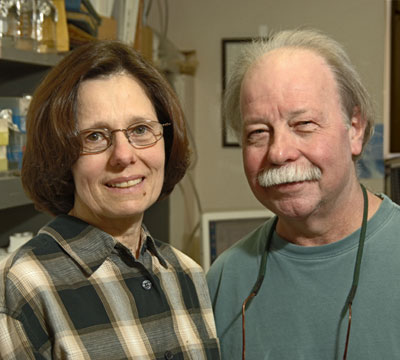 “Tom is being honored for his laboratory’s fundamental contributions to our understanding of auxin-regulated transcription,” said Gerald Hazelbauer, Curators’ Professor and director of the Division of Biochemistry at MU. “Auxin was the first plant hormone to be described, and it is now understood to be involved in regulating nearly every aspect of plant growth and development. Early studies focused on its chemical characterization and its myriad physiological roles. Dr. Guilfoyle’s work, often done jointly in collaboration with Research Professor of Biochemistry Gretchen Hagen, has been central to moving our understanding of auxin to the molecular level.”

The Lawrence Bogorad Award for Excellence in Plant Biology Research was established in 2005 to honor Bogorad’s contributions to plant biology, including his influential efforts to bring the techniques of molecular biology to bear on problems in plant biology; his groundbreaking research on chloroplast genetics, biogenesis, structure, and function; and his teaching and mentoring.

Established in 2007, the Fellow of ASPB award may be granted in recognition of distinguished and long-term contributions to plant biology and service to the Society by current members in areas that include research, education, mentoring, outreach, and professional and public service. Current members of ASPB who have contributed to the Society for at least 10 years are eligible for nomination. The Fellow of ASPB honor may be granted to no more than 0.2 percent of the current membership each year. Sharp’s appointment increases the number of ASPB Fellows in the IPG to six, including Doug Randall, Tom Guilfoyle, Gary Stacey, Mel Oliver and John Boyer.

Randall is Professor Emeritus of Biochemistry, a MU Thomas Jefferson Professor and Fellow, and member of the National Science Board. He also is a Fellow of the AAAS. His research group is studying regulation of metabolism in plants. Randall is the founder of the IPG.

Stacey is a Missouri Soybean Merchandising Council Endowed Professor of Soybean Biotechnology, and is a professor of plant sciences. His research program includes studies of host-microbe interactions in plants, specifically the symbiosis between the bacterium Bradyrhizobium japonicum and the soybean. Stacey is also a Fellow with the American Academy of Microbiology and AAAS.

Oliver is research leader of the USDA-ARS Plant Genetics Rearch Unit on campus and an adjunct professor in the Division of Plant Sciences. His research looks to identify genes and processes that are central to dehydration tolerance in plants. He also is a Fellow of AAAS.

The IPG is a community of MU faculty, students, postdoctoral fellows and professionals who are pursuing novel, creative, and transformative ideas in the field of plant biology. It is comprised of 60 faculty-led research teams that represent three academic divisions: Biochemistry, Biological Sciences, and Plant Sciences – and three academic departments: Chemistry, Computer Science and Forestry.

Established in 1981, the IPG seeks to encourage interdisciplinary cooperation between scientists engaged in plant molecular biology, physiology, biochemistry, genetics, biotechnology, evolution, ecology, and computer science. The IPG’s aim in integrating these disciplines is to stimulate joint research projects that will enhance our understanding of how plants grow and develop in changing environments.