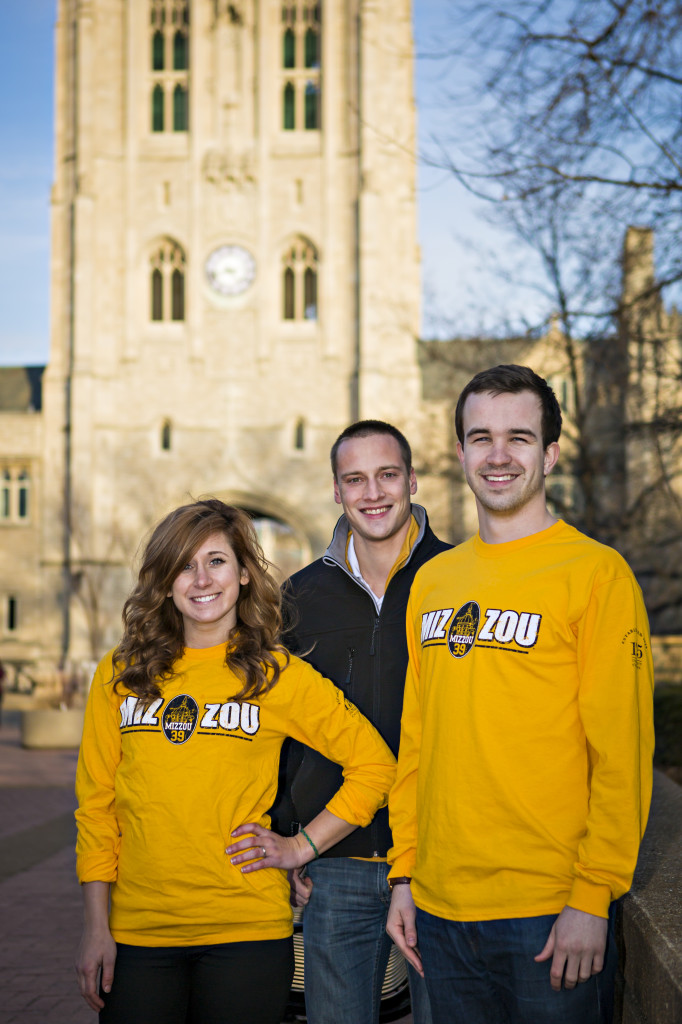 Six of this year’s Mizzou ‘39 award recipients are students of the College of Agriculture, Food and Natural Resources.

The Mizzou Alumni Association Student Board presents the Mizzou ’39 Award to 39 outstanding seniors each year. Chosen for their academic achievement, leadership and service to Mizzou and the community, the honorees represent a variety of majors, activities and organizations from across campus. Each winner also chooses a faculty or staff member to recognize as their adviser throughout their college career.

Alex Finck is a biochemistry student, and will be attending Mizzou’s medical school. He ultimately plans to practice medicine in a rural area in Missouri. He would like to work with underserved populations in Missouri.

“I learned about Mizzou ‘39 my freshman year and have quietly harbored a dream of one day being selected ever since,” Finck said. “Having cheered for Mizzou since I learned to talk, this award means so much to me and is one I won’t soon forget.”

It was difficult for Finck to choose just one favorite Mizzou memory.

“I think the football game against Florida this year distills everything I love about Mizzou into one day,” Finck said. “More specifically, I loved gator chomping at Florida when we knew the game was won. It gives me goosebumps just thinking about that game.”

“As a freshman at Mizzou, I set goals for myself of what I wanted to accomplish for God’s glory while I was here,” George said. “Mizzou ’39 was always something I was striving to achieve since it was an honor that really stood out to me on campus. I thought that if it was the bar I set for myself, then I could never fail because of the journey I experienced trying to get there. “

George’s favorite memories at MU include the tremendous energy at Mizzou’s 100th Homecoming football game, riding the Tiger for the first time, the feeling she had when she opened her Bid Day card, the day she met her boyfriend of two years in Ellis Auditorium, receiving the Outstanding CAFNR Steering Committee member award, and watching countless brothers and sisters in Christ being baptized in the famous fountain on campus.

Zack Hanson is a biochemistry student planning a future a career in medicine.  He is in the process of applying to medical schools. Hanson’s involvement at MU includes Beta Theta Pi Fraternity and Rockin’ Against Multiple Sclerosis Director. He also performs research on skeletal muscle regeneration in mice with Dr. Richard Tsika in the Christopher Bond Life Sciences Center.

“I applied for Mizzou ’39 because of all the experiences and opportunities Mizzou has provided me that have shaped who I am,” Hanson said. “I have worked hard to represent Mizzou well as a student, as a person, and to improve our campus and community; it’s something I have really enjoyed doing. I am honored to be recognized as a part of such a great group of people.”

Hanson’s favorite memory at MU is the summer after his sophomore year. “The first summer that I stayed in Columbia is my favorite memory,” he said. “Whether it was going to the pool at the Rec every day, hanging out on the quad or at Stankowski, or heading downtown with friends, it was a really unique experience to be here with such a small amount of people. It was then that I really fell in love with Mizzou and the campus!”

Brittni Kinney is a hospitality management student hoping to secure a full-time position with one of the ministries she is currently involved in in Columbia. “I want to continue in ministry and I would love to pursue further education in Biblical Studies by looking into a degree through seminary,” Kinney said.

Kinney is a member of Kappa Alpha Theta Sorority, MU Tour Team, 2012 Summer Welcome Team, has gone on the Won by One Jamaica Mission Trip three times, has participated in Alternative Spring Break twice, and is a small group leader for Veritas (a campus ministry) where she leads a Greek girls bible study. She is also a part of two ministries connected with The Crossing Church. Kinney was also a 2013 Panhellenic Counselor.

“I think that this award is incredibly intimidating,” Kinney said.” So often I feel that I am not sure how much I’ve contributed to Mizzou — I haven’t started a movement or created an organization or pushed for a beneficial legislation. There are so many other, far more qualified humans to win this award. That being said, my final (and fifth) year at Mizzou has been humbling and rewarding and satisfying in a way that was unexpected and appreciated — I wanted a chance to share that.”

Kinney’s favorite memory at MU was the snow days of 2014.

“This past snow day I was trapped on East Campus with some of my friends,” Kinney said. “We ended up attaching a sled to the back of a Jeep, and in a moment of true college stupidity, rode around on it through the streets. We built a snow fort and pelted innocent passersby with snowballs when they refused to surrender. Honestly, it wasn’t the activities we were doing. I hate the cold. But the group I was with was so drastically different from the people I had surrounded myself with previously that I couldn’t help but feel content and blessed by the growth of this past year.” 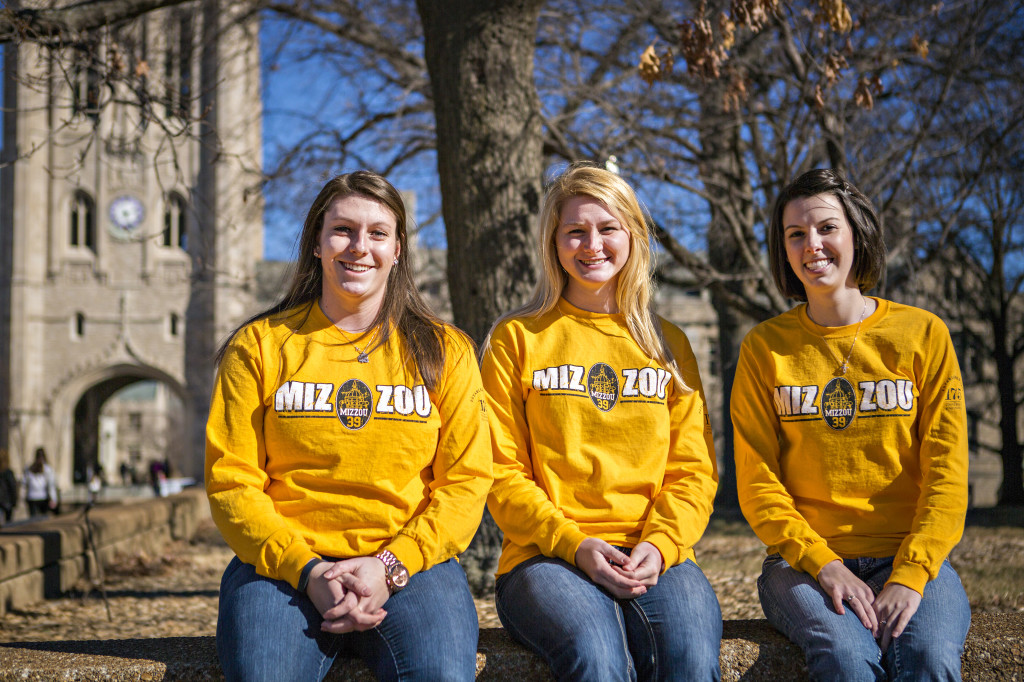 Katie Ottolin is a parks, recreation and tourism student planning to work in the world of sports after graduation. She would love to coach basketball one day, but as of now is applying for jobs in coaching, working for professional teams or colleges, or working for sport-related companies.

“I applied for Mizzou ‘39 because of my friends who had received the honor previously,” Ottolin said. “I always looked up to them for how much they gave back to the University. I was at first unsure about applying for Mizzou ‘39. My mom told me that she thought it would be a great opportunity, and I had nothing to lose by applying. It is such an honor to have been selected as the new 2014 Mizzou ‘39 class.”

“It is hard for me to choose just one favorite Mizzou memory,” Ottolin said. “I look back and think of all the people I’ve met and the crazy times I have had with my friends. If I had to choose one memory, my favorite is walking onto Faurot Field as the Homecoming Tri-Director at half time of the 2013 Homecoming game with my other two directors. Walking onto that field encompassed all the hard work we had done for the past year.”

Weis is a member of Sigma Alpha, Mizzou Agricultural Communicators of Tomorrow, Student Development Board, and is a media lab specialist for CAFNR Department of Educational Technologies

“Mizzou ‘39 is awarded to 39 outstanding seniors based on their academic achievement, leadership and service to Mizzou and the community,” Weis said. “Throughout my time here, I have strived to give back to Mizzou just as the school has opened the doors to countless opportunities for me, while still balancing the double major. The award culminates my five years at Mizzou and is one of the highest honors an undergraduate can receive.”

“One of my favorite memories during my five years at Mizzou was when Sharon Wood-Turley asked me to be a managing editor for CAFNR Corner Post,” Weis said. “During my first semester, I was a reporter for the online publication. My editors had given their time and talent and helped me grow. I looked up to them a great deal for this. When Sharon asked me to be editor, my time at Mizzou had come full circle. It was my turn to pay it forward and return the favor to another student. My education acquired at CAFNR was no longer mine alone; it was mine to share as someone had shared with me.”

Public revealing of the Mizzou ’39 student took place Feb. 10. Recipients were escorted to the steps of Jesse Hall facing the columns. Their names were announced and everyone present joined arms and sang the alma mater. On Feb. 11, recipients participated in and were recognized again at the Mizzou 175th Birthday Celebration in the Student Center. Recipients were also recognized at the Tennessee versus Mizzou basketball game during halftime. The basketball game was followed by an awards banquet at the Reynolds Alumni Center with recipients’ families and mentors. The Chancellor was present and gave a speech. Each of the 39 students were recognized, handed their pins and got to have their photo taken with the Chancellor.