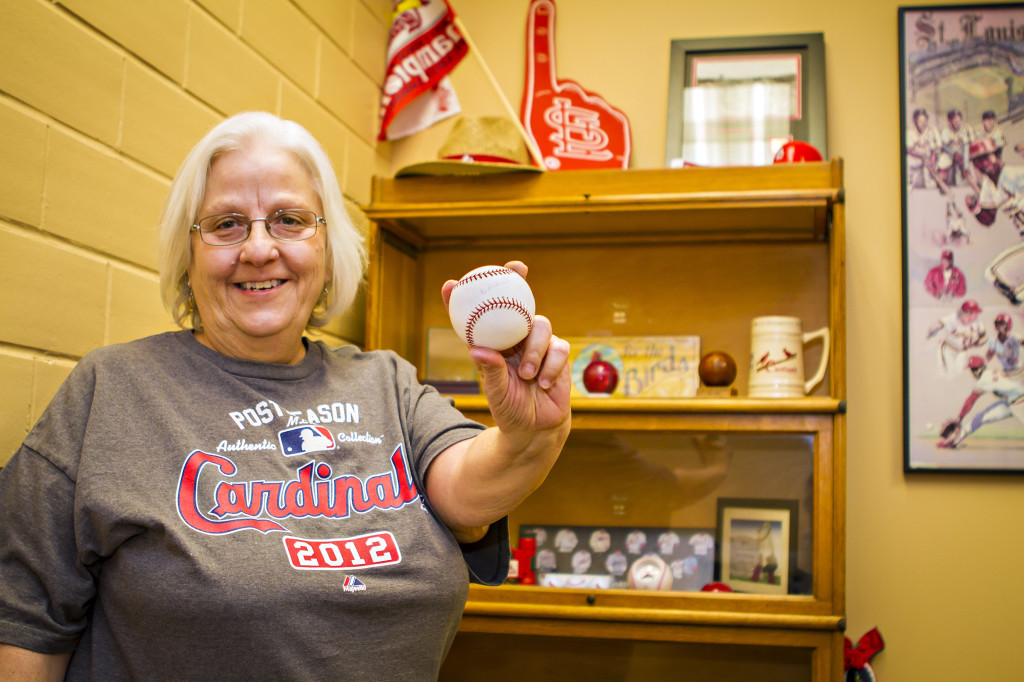 If you happen to be in the Agriculture Building, and you were to wander into the office of Debbie Lingle, grants and contracts specialist, Division of Plant Sciences, you would be greeted by a sea of Cardinal red. As spring training draws near, what better way to get excited than to surround yourself with an impressive collection of St. Louis Cardinals memorabilia?

Lingle grew up in the town of Richland, Mo., and moved to Columbia after meeting her husband. She has worked for the University of Missouri ever since. She has many hobbies, including reading, listening to The Beatles, and most importantly, watching Cardinals baseball.

“What I love most about baseball is the same thing that turns many people away from the sport,” Lingle said. “While some think that it’s boring waiting for each pitch, I love the strategy involved and the anticipation because anything can happen once the ball leaves the pitcher’s hand.”

Growing up, Lingle was surrounded by die-hard St. Louis Cardinals Baseball fans: her father and older brother. She adopted their ways, and continues to carry on the family tradition.  During her high school years in the early 1970s, Lingle began her collection of all things Cardinals with a T-shirt.

Since then, her collection has grown to include clocks, board games, autographed baseballs, calendars, jewelry, posters, lighters, key chains, magazines, knick knacks, flags ,and just about anything else you can think of. The majority of her memorabilia is displayed proudly in a glass cabinet in her office.

Lingle’s first favorite Cardinal was Curt Flood, who played for the Cardinals from 1958-1969. Since then some of her favorites have included Jim Edmonds, Scott Rolen, Tommy Herr, Darrell Porter, Adam Wainwright and Yadier Molina.

“My favorite piece of my collection is easily my Stan Musial autographed baseball,” Lingle said. “My husband got it for me four years ago.”

Lingle’s husband grew up outside of Kansas City, Mo., and was a Royals fan until Lingle proudly converted him to a Cardinals fan.

“I think my favorite Cardinal memory occurred when my husband and I visited the Hall of Fame the year that the Cardinals were the reigning champions,” Lingle said. “I got to strut around the building in my various Cardinal wear.  Believe me, I got some dirty looks from some Yankee fans on that day.  That last part alone will stick with me forever.”