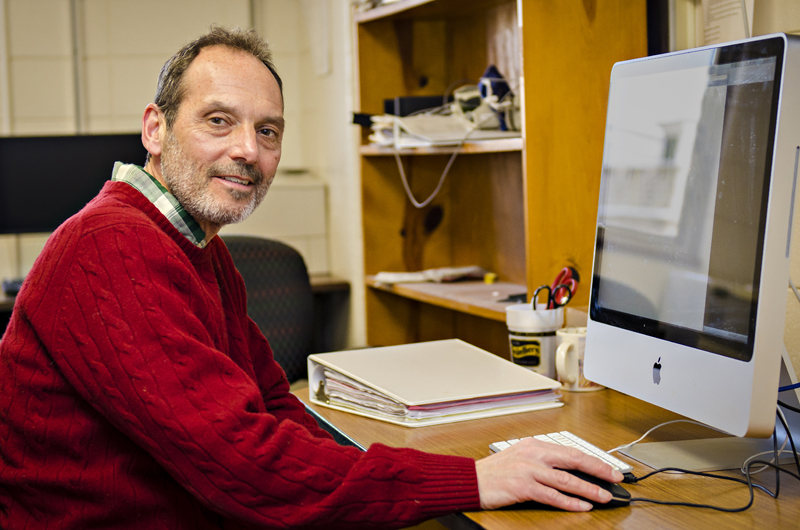 John Tanner at his office workstation. From here he conducts experiments in a football field-sized synchrotron in California.

There’s nothing like being there when researching subjects like pharmaceutical advances, except when it’s expensive and time consuming.

To speed structural biology experiments at the University of Missouri, researchers ship samples of protein crystals to California for testing. Mizzou researchers then conduct their studies from their office workstations, manipulating a robot that does the experiment in another time zone. 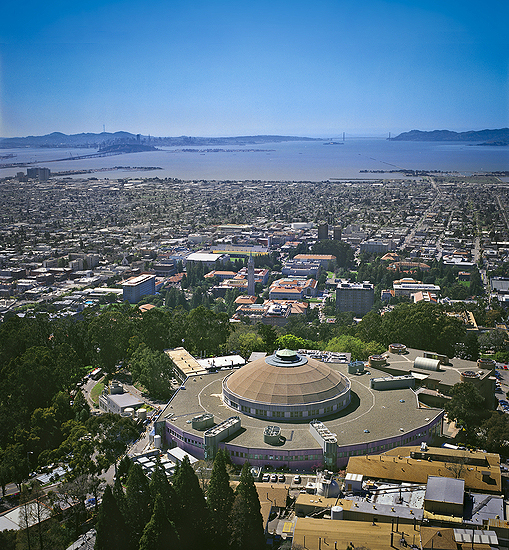 Mizzou can remotely use a synchrotron (the circular building) on the campus of the University of California-Berkeley.

The MU Department of Biochemistry is a founding member of the Molecular Biology Consortium (MBC), which operates an X-ray crystallography “beamline” at the Advanced Light Source (ALS) synchrotron in Berkeley, Calif.  The superconducting dipole magnet source device, popularly called a “Superbend,” is one of only five in the world.

Superbend synchrotrons are football field-sized instruments that accelerate electrons into high speed circular orbits so that intense beams of X-rays are emitted.  The beamline captures these X-rays, focuses them on protein crystals, and records the beams that diffract off the crystals. The three-dimensional structure of the protein is encoded in the diffraction pattern. Protein crystallographers decode the diffraction patterns to get the precise arrangement of the atoms in the protein.  This structure provides invaluable insight into how proteins function and provide blueprints for designing drugs that inhibit protein function.

The process begins at Mizzou, where researchers pack up frozen crystals for overnight shipment to beamline staff, who load them into the beamline’s robotic sample handling system. The robot allows users to remotely access the beamline, control crystal positioning, define protocols for X-ray exposure for screening or full diffraction data collection, and data transfer to the workstation in the users’ home institution.

The operation is both a cost- and time-saver. Previously, researchers had to travel to California to conduct experiments. 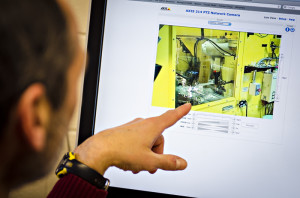 Tanner operates the California beamline from his campus office in Columbia.

“The remote beamline changes the way we do science,” said John Tanner, professor of Biochemistry with a joint professorship in Chemistry and who spearheaded MU’s participation.

“We can do an experiment at the beamline in about three minutes that would take three days using our campus diffraction system,” he continued.  “Furthermore, because of remote access, we can get our crystals into beamline any time we want. Anytime we have crystals, we are a FedEx overnight shipment away from collecting data at one of the most sophisticated beamlines in the world.  It’s like having the synchrotron on campus. In fact, my students say that it is more convenient to collect remotely at ALS than to walk over to our campus setup!”

The bottom line is that Mizzou can do many more preliminary experiments quickly and easily than in the past, Tanner said. “We can experiment with literally hundreds of crystals grown under different conditions.  Our remote beamline changes the paradigm of structural biology research.”

Crystallography and the Early Stages of Drug Discovery

Tanner’s research emphasis is in using three-dimensional structure to understand enzyme function.  Enzymes are nature’s catalysts.  They are required for life as we know it, and sometimes enzymes are the targets of pharmaceutical drugs.  In such cases, the enzyme’s three-dimensional structure aids development of new drugs by providing a blueprint for designing molecules that bind to and inhibit the enzyme. 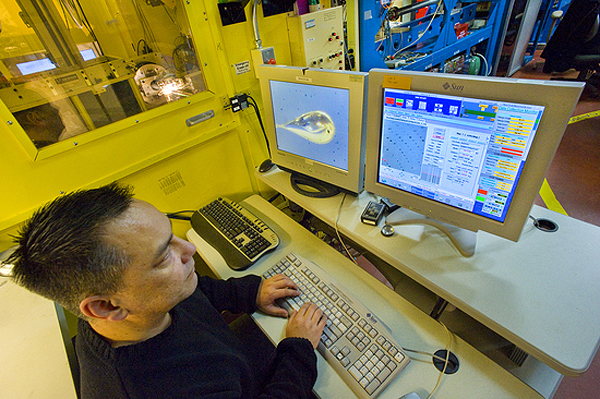 In California, an assistant loads MU crystals into the beamline.

“High resolution structural information is indispensable for understanding how proteins function, and X-ray crystallography is the method of choice for getting high-resolution structural information,” Professor Tanner said. “For example, structures of enzymes with substrates or substrate-like compounds inform us about substrate recognition, which provides insight into the chemical mechanism.”

Tanner points out that most pharmaceuticals work by inhibiting enzymes. “If we can knock out the enzyme, then the disease can’t continue,” he said.

Tanner points out that crystal structures are the key to the design of new enzyme inhibitors. Such inhibitors are an important component of drug development. “Thus, protein crystallography plays an important role in the early stages of drug discovery,” he said.

Using the beamline is tremendous time saver. Not only is the trip to California not needed, but results can come in in as little as few minutes, as opposed to several days with conventional methods. 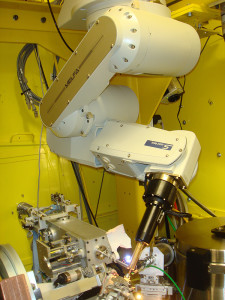 Peeking into Vitamins, Drugs and Proteins

X-ray crystallography is a tool used for determining the atomic and molecular structure of a crystal, in which the crystalline atoms cause a beam of X-rays to diffract into many specific directions. By measuring the angles and intensities of these diffracted beams, a crystallographer can produce a three-dimensional picture of the density of electrons within the crystal. From this electron density, the positions of the atoms in the crystal can be determined, as well as their chemical bonds, and various other information.

X-ray crystallography isn’t new. The technique was developed in the early 1900s shortly after the discovery of X-rays by Wilhelm Röntgen in 1896. In the first decades of use, it determined the size of atoms, the lengths and types of chemical bonds and the atomic-scale differences among various materials. For his work, Röntgen in 1901 was awarded the first Nobel Prize in Physics.

The method also revealed the structure and function of many biological molecules, including vitamins, drugs, proteins and nucleic acids such as DNA. X-ray crystallography is still the chief method for characterizing the atomic structure of new materials. X-ray crystal structures can also shed light on chemical interactions and processes, and serve as the basis for designing pharmaceuticals. 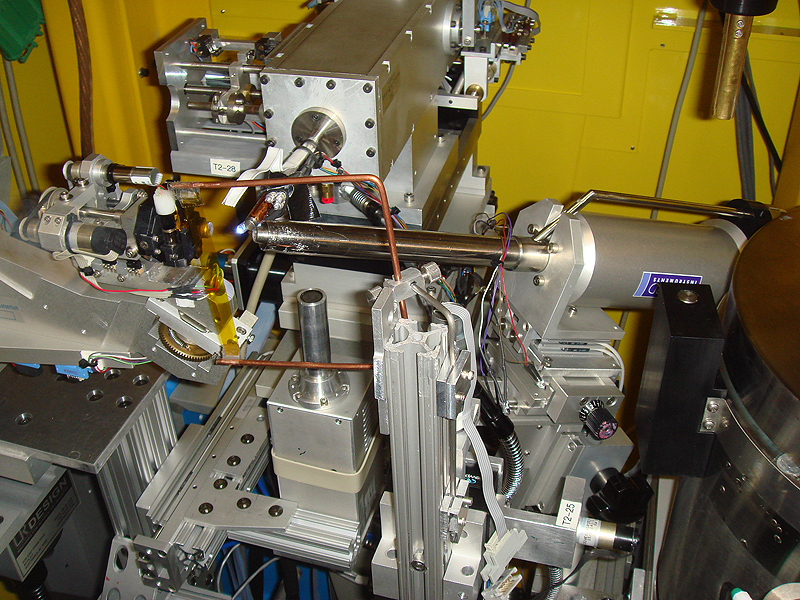 A close up of a crystal in the beamline.

The Molecular Biology Consortium is a nonprofit corporation dedicated to basic and applied research in biological science and synchrotron technology. With MU, the consortium includes the University of Texas Medical School, Oregon Health Sciences University, Loma Lina University and the University of Minnesota.  Each member group provided a capital investment to build the MBC beamline and provides annual contributions toward its operation.

“This is paradigm-shifting technology that gives Mizzou researchers essentially immediate access to one of the most sophisticated instruments used in biochemistry today,” Tanner said. “It accelerates the pace of research.”

Biochemistry is a joint effort of the University of Missouri School of Medicine and the College of Agriculture, Food and Natural Resources, and shares faculty with more than five other departments as well as with the Life Sciences Center.