During the ceremonies honoring J.C. Penney for his donation… Expand ▸ 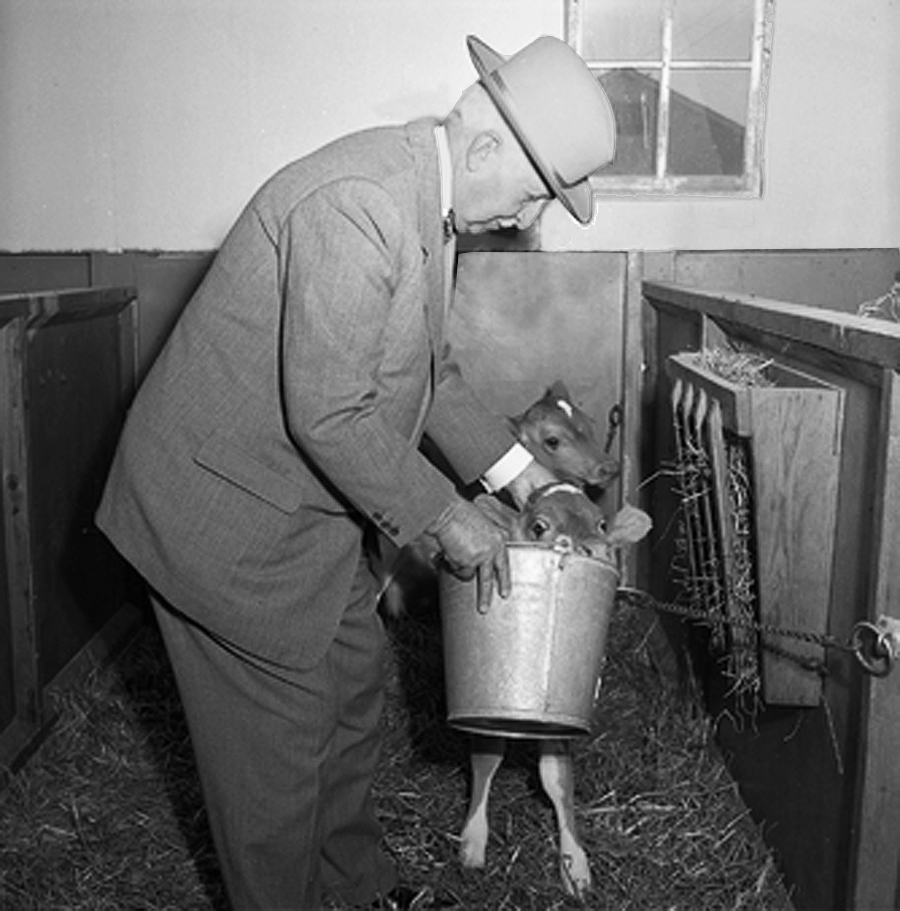 Every American shopper has visited a J.C. Penney store. While its namesake, Missouri-born James Cash Penney was a famous mercantilist, he also was passionate about agricultural research. To that end, in 1952 he donated one of the world’s most respected dairy herds to establish CAFNR’s Foremost Dairy Research Center, west of Columbia.

Six decades later, Penney’s vision is still alive at the working farm. Students run a dairy operation from milking and feeding to waste disposal, breeding and fiscal management. Experiments maximize milk output while maintaining herd health. The site is known for community commitment – thousands of grade school kids and farmers tour the barns to see the latest in dairy management.

He was the seventh of 12 children, only six of whom lived to adulthood. Penney’s father was a Baptist preacher and farmer whose strict discipline included making his sons pay for their clothing. 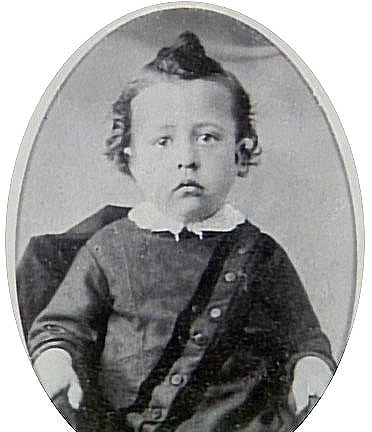 “Jim” Penney’s intention after high school was to earn a law degree at the University of Missouri. His father’s untimely death changed those plans, with Penney clerking in a Hamilton store to support the family, according to Hamilton’s J.C. Penney Museum.

In June 1897, concerned about his diagnosis of tuberculosis, the 22-year-old ventured to Longmont, Colo., where the dry mountain air was thought to have recuperative properties. He found employment with a dry goods store.

By 1902 the store’s owners, Guy Johnson and Thomas Callahan, were so impressed with Penney’s work ethic and salesmanship that they offered him a one-third partnership in a new store in Kemmerer, Wy. Penney named the operation the Golden Rule, and would open two more stores before buying out his partners in 1907. By 1912, Penney owned 34 stores in the Rocky Mountain states. 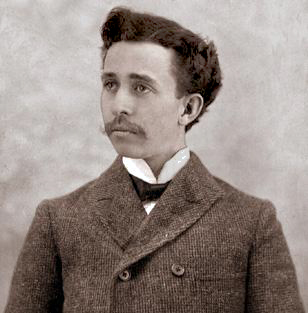 Penney lost virtually all his personal wealth (valued at $40 million) in the 1929 stock crash and borrowed against his life insurance policies to meet the company payroll. At one point, he and his wife canned vegetables from their garden. Financial setbacks took a toll on his health, and he checked into the Battle Creek Sanitarium. He then rebuilt his company store by store. During a 1940 visit to Des Moines, Penney trained a young Sam Walton to wrap packages with a minimal amount of ribbon. Penney remained as chairman of the board until 1946.

Penney never forgot his hardscrabble upbringing and the effect it had on his health. In the 1920s the nutritional yield of America’s dairy and beef cattle was generally poor, and Penney took it upon himself to improve livestock. He first purchased his father’s farm near Hamilton on which he established a purebred Aberdeen Angus herd. No gentleman farmer, he wore old work clothes and took a hands-on role. At the farm he experimented with the first terracing in Missouri.

He then purchased the Emmadine Farm in New York where he established a purebred Guernsey dairy herd. Penney started it with the very best – a prize-winning Wisconsin bull named Langwater Foremost. The animal cost an astounding $20,000. 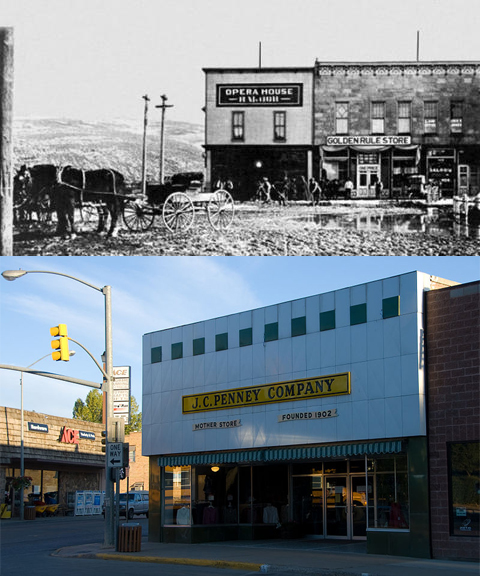 Langwater Foremost was one of the most famous animals of his day, and sired offspring that “became remarkable examples of milk inheritance through line-breeding,” according to historical records at J.C. Penney’s Dallas headquarters. The bull sired 68 registered daughters and 87 registered sons. His progeny was the basis of the Foremost Dairy Company.

Penney’s abilities at breeding were as good as his salesmanship. A second-generation animal named Langwater Faithful set a world record by producing 20,017 pounds of milk and 976 pounds of butterfat in one year. Mixer May Royal, another of Penney’s cows, took second place. Mixer Faithful was voted the most influential cow of the breed in a popular poll of breeders.

Subsequent generations confirmed Penney’s concept of careful herd management. Superb Faithful produced more than 1,000 pounds of butterfat in each of three consecutive years. Foremost Lida set two consecutive world records, producing 17,675 pounds of milk and 963 pounds of butterfat in one year. Penney’s animals were so respected that some were shipped to England – where the breed originated – to improve herds there.

Partnering with the MU College of Agriculture

Penney planned to make a substantial gift to the MU College of Agriculture to take effect in 1996, but he advanced his plans after being briefed on Mizzou’s animal husbandry research. In 1952, Penney donated his beloved New York farm to CAFNR to promote research and education in the feeding, breeding and diseases of dairy cattle. In January 1954, the College of Agriculture took possession of the Guernsey herd of 268 animals valued at $200,000, $350,000 in cash and $200,000 from the sale of the New York property. 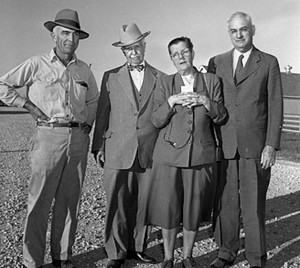 Penney was familiar with Missouri’s College of Agriculture and visited it as a farmer, not as a business magnate. He owned eight farms in the state and consulted regularly with faculty regarding ways to improve production. Penney enthusiastically supported the research of Arthur Ragsdale, chair of Dairy Husbandry. “Missouri is my native state,” Penney said. “I am proud of its College of Agriculture.”

Penney and Ragsdale agreed that it was critical to keep the Guernsey herd together as a breeding unit.

“When I began to study purebred cattle, I was astonished and distressed to learn that every great herd in the United States had been dispersed upon the death of the owner to settle the estate,” Penney told Missouri reporters in 1952. “I also discovered that the average life of a breeding unit in America is less than 10 years, and that few had been in existence as long as a quarter century.”

Penney’s herd was trucked from New York to the newly-named Foremost Dairy Center. Its original 160 acres had been purchased by MU in 1938, and the Penney donation increased it by 500 acres. It would be added to again with money from Penney’s will in 1971, creating its present size of 820 acres.

The herd by 1955 numbered nearly 300 head of animals of all ages. These cows produced more than a million pounds of milk a year. That averaged 11,628 gallons of milk a month, or 387 gallons a day. The milk, under an MU brand, was distributed to the dormitories, Student Union, University Hospital and other departments. 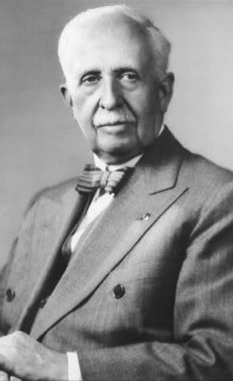 Today, the farm is still doing science that Penney would recognize. The Center maintains a lactating research dairy herd, and projects include heat stress evaluation, forage utilization and the potential use of by-products as feed. Researchers also study reproductive physiology, including embryo transfers, hormonal control of lactation and the effects of cystic ovaries in reproduction.

Even after his donation to Mizzou, Penney kept buying cows. He began a Hereford breeding project as soon as his Guernseys were safe in Missouri.

In his last decades, Penney was a popular speaker and respected author. Although Penney was only a high school graduate, he received honorary degrees, including an Animal Husbandry doctorate from the University of Missouri.

The day after Christmas 1970, Penney fell and fractured his hip. A few weeks later he suffered a heart attack and never fully recovered. He died, aged 95, on Feb. 12, 1971. The Rev. Dr. Norman Vincent Peale delivered the eulogy.

Penney is buried in the Bronx, N.Y. His Woodlawn Cemetery grave is not far from that of fellow retail entrepreneur, F.W. Woolworth.