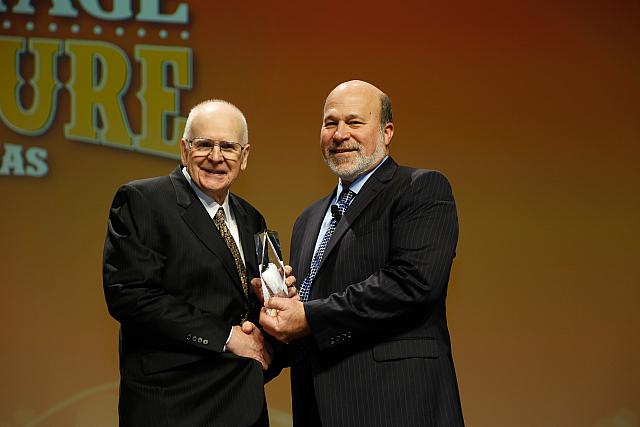 Abner Womack, professor emeritus and research professor of agriculture economics at the College of Agriculture, Food and Natural Resources, University of Missouri, was presented the Distinguished Service Award by the American Farm Bureau Federation. He shared the honor with Sen. Richard Lugar (R-Ind.).

The award is the highest honor by the association. It honors individuals who have devoted their careers to serving agriculture.

Womack has made agriculture his life’s work. His early expertise in mathematics became focused on developing a system of statistical models for U.S. crops and livestock. A pioneer in this area, Womack worked to create annual baseline analysis of U.S. and global agriculture. He was also the primary founder of the Food and Agriculture Policy Research Institute, which is internationally renowned for its high-quality analysis. On a federal level, FAPRI’s work is used widely in the halls of Congress and the Agriculture Department to determine economic impacts of policy issues.

While Womack has been recognized nationally for outstanding service within agricultural economics, he has remained focused on working directly with farmers and ranchers.

“Dr. Womack embodies a unique and giving spirit. He yearns not to make decisions, but to provide others with the tools to do so,” said AFBF President Bob Stallman. “He has experienced agriculture from many sides, including as a farmer, USDA employee, consultant to agribusiness and farming organizations and an advisor to college students. He has made a true difference in the agriculture industry.”

Through Sen. Lugar’s singular efforts, the Conservation Reserve Program was incorporated into the 1985 farm bill, thus creating the basic CRP program that remains in effect today. He was also instrumental in the elimination of set-asides and planting limitations to base acres for a particular crop, which led to the concept of planting flexibility contracts.

Since leaving the Senate in 2012, Sen. Lugar has continued to advocate for many of these important issues as president of the non-profit Lugar Center.