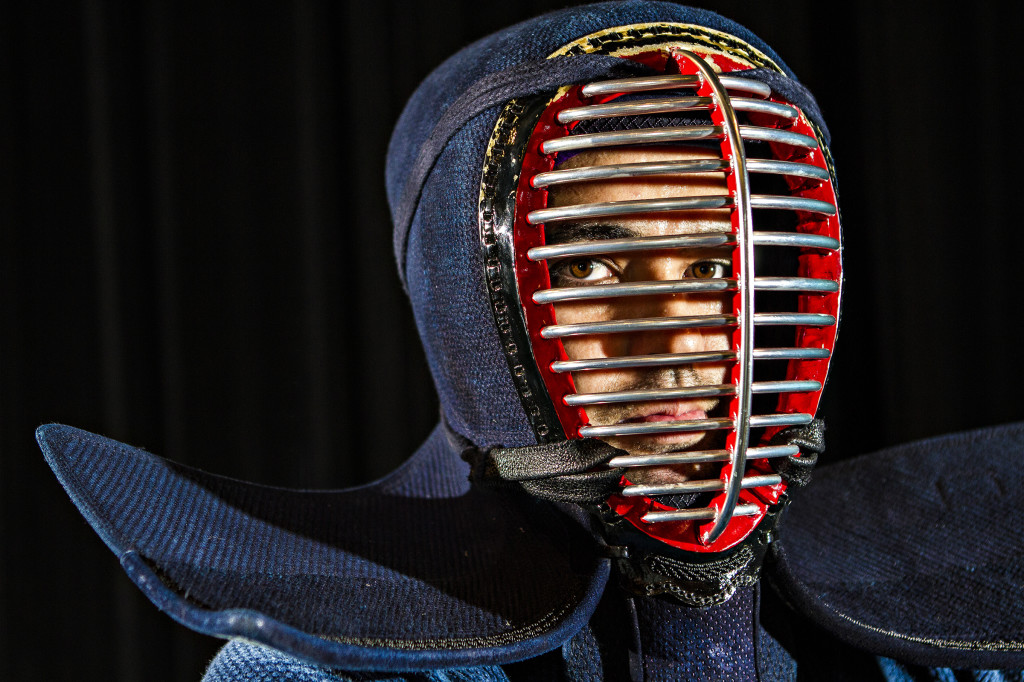 For more than eight years, Nick Watanabe has been practicing the sport of Kendo. Photo by Kyle Spradley

Nick Watanabe, assistant teaching professor in Parks, Recreation and Tourism at Mizzou, educates his students to find careers with the major sports organizations around the globe.  Watanabe’s personal hobby is not the expected baseball, football or even soccer, but a sport with origins in feudal Japan. Watanabe has earned a second degree black belt in Kendo, a martial art in the tradition of the Samurai.

Kendo, meaning “Way of The Sword,” is a modern Japanese martial art, which descended from traditional Samurai swordsmanship (kenjutsu), and uses bamboo swords (shinai) and protective armor (bōgu). Today, it is widely practiced in Japan and other nations across the world. Practitioners of Kendo are called kendōka, meaning “someone who practices Kendo.” 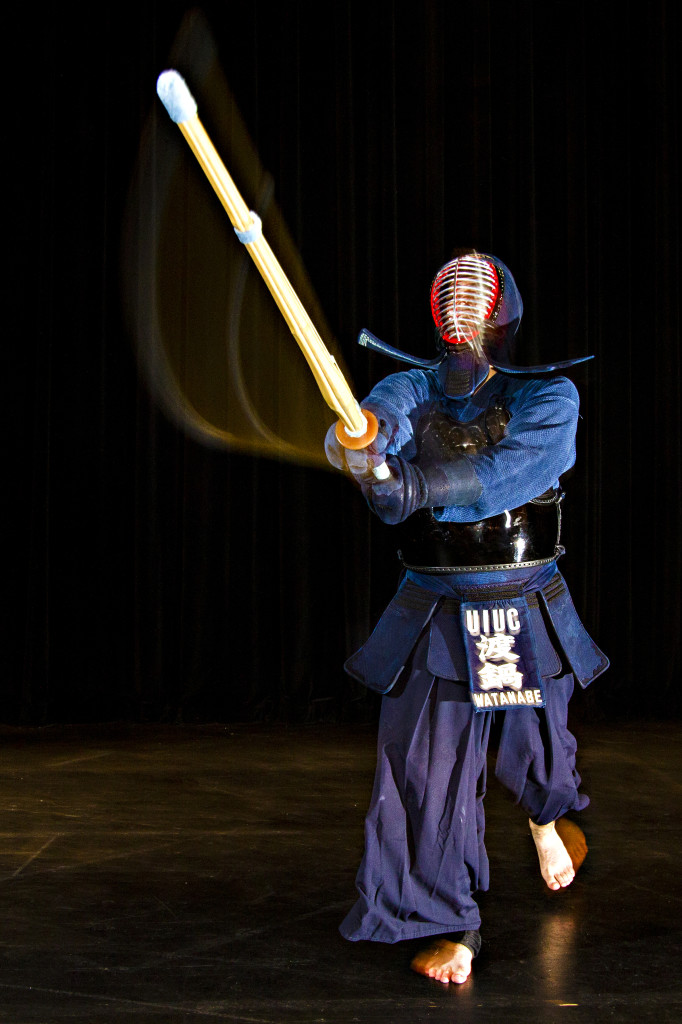 Nick Watanabe performs a common strike move aimed at getting a point against an oppenent. Photo by Kyle Spradley

Kendo is rooted in the traditions of Budo, the Martial Way. It is designed to discipline the human character through the application of the principles of the katana, the Samurai sword. Kendo’s centuries-old purpose is to mold the mind and body, cultivate a vigorous spirit and to accentuate the courteous and honorable. With its curved blade, the katana is renowned for its sharpness and strength.

A Sporting Interest Fueled by Soccer

Watanabe was born in Champaign, Ill., and earned his doctorate in sport management from the University of Illinois in that city. He became interested in the field, then a fairly new concept, in 2001-2003 while working in community relations and promotions for the Chicago Fire Soccer Club. “I liked what I was doing there and was encouraged to continue my education in this growing profession,” he said.  “While in school I discovered that I enjoyed teaching.”

Watanabe was recruited by David Vaught, department chair of Mizzou Parks, Recreation and Tourism, to help start a Sport Management program. They started with 10 enrolled students.  Three years later there are 450 students in the program – easily the fastest growing program on campus.

This program prepares students for the highly competitive sport management industry. It aims to develop students into productive and highly successful sport managers by continuously analyzing sport in a critical and insightful manner over the course of research, teaching and hands-on experience. 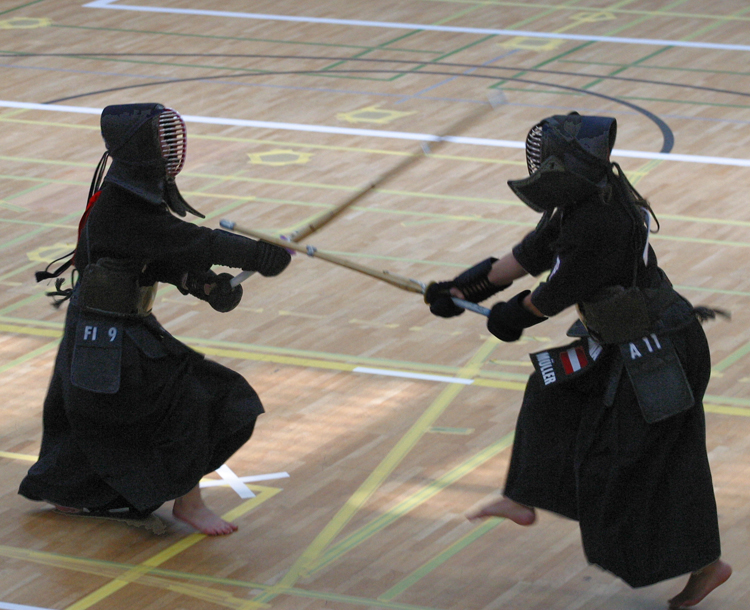 Watanabe became interested in Kendo in a causal way eight years ago. “I had a friend who did it, so I went to practice and watched, and the next thing I know I was practicing myself.”

Watanabe has competed in Kendo competitions throughout the Midwest, mostly in Kansas City and St. Louis, and occasionally teaches the sport. “I do it partly for the enjoyment, but also as a form of self improvement,” he said. Kendo hasn’t caught on in Columbia as it has in other university cities. Watanabe hopes that it will, eliminating a long drive for him to find someone to practice with.

In Japan the first degree black belt is called Sho-dan – meaning beginning level.  Watanabe’s level is the Ni-dan, the second of 10 levels in the Dan system. An seventh level Nana-dan must wait 10 years before proceeding to the Hachi-dan, the eighth level.

Before getting into the rated Dan system, a kendōka must practice and move through the unranked Kyu system.  For some people this beginning period can be as a short as a year or two, but for others it can take several years.

“In Kendo, you must wait a certain time period between tests, which gets longer as you become a higher rank,” Watanabe explained.  “For example, after passing the first degree black belt test, you are not even allowed to test again for a calendar year.  After getting second degree you must wait two years.  Thus, it takes quite a while and lots of practice to get higher ranks in Kendo.”

The Kodansha Meibo, a register of graded members of the All Japan Kendo Federation, shows that there are approximately 6 million kendōka in the world. 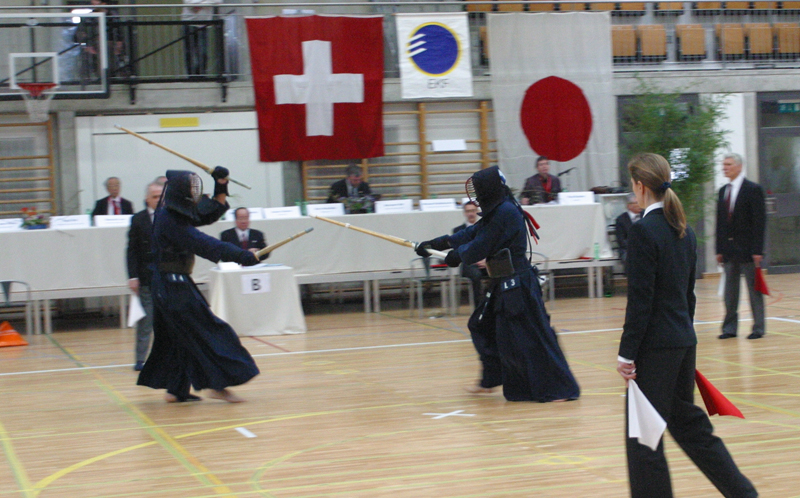 Kendo training is noisy in comparison to other martial arts. This is because a kendōka uses a shout, or kiai, to express their fighting spirit when striking. Additionally, kendōka execute fumikomi-ashi, an action similar to a stomp of the front foot, when making a strike.

Like other martial arts, kendōka train and fight barefoot. Kendo is ideally practiced in a purpose-built dōjō. The best venue has a clean and well-sprung wooden floor, suitable for fumikomi-ashi.

Modern Kendo techniques comprise both strikes and thrusts. Strikes are only made towards specified target areas (,datotsu-bui) on the wrists, head or body – all of which are protected by armor.

“In Kendo we are often searching for the perfect moment where you make the perfect attacking strike,” Watanabe said.  “Of course this really doesn’t happen, so the concept of striving for something is of great importance.  It teaches one to always be trying to improve in all aspects of life.”