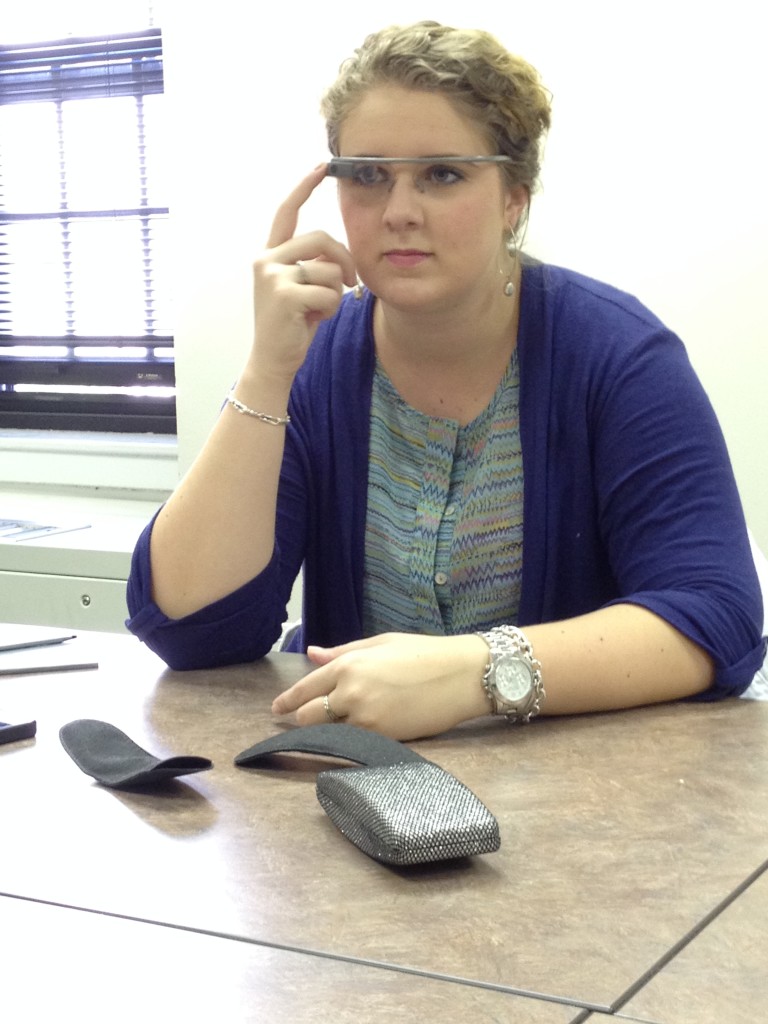 Science and Agricultural Journalism senior Courtney McBay had the opportunity to test-drive Google Glass during Rasa’s visit to MU in early November.

Two University of Missouri students, Kate Hrdina and Rachel Zamzow, were part of the first group of users to try the new Google Glass, to cover the World Food Prize.

Hrdina, a senior in science and agricultural journalism’s food and wine writing track from Columbia, Mo., and Zamzow, a doctoral student in neuroscience from Austin, Texas, used the Glass to cover the World Food Prize Oct. 17 in Des Moines, Iowa.  Zamzow wore Glass, and Hrdina led her on a brief tour of the conference.

Google Glass is a wearable computer that uses data from the user’s smartphone or tablet and displays a screen in the upper right hand corner of the user’s field of vision. It has 16 gigabytes of storage, a 5-megapixel camera, voice command and a touchpad for control.

The two students were given the opportunity to wear the glasses after MU alum, Bruce Rasa, was chosen as one of the 8,000 people invited to buy a test version of Glass through the Explorer Program.

The Explorer Program launched earlier this year, and was designed for people who want to get involved early and help shape the future of Glass. Participants won a contest requiring U.S. residents to submit 50-word applications through Twitter or Google Plus explaining how they would use Glass using the hashtag #ifihadglass.

“Getting the opportunity to use Google Glass at The World Food Prize event was both fun and educational,” Hrdina said. “I don’t consider myself a ‘techie’ by any means, so it was pretty neat to use something that’s so cutting edge. I was covering such a huge event that highlighted how new technology has impacted agriculture, and I got to see how technology is impacting my field of work as well. Bruce’s idea of using Google Glass for farmers is brilliant. It combines two sometimes seemingly disparate worlds into one.”

“It is interesting how the Glass might affect the interview process for journalists,” said Nina Furstenau, science and agricultural journalism instructor. “The Google Glass makes your realize journalism is always evolving and improving.”