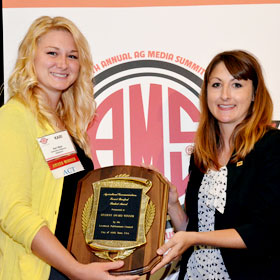 Kari Weis, a senior science and agricultural journalism and plant science major, was awarded the 2013 Forrest Bassford Student Award. The award was announced at the Agricultural Media Summit in Buffalo, N.Y., in August.

The Forrest Bassford Award is given by the Livestock Publications Council to reward “excellence, leadership and encourage professionalism among students.” The student winner receives a $2,000 scholarship. This opportunity provides the recipient face-to-face exchanges with leaders in livestock publishing.

Weis chose her double major so she could help scientists relay their message to a broad audience. She has interned with Syngenta, University of Arkansas, RFD-TV, Cummins Consulting, National FFA Convention, and the Center of Plant Conservation. She is a member of the MU Agricultural Communicators of Tomorrow chapter, of which she was national treasurer and secretary from 2011-2012. Weis is also minoring in business.

“Not only was receiving this award a goal of mine, it is an honor that the Ag Media Summit professionals find me worthy of such an award,” Weis said.