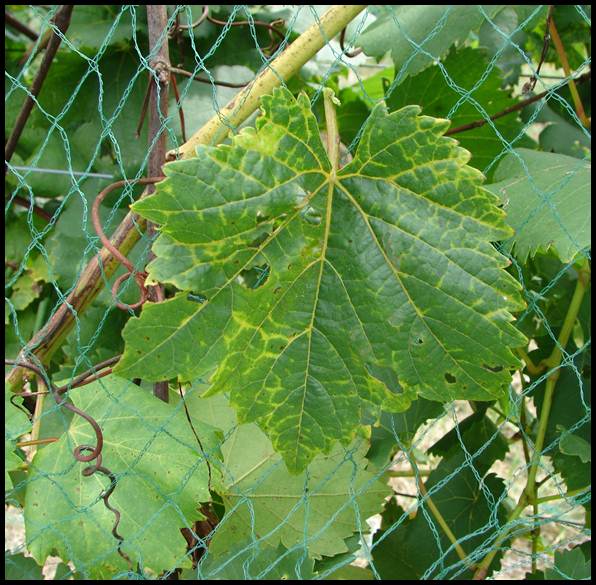 Vineyards of the Midwest may be in danger by an emerging virus. A little bug not normally indigenous to Missouri is being tested to see if it is the culprit in the spread of this new viral disease.The Grapevine vein clearing virus (GVCV) was first discovered in 2004 in a commercial vineyard in Augusta, Missouri. The disease gets its name from typical symptoms including translucent veins on young leaves and a decline of vine vigor. In the advanced stages, the affected vines become dwarfed and bear fewer fruit sets.

James Schoelz, professor and director of graduate studies in Plant Sciences at the University of Missouri College of Agriculture, Food and Natural Resources, has paired with Wenping Qiu of the Center for Grapevine Biotechnology at Missouri State University, to study this virus and determine how it is spread.

The research question being studied at Mizzou’s main campus is, “How is GVCV being spread in vineyards?”  Tucker Greenhouse there holds plants and insects of all sorts. Among the bugs loitering there were some mealybugs– one of the prime suspects for transmission of GVCV.  The mealybug is a tiny white insect that prefers moist, warm climates. The bugs were found in the greenhouse by Ben Puttler, assistant professor emeritus of entomology, while he was investigating other bugs. 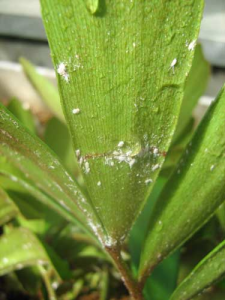 Mealybugs on the underside of a Cycad leaf

“The mealybug can transmit different viruses to grapevines,” Schoelz said. “They could very well be the vector for this virus. The important thing about finding the mealybug in Missouri is that experiments can be done right away.”

So, Puttler and entomology graduate student Lauren Diepenbrock began to build a test colony of mealybugs. To do this, they started with a sprouted potato in an infested pot.

The mealybugs quickly found the succulent young potato shoots, and then attached themselves to the shoots and began feeding.  Mealybug feed on plant sap, normally in roots or other crevices. They attach themselves to the plant and secrete a powdery wax layer used for protection while they suck the plant juices. 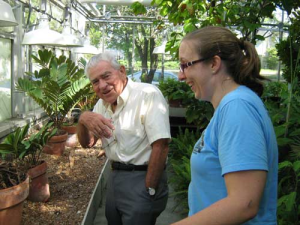 Puttler and Diepenbrock check on their potatoes on a regular basis, and replace them with new spuds when the previous ones are full of mealybugs.

The two next steps in the experiment will determine if the mealybugs are the vector in the GVCV virus. Schoelz and his graduate student Yu Zhang will let their mealybugs feed on infested test vines, to see if the virus is picked up by the bug. If the bugs do pick up the virus, they will be moved to healthy test vines to see if they transmit the virus.