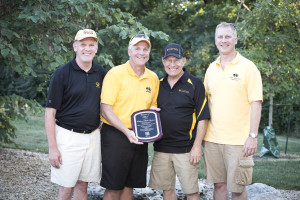 William (Bill) Buckner was presented a Citation of Merit award from the Mizzou Ag Alumni Association at their recent annual Steak Fry. Buckner was also part of the winning golf team at the association’s Tiger Ag Classic Golf Tournament earlier that day.

Buckner graduated from CAFNR in 1980 with a bachelor’s degree in agricultural economics. He is the CEO of the Noble Foundation, which conducts plant and animal science research and sponsors agricultural programs to enhance agricultural productivity regionally, nationally and internationally. Previous to this position he rose through the ranks at Bayer where he became North American president and CEO of Bayer CropScience LP.

During his 30-year career, Buckner worked in a series of international locations. In 1996, he moved to Monheim, Germany, where he worked for the Bayer’s Animal Health Business Group as a business development manager. From Germany, he relocated to Toronto when he was selected as vice president and general manager of Bayer’s Canadian Agricultural business in 1998. Four years later he was appointed to the role of president and CEO of the Canadian subsidiary, Bayer CropScience, in Calgary, Alberta.

“He took bold leadership of an environmental stewardship program at Bayer and made it a model for the industry,” noted Ken Schneeberger, CAFNR international training coordinator. “His leadership during this period got him selected as a CAFNR Executive-in-Residence. Students loved him.”

“During his tenure as leader of Bayer’s ag operations, Bill led the transformation of Bayer’s North American business from a legacy crop protection/pesticide ag company to an R&D-driven biotech leader, poised for growth for years to come,” said Nicholas Kalaitzandonakes, endowed professor, agricultural and applied economics. “This transformation was achieved with targeted and successful acquisitions, the remaking of the company’s research portfolio and talent as well as the repositioning of product offerings in tough and highly competitive commodity markets.”

Buckner is active in supporting several nonprofit and biotechnology organizations in Raleigh, N.C., and Ardmore, Okla. He is a member of the National Board of the National Wild Turkey Federation, serves on the board of Mercy Memorial Hospital, Ardmore Main Street Authority and provides leadership as the Vice Chairman of the Oklahoma BioScience Association.