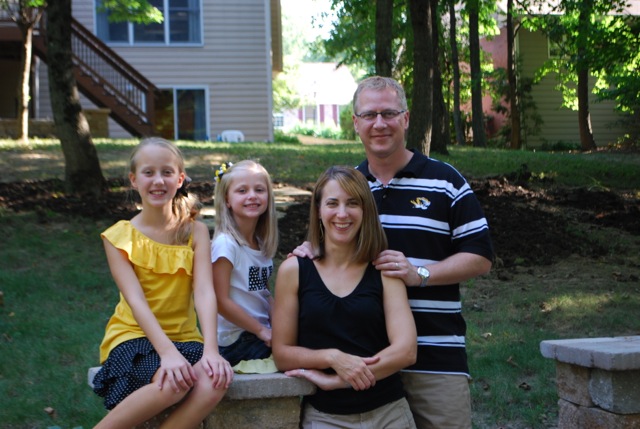 Black and gold runs deep in the family of Alan Weber, president of the Ag Alumni Association Board. Weber received his B.S. in agriculture in 1991 and M.S. in agricultural economics in 1993 from MU. His wife, Karen, is also an alumna of MU, class of 1998. Both of Weber’s parents as well as his sisters and Karen’s sisters are all MU graduates. Alan and Karen have two daughters: Rachel, 9, and Sarah, 5. The jury is still out if they will be Tigers, but Alan and Karen will do their best.

“In a word, Mizzou, and CAFNR, mean family, from undergraduate to even now,” Weber said. “I realize family means different things to different people. For me, it was having a place where I felt comfortable and where I could depend on support as an undergraduate. In graduate school, my mentor Don Van Dyne helped me to view agriculture through a different lens and ultimately to start my company. Now, I enjoy working with the other Ag Alumni Association members to help current students have that same experience.”

Weber credits his father with being a major influence in his education and career.

“One day I asked for advice about college and he said, ‘everything starts in the soil and ends up as money,’” Weber said.  “To that end, I pursued a degree in Ag Economics but also a minor in Agronomy.”

Aside from presiding over the Ag Alumni Association Board, Weber is a founding partner of MARC-IV, a firm founded to help commercialize new, innovative industrial products from renewable agricultural materials. He has been a presence within the biodiesel industry since 1991. Weber assisted with the establishment of the National Biodiesel Board’s Washington, D.C., office in 2007 and continues to provide economic and technical support to their efforts. He also currently leads industry feedstock development efforts to increase raw materials sources. Weber was recently appointed by the U.S. Secretaries of Agriculture and Energy to serve on the Biomass Research & Development Initiative Technical Advisory Committee. He is also an alumni of FarmHouse Fraternity.

Although Weber works full-time with MARC-IV, he remains actively engaged with the management and operation of his family’s 875-acre farm in central Missouri.

In 2013, Weber became president of the Ag Alumni Association Board.

“I think about the number of professors and staff at CAFNR that invested in making my experience positive,” Weber said. “It was an easy decision to volunteer for the Ag Alumni Association. As a volunteer we do not receive pay in the traditional sense. Our payment comes in the form of fulfillment and an occasional pat on the back. I have worked with a number of non-profit and volunteer boards, but none that are as upbeat and fun to be with as the Ag Alumni Association Board.”

Twenty years ago, Weber donated to and became a member of the Ag100 Club.

“I started with a $100 check and, at the time, had no idea what it could grow to become,” Weber said. “As the Endowment grows and as we seek milestones such as $1 million next year, we are able to support CAFNR students in new ways few could have thought of when it began. Many alumni identify with Ag100, but I bet few are aware of how many student groups and CAFNR programs that are supported by the Endowment.”

“It’s a guarantee that you will see friends, tell the same worn-out stories one more time, and support CAFNR at the same time,” Weber said.