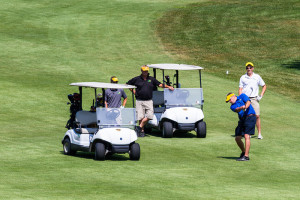 This year’s tournament, sponsored by the Mizzou Ag Alumni Association, hosted more than 130 golfers who helped raise an anticipated $20,000 for CAFNR scholarships and teaching enhancements.

Following the tournament, the golfers and other CAFNR friends met at Cosmo Park for the annual Steak Fry and to announce the winners of the Paul Vaughn Memorial trophy. The day was hot, and so were participant’s golf games. The winners of the Championship flight were CAFNR Dean Tom Payne, Alumnus Bill Buckner, Alumnus Gene Gerke, and CAFNR student Emilio Cuartero, senior in agribusiness and a Mizzou Men’s Golf Team member, from Spain.

“Coach Leroux heard about me being interested to coming in the U.S.,” Cuartero said. “We Skyped and I loved his enthusiasm. CAFNR is a great place to be; I would not change my major for anything in the world.”

In addition, the Ag Alumni Association recognized Bill Buckner as one of the 2013 Citation of Merit Award winners at the Steak Fry. 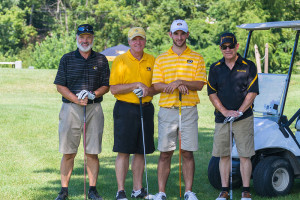 The Mizzou Ag Alumni Association would like to thank all of the generous sponsors and golf participants who helped make this a successful fundraising event.

See more images from the event at CAFNR’s Flickr site.