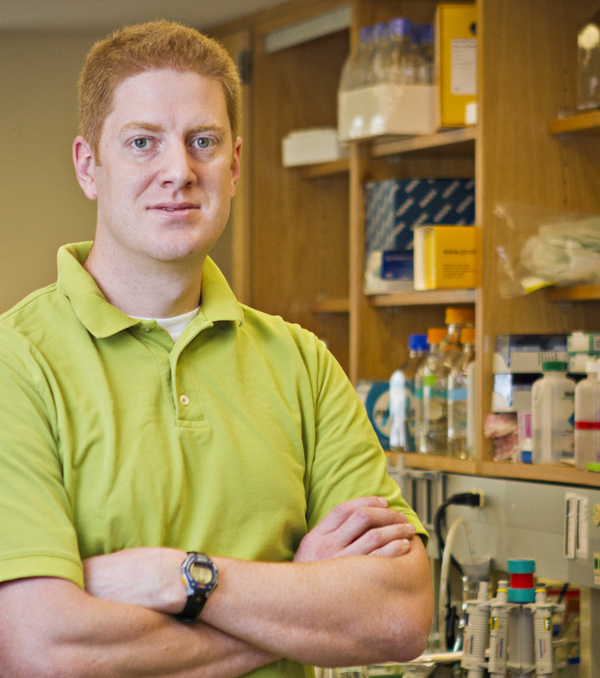 Peter Cornish, assistant professor of Biochemistry, was featured in the July issue of The Scientist magazine as a “Scientist to Watch.”  The headline called the 35-year-old Cornish the Ribosome Cowboy.

The Scientist is one of the most respected professional magazines intended for life scientists. Coverage includes reviews of widely noticed research papers and current research themes, updates to technology, career information, profiles of scientists achieving notoriety, and reports of interest to its audience.

The Scientist said Cornish has always excelled at scientific research, be it his elementary school science project investigating which types of molecules give substances their smells or his work today.

The magazine noted that at Texas A&M University, Cornish studied how ribosomes translate mRNA into proteins, focusing his graduate work on frameshifting, a process that allows many viruses, including HIV, to make the ribosome skip nucleotides during translation and optimize the levels of viral proteins produced. Cornish used nuclear magnetic resonance (NMR) spectroscopy to characterize the atomic structure and chemical properties of pseudoknots, structures in mRNA that cause ribosomes to frameshift and bypass “stop” codons.

In 2010, Cornish started a lab at the University of Missouri where he is bringing his graduate school and postdoctoral research together, applying single-molecule fluorescence resonance energy transfer (FRET) to explore how the ribosome interacts with RNA during frameshifting. He is also screening compounds that could target and disable virus-mediated frameshifting.

The magazine noted that in 2012, Cornish won a CAREER Award from the National Science Foundation that funds two graduate students for 5 years. The same year he was selected as a Pew Scholar, which comes with a grant of just under a quarter of a million dollars.