Agriculture typically brings to mind corn, soybeans and cattle. But research at the University of Missouri could make seafood a major cash crop in the Show-Me State. David Brune, a professor of agricultural systems management in the College of Agriculture, Food and Natural Resources, is developing a seafood production system that is sustainable, scalable and environmentally friendly.

At MU’s Bradford Research Center near Columbia, Brune is raising saltwater shrimp in a greenhouse. The facility holds about one-twentieth an acre of water and is fully stocked with Pacific white shrimp. 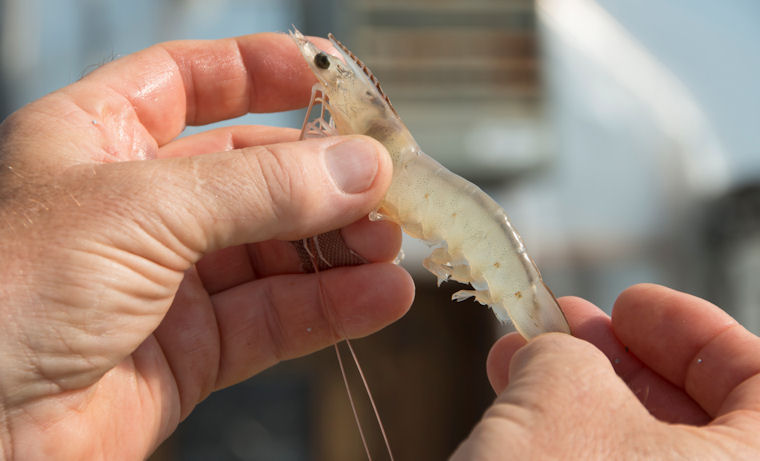 Why shrimp? Brune says shrimp is a valuable product that can be produced in a short period.

It costs Brune about $3 a pound to produce the shrimp, so for Missouri shrimp to be economically feasible, it will cost shoppers a bit more than typical supermarket shrimp. But Brune estimates many U.S. consumers would willingly pay a premium price for locally grown, higher quality and sustainably produced shrimp.

Brune, who is also an MU Extension specialist, says seafood eaten today is completely unsustainable. Expanding or even simply sustaining the seafood business will require aquaculture.

“We’re overfishing the world’s oceans in almost every species,” he says. “Nearly all of the aquaculture that is being done internationally is itself unsustainable. Most shrimp are grown in China, Indonesia and Thailand, where producers feed wild-caught fish meal and are discharging waste from their ponds into Asian coastal waters.”

The system that Brune has developed uses algae to control water quality by providing oxygen and removing carbon dioxide and ammonia. Paddle wheels keep the water moving for greater photosynthesis of the algae. That productivity makes it possible to maintain water quality while stocking shrimp at a high density.

Excess algae can also be put to good use.

“You can’t keep growing algae forever in a closed system, so we harvest the algae using brine shrimp,” Brune says. 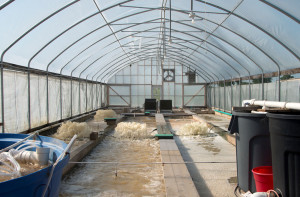 This saltwater seafood system at the MU Bradford Research Center is housed inside a greenhouse to prevent rain from diluting the saltwater.

There are ultimately four byproducts of harvested algae: feed, fuel, methane and fertilizer. The brine shrimp mass can be used as a fish meal replacement to feed the Pacific white shrimp. About 20 percent of brine shrimp is oil that can easily be harvested and converted into a liquid fuel. Waste products from the brine shrimp can go into a digester to produce methane to power the physical system, and the effluent that comes off the digester will contain high levels of nitrogen and phosphorus, which can be used as fertilizer.

“We know that we can grow shrimp and provide seafood in a sustainable manner, in an environmentally compatible way, in a way that has zero discharge,” Brune says. “That doesn’t mean anything to anyone unless we do it cost effectively. So after I make this a technical success, I’ve got to make it so farmers can afford to do this and make a living at it. That is the final objective.”