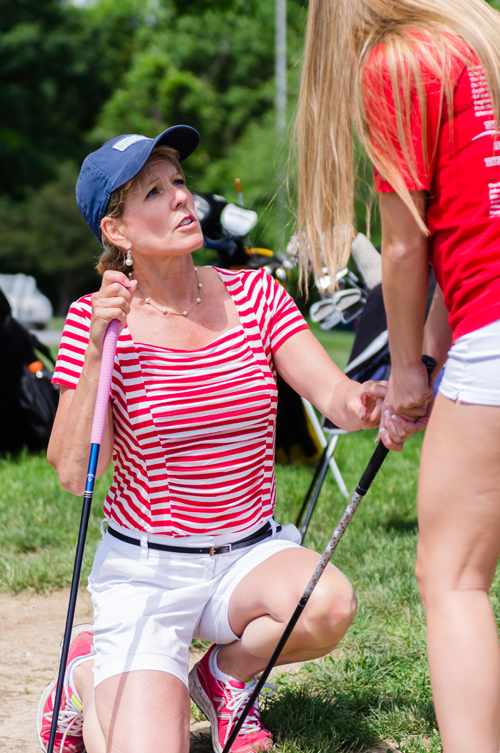 Linda Sowers has been playing golf since she was a teenager. She introduces the sport, and its business relationship opportunities, to students at MU.

“I love the game so much, I would rather golf than eat.”

Linda Sowers, instructor of agricultural journalism and agriculture and applied economics, has been playing golf since she was a teenager. She instructs the Ag Econ Business Golf Etiquette class, the only golf etiquette class offered at MU.

As an ag economics graduate, former member and captain of the MU women’s golf team, and former head coach of the University of Tennessee women’s golf team, Sowers contributes technical teaching knowledge. Her previous business background working for DowAgroSciences and an advertising agency allowed her many business golf opportunities.

Sowers grew up in Rolla with two brothers. Having the brothers heavily influenced her involvement in sports because she was always trying to “keep up.”

“One of my father’s best friends was Ken Lanning, one of the best golfers in the state,” Sowers said. “He was hosting a junior tournament and I was there to watch. He gave me a set of golf clubs and told me to go out there and play too. I scored a 62 my first time golfing nine holes.”

Lanning is a member of the Missouri Golf Hall of Fame. Golf Digest presented him with the No. 1 award for contribution to Junior Golf.  Sowers also gives her parents much credit for the development of her skills.

“My parents were great,” Sowers said. “My mom drove us to tournaments and allowed my brother and me to develop our skills.”

When Sowers attended high school in Rolla, they did not have a girls’ golf team, but she tried out and made the boys’ team. During high school, MU’s golf coach Diane Lyon saw Sowers playing at a tournament in Columbia called her parents and asked her to play for MU. Sowers accepted and headed to Columbia to play golf on a scholarship.

“Playing at MU was one of the best experiences of my life,” Sowers said. “I had never been on a plane before, until a tournament at Chapel Hill, N.C. The competition and my teammates were awesome. I learned so much about failure. Golf taught me you’re only as good or as bad as your last tournament.  You have to prove yourself each outing.  The business world is certainly that way.  Some days are diamonds, some days are stones. ” 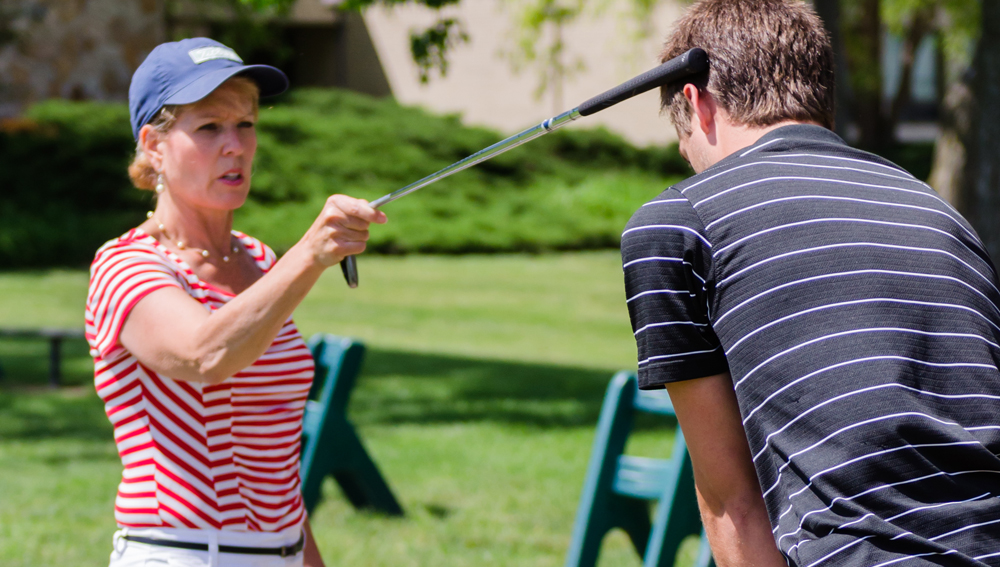 A Career in Marketing and Golf

While at MU, Sowers received her B.S. in ag economics. After graduation, Sowers worked at DowAgroSciences, then a marketing company. Sowers continued using her golf skills in the business world.

“When I started working at Dow, there were very few women in the ag business world,” Sowers said. “Sometimes it was hard to break that barrier of men not wanting to have a female as a salesperson. A golf outing with a group of customers was a great way to get to know one another in a relaxed setting. My golf abilities allowed me to entertain customers and get to know them. I would host a golf tournament for one of my biggest customers every year. The Dow Chemical national sales meeting was hosted at a golf resort each year I was with the company. One year I played with the national sales manager. You can’t put a price on any of those experiences and developing those relationships with colleagues.”

A former teammate from MU and Dartmouth women’s golf team coach, Kim Erickson, had been trying to persuade Sowers to coach golf because of the rewarding feeling. When the University of Tennessee started a women’s golf program, Erickson recommended Sowers. Sowers got the job.

“Tennessee likes to win,” Sowers said. “The program was just starting, so it was long hours and hard work. I was flying all over the country, and calling internationally, to recruit players. I was still in sales though; I was selling the University of Tennessee.”

The University of Tennessee women’s golf team was ranked 13th in the nation after its second year of existence. 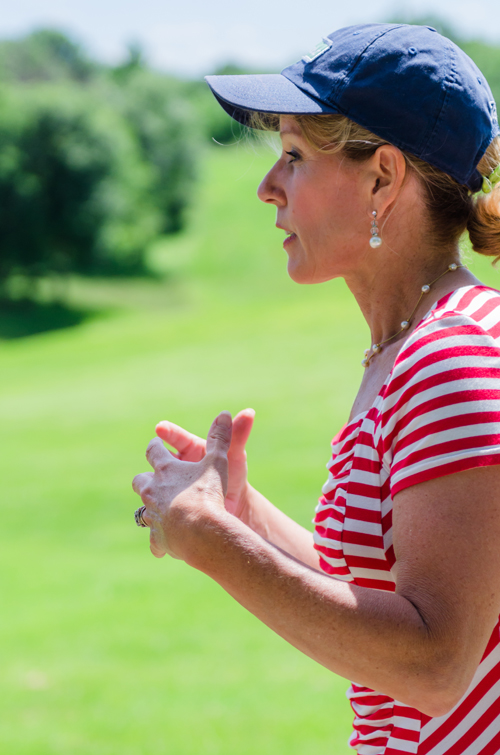 After four years of coaching, Sowers was exhausted from her demanding coaching schedule. She came back to Missouri in 1996 and worked as the director of advancement for CAFNR for six years. In 1999, Mike Monson, professor of agricultural and applied economics, and Hardeep Bhullar, associate professor emeritus of parks, recreation and tourism, created the Business Golf Etiquette course.  In 2001, the pair recruited Linda Sowers as an instructor.

“There is nothing more rewarding than seeing a student who has never even hit a golf ball, make contact and sail the ball down the fairway,” Sowers said. “Their eyes light up when they realize they can do it. We [Sowers, Monson and Bhullar] hope all students get bitten by the golf bug like we have.”

Students require no previous experience to take the course and it’s limited to around 26 seniors. CAFNR students get first priority. Students from every college at MU have taken the course.

The objective of the course, according to the course syllabus, is for both the novice and experienced golf players to understand the principles and practices that characterize the complex rules of behavior surrounding business golf. Students will be expected to become familiar with the basic rules of golf, equipment, and etiquette so that they may appropriately represent their employer. After taking the course, the student will have the etiquette skills to confidently play a round of golf with the most experienced of players and feel comfortable. They shouldn’t miss a business opportunity whether networking or closing a sale because they could not join a foursome.

“I hear back from alumni that took the course and tell me how useful it was,” Sowers said. “It has helped them build relationships with colleagues within their companies and customers.”

Sowers doesn’t golf as much today. Her children, Olivia, 12, and Stephen, 15, have also taken up golf. She spends her time coaching, motivating and encouraging her children.

“I want to stress how important it is for women, as well as men, to take this course,” Sowers said. “Women will have the same opportunities in the business world to be out on the course. They should learn the etiquette so they too can go out and build relationships.” 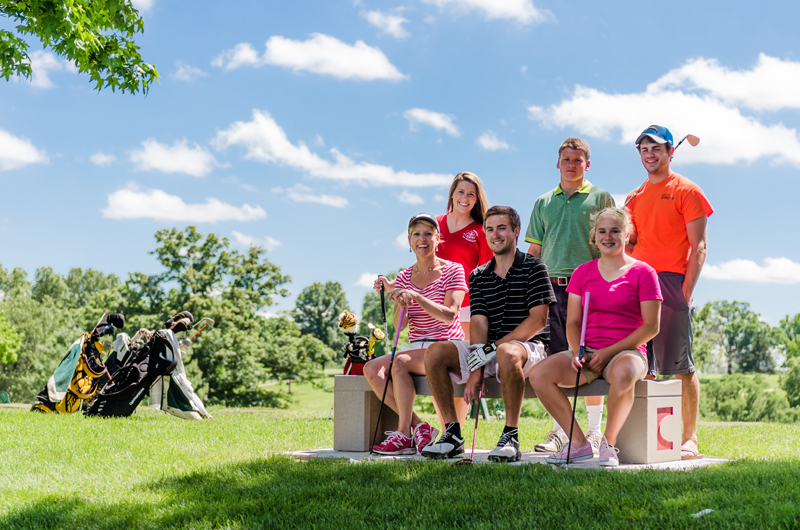