When Roger Mitchell, the former dean of the MU College of Agriculture, Food and Natural Resources, spoke of himself, it was often in terms of his collaboration with others. His vision did not see him dramatically leading an important organization. He wanted to make good things happen by being a coach, teaching and encouraging others. 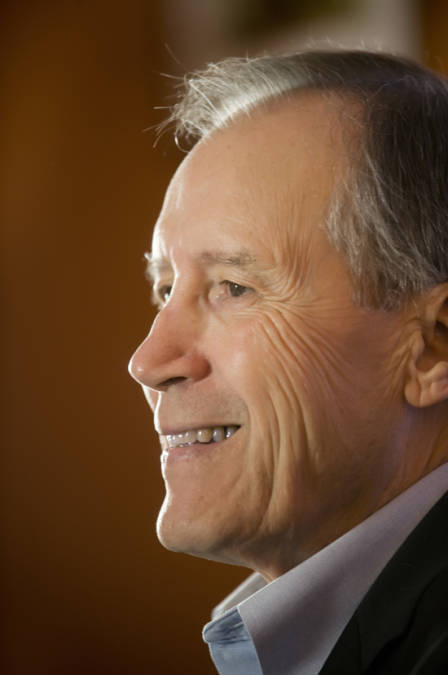 “Roger Mitchell was a man I respected and admired,” said Tom Payne, vice chancellor and CAFNR dean. “He was my colleague and friend, and played an important role in my following him here in CAFNR. Roger was a ‘Dean’s Dean.’ He blended dignity, charm, character and intelligence with a genuine concern for everyone he met. His was a life devoted to making good things happen – from great concepts like the Bond Life Sciences Center, and development of the exceptional collaborative program Food for the 21st Century – to a helpful word to a person struggling with a problem. This College and University benefitted greatly from his presence. We are blessed that he will always be with us through all he did and the fantastic memories.”

Mitchell believed in communication, his faculty members remembered. Because he valued the opinions of others and wanted them to be informed, he shared information with his MU team and colleagues through weekly Monday meetings.

Colleagues said Mitchell never forgot a face. “If you ever met the Dean, he remembered your name. He has a steel trap for a mind and made people feel so good because ‘the Dean knows who I am.’ That’s a great attribute,” said Tony Rickard, Extension Dairy Specialist.

It seemed as though Mitchell knew everybody. He understood it was important for the Dean of Agriculture to get out among Missourians and show MU’s interest in them.

Mitchell hadn’t planned on an administrative career, or even one in academia. Growing up in rural Grinnell, Iowa in the 1940s, Mitchell assumed he would take over the 120-acre family farm. In his own way, Mitchell did follow a dream, not by becoming a gentleman farmer, but in the role of gentleman dean.

From Farm to Academia

Mitchell was born on a farm near Grinnell, an agricultural community east of Des Moines. His early life was that of “farm kid,” as he said, attending 4-H meetings and showing Sue, a Guernsey heifer, in county and state fairs. There was no doubt then in his mind that his goal was to be a gentleman farmer, being a faithful member of the community and good steward of the land. 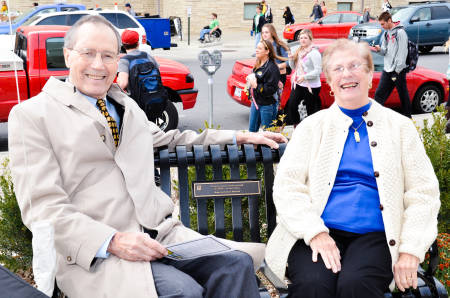 Mitchell met his future wife Joyce at Iowa State University, where he studied agronomy and crop physiology, and she majored in home economics. His freshman year was so traumatic for the young man, who missed home so much, that he would hitchhike the 70 miles back to Grinnell on most weekends.

But as his studies progressed, something in higher education began to shift his interests. As he acquired new knowledge, sometimes just for the joy of learning, he began taking on leadership responsibilities in student organizations. While other students dreaded coming to the blackboard to demonstrate an assignment, Mitchell loved it. During his junior year, he asked an associate dean what he needed to do to become a dean. “Get a Ph.D. and see if anybody wants you,” was the response.

Mitchell did just that. His doctoral thesis was in crop physiology.

Becoming a Professor, Not a Farmer

Mitchell not only fell in love with the academic life at Iowa State, he loved working with students. His first job was as an agronomy instructor. Before he left Iowa as professor in 1969, he had acquired an astonishing 80 to 90 advisees. 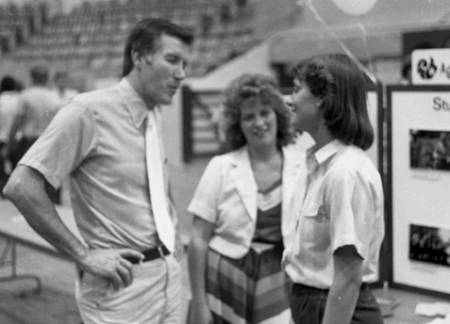 While directing Iowa State’s farm-operation curriculum, Mitchell didn’t just have office appointments with students, he visited them on their farms and gave them advice that only a fellow farmer could provide. Parents were awed by the attention. Iowa State students voted him 1962 Professor of the Year.

A 1966-1967 American Council on Education administrative fellowship at the University of California-Irvine gave him insight into a new aspect of education. He returned to Iowa with the intention of being “a full-time professor the rest of my life,” but that didn’t stick, he said.

In 1969, Mitchell accepted a position at Mizzou as a Professor and Chair of the Department of Agronomy. Eight years later he was named Dean of Extension. After serving as Vice President of Agriculture at Kansas State University and later as director of the Mid-America International Agricultural Consortium, Mitchell returned to MU to stay. His reappointment to the Chair of Agronomy was followed by the CAFNR deanship in 1983. 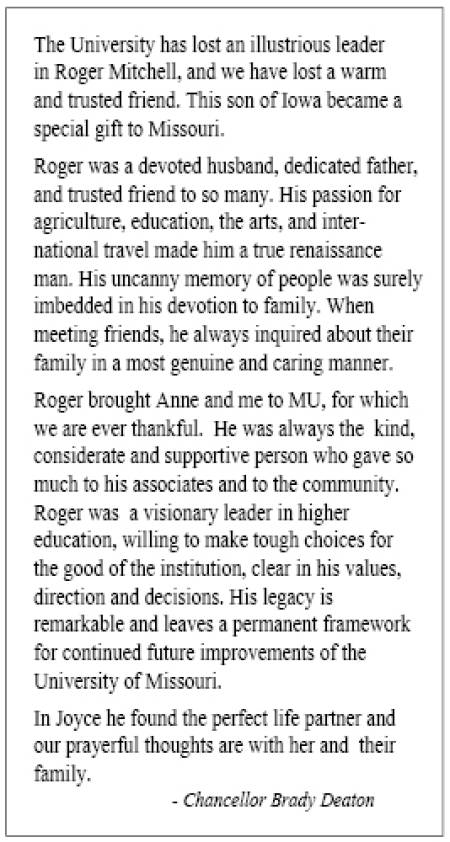 Even as Dean, Mitchell craved contact with students. When the Associate Dean position opened, he added those responsibilities to his own workload and happily served as student adviser for two years.

In typical Mitchell fashion, he would write contracts with the students to teach goal setting, a strategy especially helpful for those struggling to make good grades.

Changing a College During Changing Times

Mitchell’s professional career occurred during some of the most dramatic changes in America’s culture – the ‘60s and ‘70s. Rather than try to block these influences, he embraced the best of them.

One of these changes was the increasing enrollment of women in the sciences. Few women were enrolled in classes when Mitchell was teaching in the late 1950s and early 1960s, but 10 years later they were a major presence. It just seemed appropriate, he said, that a father of four daughters would ensure a smooth transition.

“It just seemed normal,” he said. “Faculty adapted to the idea of more women in the classroom and welcomed the new students. They found it invigorating to have men and women in their classes,” Mitchell said.

Quickly, women not only filled more than half the classrooms, they moved into leadership roles in clubs and associations such as FFA and agricultural journalism. 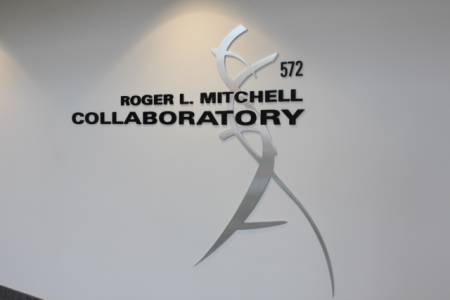 Mitchell’s emphasis on collaboration was recently recognized by a unique conference room in the Bond Life Sciences Center.

No one person can take credit for starting MU’s Food for the 21st Century program, but Mitchell’s role was large. With a $180,000 grant of alumni donations, Chancellor Barbara Uehling charged him with leadership of the project conceptualized by former Dean Max Lennon.

Mitchell was tenacious in seeking support and explaining the value of collaborative research. He had acquired extensive reinforcement for the idea of interdisciplinary teams through years of service on the Board on Agriculture in the National Research Council of the U.S. National Academies.

“I had so much fun trying to set the stage,” he said.

Food for the 21st Century would become a collaboration among four colleges and a top priority for the UM System and the state. The program focused on Missouri’s agricultural strengths and advanced the idea of research and biotechnology.

In 1984, Mitchell received an endorsement from then-Gov. Kit Bond and an appropriation of $460,000 from the Missouri legislature for the program, which Bond considered important to rural people during a difficult time for agriculture. The center opened in 2004.

Mitchell was determined to not make such important decisions in the vacuum of an administrative suite. He shared the cold, hard facts and asked faculty members to participate in discussions. He recalled sitting for hours listening to impassioned faculty pleas, knowing later he would have to disappoint some with his choice of what was best for the College. 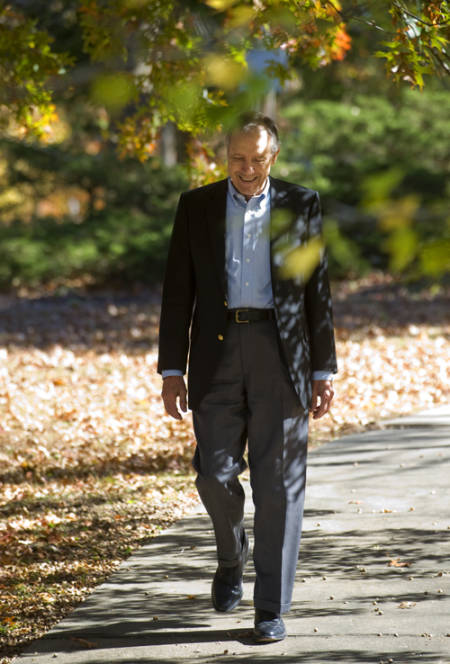 Despite money problems, Mitchell would not let the College fail to progress. He saw that the major components of the College – plant sciences, animal sciences, the social sciences and the environmental concerns – could not solve the challenges of the 21st century as stand-alone disciplines. They could be stronger as a collaborative, interdisciplinary force.

Typically, he sought input from alumni and faculty for the best course and for assurance that the new name more accurately reflected the expanded curriculum.

In a more challenging issue, Mitchell had to undertake restructuring of the college from 17 departments to six divisions. The change affected alignments of units that had been cherished by departments for decades, but the need for greater flexibility helped shape the current structure. Mitchell sold the idea.

Mitchell was proud of how the faculty embraced the change; they never knew how many hours he agonized over the final decisions.

Roger and Joyce Mitchell didn’t just encourage strong professional collaboration, they saw their colleagues as part of an extended family. To this, entertaining was one of the “blossoms” of a deanship, Mitchell said.

Inviting guests to their home was a joy for the couple. Although Joyce worked full time in marketing with the University Concert Series, she took time to prepare homemade meals for guests and to help fuss over students and international visitors.

Sometimes the snags made entertaining all the more memorable, as on the evening of a holiday open house. With 200 guests expected, Mitchell complicated the event by lighting the family room fireplace but forgetting to open the damper.

The Mitchells laughed, too, about early snafus with e-mail listservs, which the dean’s office would use to send as many as 800 invitations (with different arrival times) for a gathering at their home. Inevitably, some guests would send replies to the entire list.

A Life Devoted to Service and Education

If Mitchell’s dad were disappointed that his son didn’t stay with the farm as it grew to a 340-acre operation, he didn’t mention it. He understood his son had a different calling.