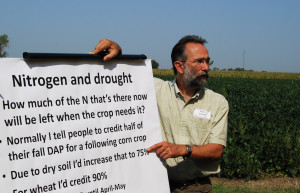 Planting is the most important activity for any farmer. As farmers sow their seeds between this year’s spring rains, CAFNR Professor Peter Scharf wants them to consider just how critical their soil is — not just for this year’s harvest, but for sustaining harvests for future generations of farmers.

Scharf has good reason to be concerned. In 150 years of farming in northern Missouri, nearly half of the topsoil has eroded. Recent tillage and conservation practices have slowed the erosion rate, but more needs to be done.

Scharf recommends two critical practices to help limit erosion: manage residue to keep as much protection on the soil as possible, and plant cover crops.

“If we do these things we can get to a place where we take care of the erosion problem and get to where our soil becomes a long-term sustainable resource over many centuries,” Scharf said. “We’re really the first civilization to have the option of no-till agriculture, and use of cover crops to sustain the soil.”

Climatological data shows big, three-inch-plus rainfalls are happening twice to three times as often as they were 50 years ago. “The potential for massive losses of topsoil is much greater than it was when your grandparents or parents farmed,” Scharf said. 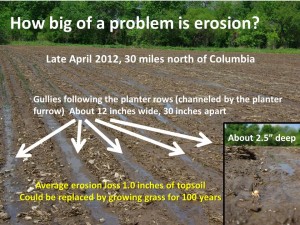 In a single event, such as a one-inch erosion event Scharf documented on April 29 in 2012, a farmer could lose $16 per acre, per year. However, if that same farmer had a cover crop, he would have significantly reduced or mitigated the erosion. That would save in productivity the cost of cover cropping for the rest of his career, Scharf said.

Big rainfalls are not the only threat to Missouri’s soils. “One of the insidious, dangerous things about erosion is you lose three hundredths of an inch here or six hundredths of an inch there,” Scharf said. “Lots of our erosion over the last 150 years has happened that way. You can go a lifetime of farming and by the time you’re done you can tell that things are different, but by that time it’s too late.”

“Have some appreciation for your soil, and how vulnerable it is,” Scharf commented. “Consider planting a cover crop this fall; consider how important your tillage management is in maintaining your soil. Consider that if you lose an inch of topsoil it will take nearly 100 years of growing grass to replace that topsoil. What does that mean for future generations? If we keep going at this pace there isn’t going to be any topsoil left.”

Researchers at CAFNR are investigating several cropping systems to mitigate erosion and enhancing productivity. Farmers can learn about recent cover crop research at Bradford Research Center on May 17 from 1-4 p.m. Tim Reinbott, superintendent of the center, along with other MU faculty, will demonstrate six different types of closing wheels and planters that can be used in planting into a heavy cover crop residue.

They’ll also discuss how the cover crops were established and the successes and challenges that they had in 2012 and 2013.