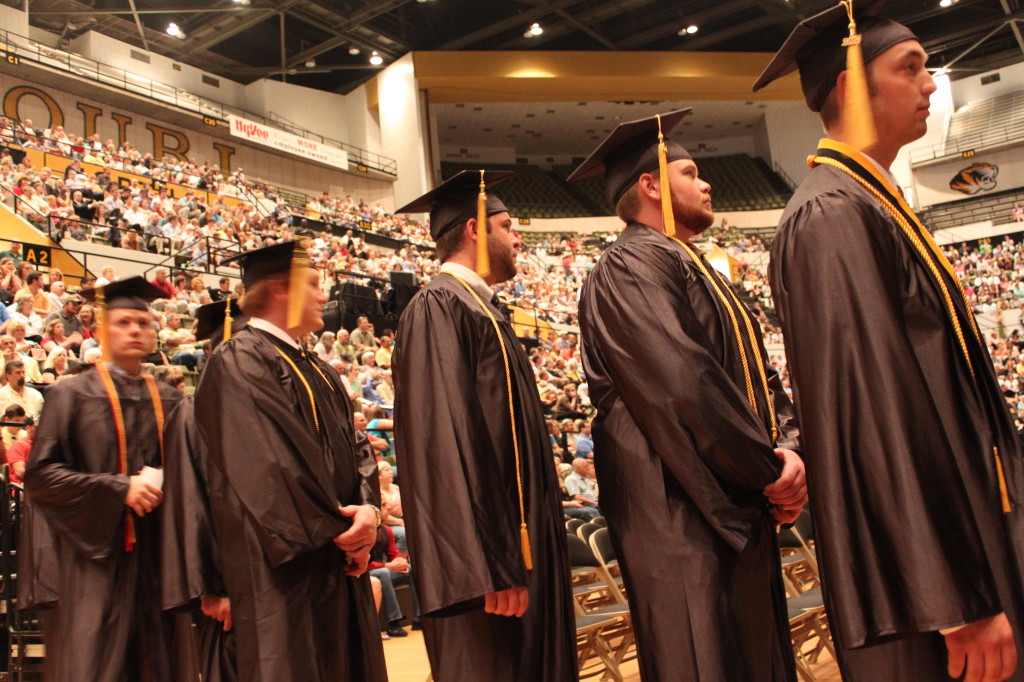 Students wait in line to cross the stage, receive their diplomas, and become alumni of the College.

The commencement for the University of Missouri College of Agriculture, Food and Natural Resources was held May 18 in the Hearnes Center. U.S. Senator Roy Blunt was the commencement speaker for the event.

The commencement speaker for the MU School of Natural Resources was Roger Still, former Missouri state director of The Nature Conservancy and former Vice President of National Audubon Society. SNR’s ceremony also was held May 18, in Jesse Auditorium.

Sen. Blunt spoke to the graduating class about the advancement and importance of agriculture.

“You will always remember this day, and who helped you get here,” Sen. Blunt said. “Agriculture is such a big umbrella. It is amazing what we do now, and what we will need to do to prepare for advances in the future.”

Before serving in Congress, he was a history teacher, a county official, and in 1984 became the first Republican elected as Missouri’s Secretary of State in more than 50 years. Sen. Blunt also served four years as the president of his alma mater, Southwest Baptist University in Bolivar, Mo.

While serving with The National Audubon Society, Still was directly involved in the planning, stakeholder engagement and fundraising efforts that brought two nature centers to Missouri; one in St. Louis and the other in Joplin. He led Audubon’s Mississippi River Initiative, a program focused on conservation of the Mississippi watershed and its threatened bird species.

Prior to his conservation career, Still worked for three years as a Russian political analyst at the Central Intelligence Agency, in Washington, D.C. He holds a bachelor’s degree in political science and a master’s degree in history from the University of Missouri.

CAFNR May 2013 Commencement from Academic Support Center on Vimeo.

The Outstanding CAFNR Senior for the spring class of 2013 was presented to Marie Inglish. Inglish is from California, Mo., and received her B.S. in Agribusiness Management.  Her nominating organization was the Agricultural Economics Club.

“Marie has excelled in her coursework and participates in numerous activities,” said Kody Raines, CAFNR Student Council president and award presenter. “She has received Dean’s List honors every semester while enrolled at the university, which reflects upon her academic achievements.  Marie has served as President of the Agricultural Economics Club, and accredited to her leadership, this organization received the Outstanding Club Award this year. Marie is a John Brown Scholar, Dickinson Scholar, CAFNR Week Queen Finalist, and an avid volunteer.  She has interned for CAFNR Ag Alumni Association, Missouri Pork Association, and studied abroad in the Czech Republic.  Peers described Marie as ‘dedicated, innovative, and genuine.’“

CAFNR was established in 1870. It has the highest sponsored research expenditures on the MU campus. The college is ranked among the top 15 programs in the world for animal and plant science research, according to Thomson Reuters.

Since 1989, SNR has been housed within CAFNR. Some of SNR’s programs originated up to 80 years ago. It is the Midwest’s only school with a comprehensive natural resources program, encompassing atmospheric science, fisheries, forestry, parks, recreation, soils, tourism and wildlife. 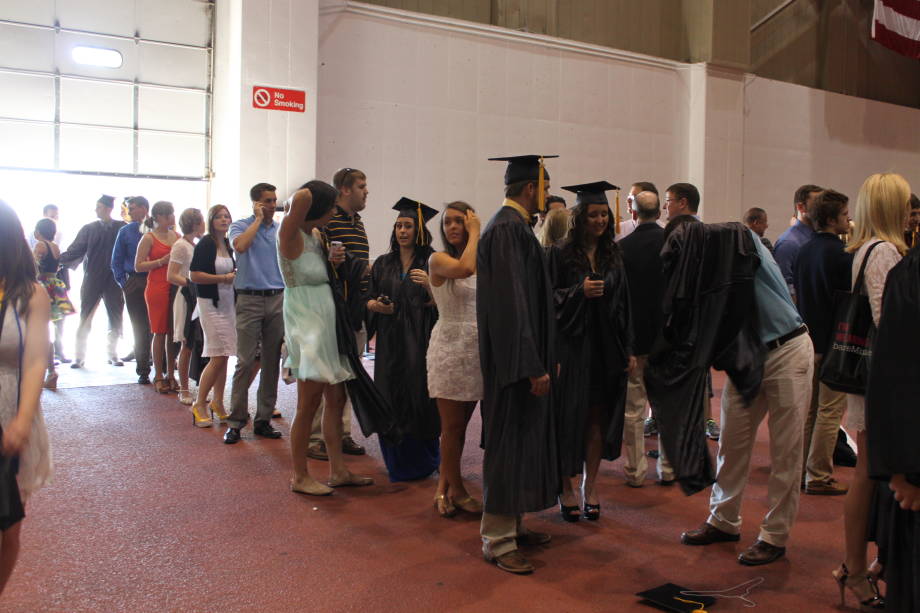 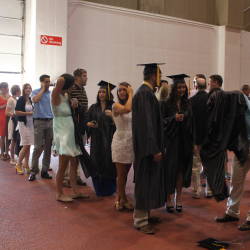 Students line up in the Hearnes Center to check in. 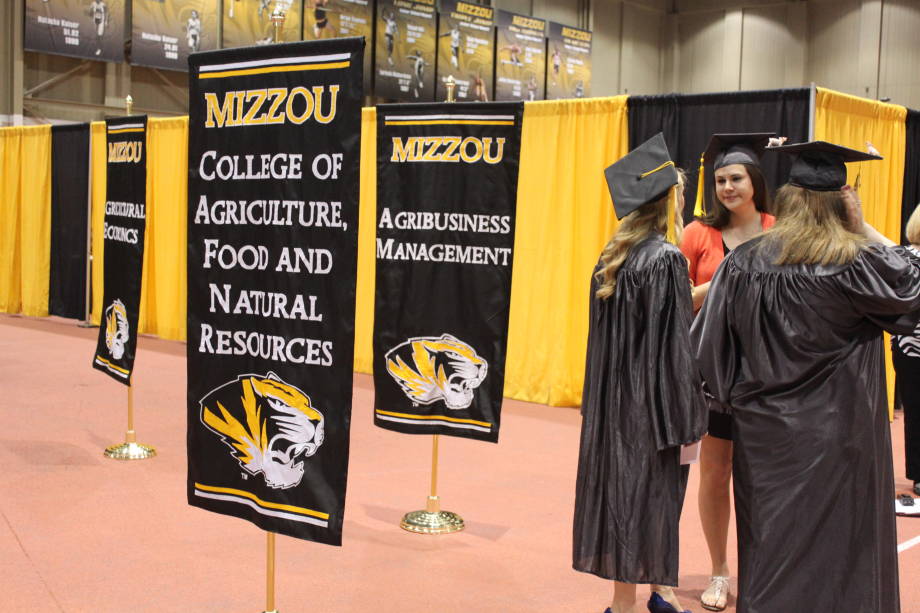 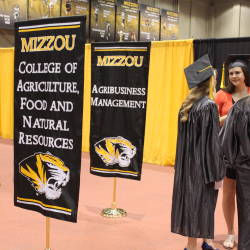 Students await commencement by their banners. 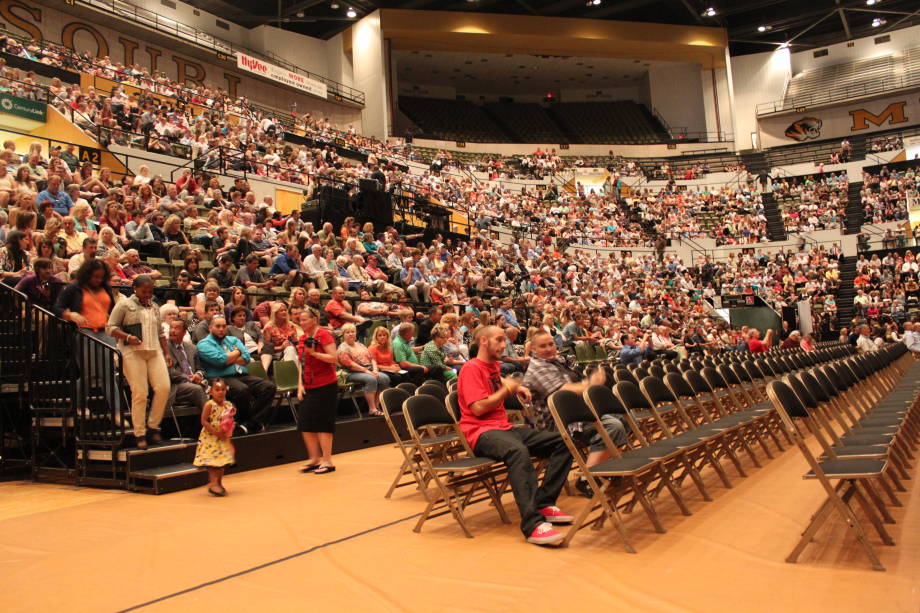 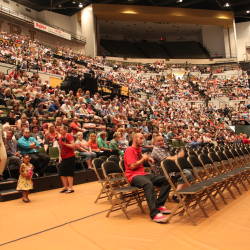 Friends and family of graduates filled the Hearnes Center. 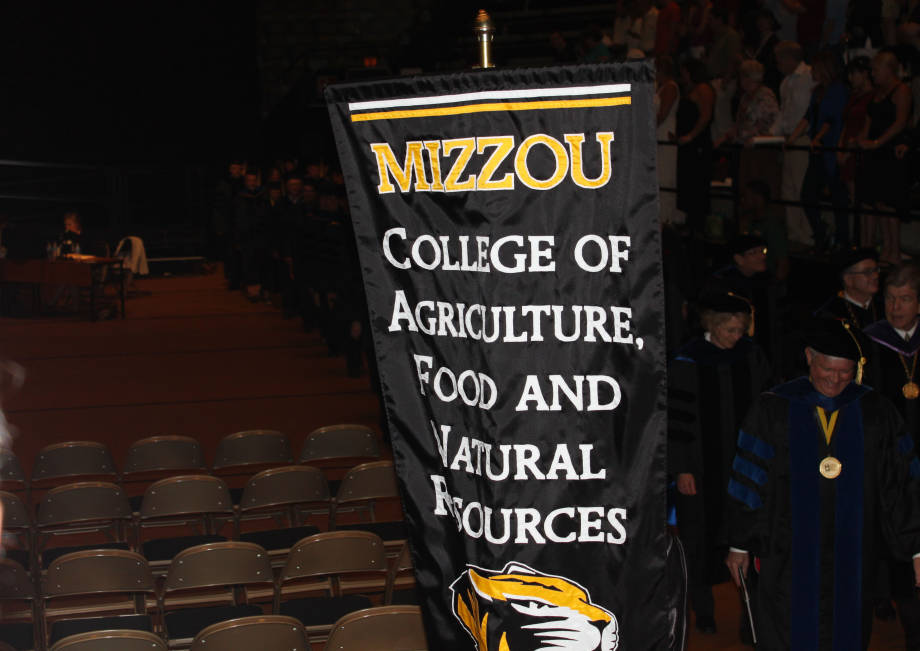 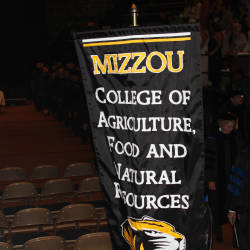 The commencement procession led by the College of Agriculture, Food and Natural Resources banner. 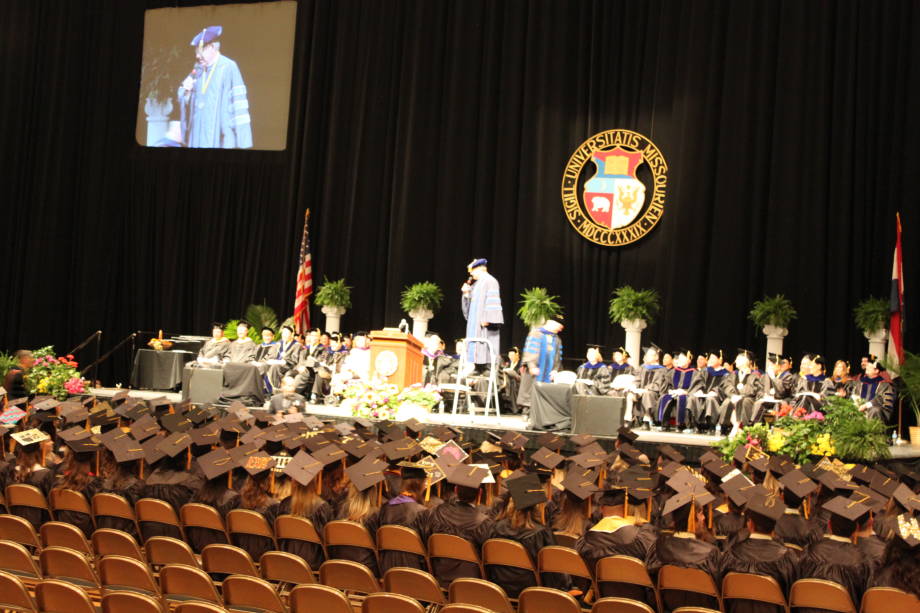 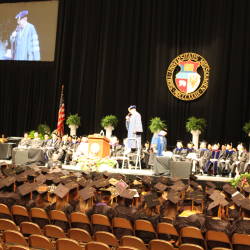 Dean Tom Payne stands on a step stool to lead the MIZ-ZOU chant during commencement. 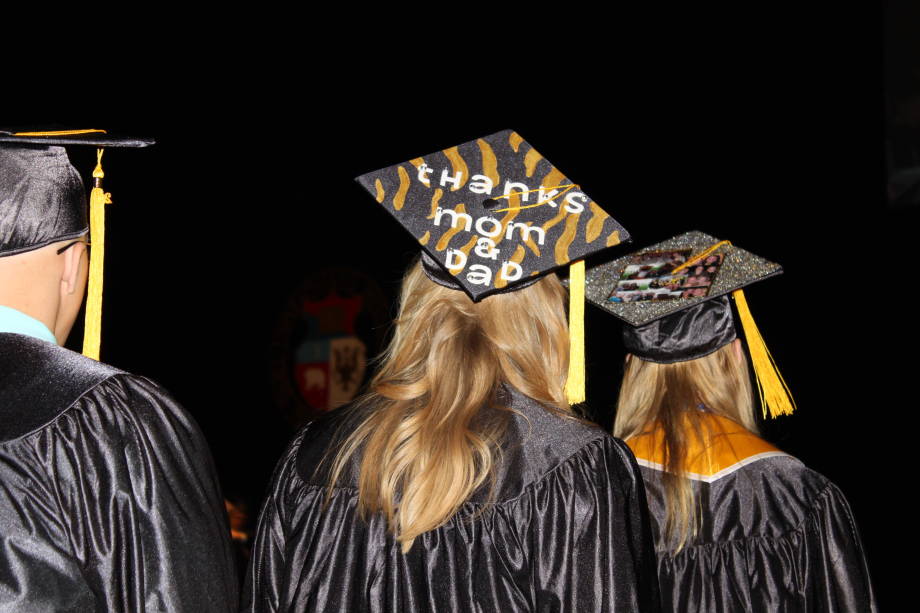 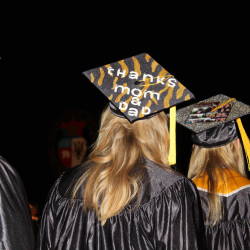 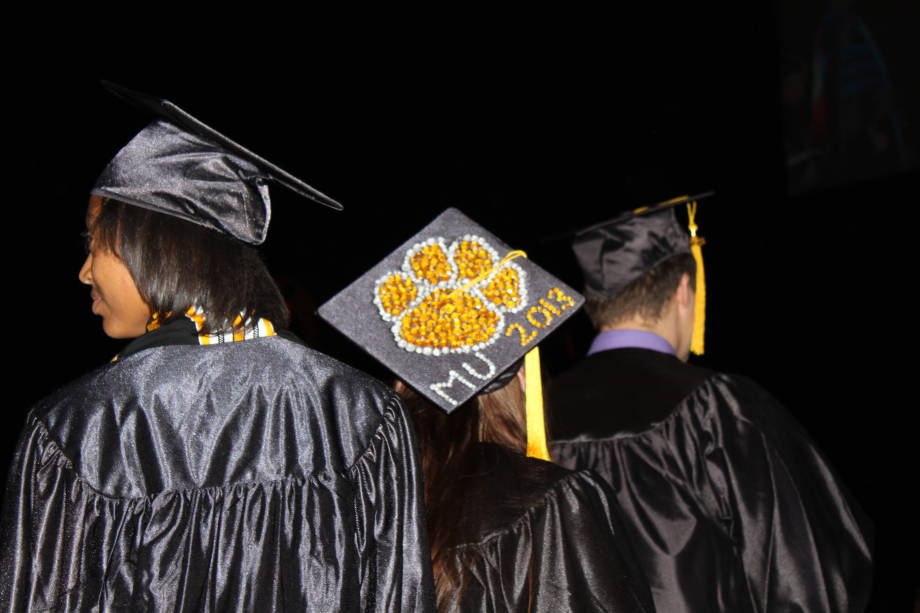 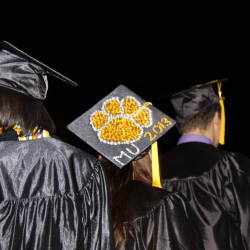 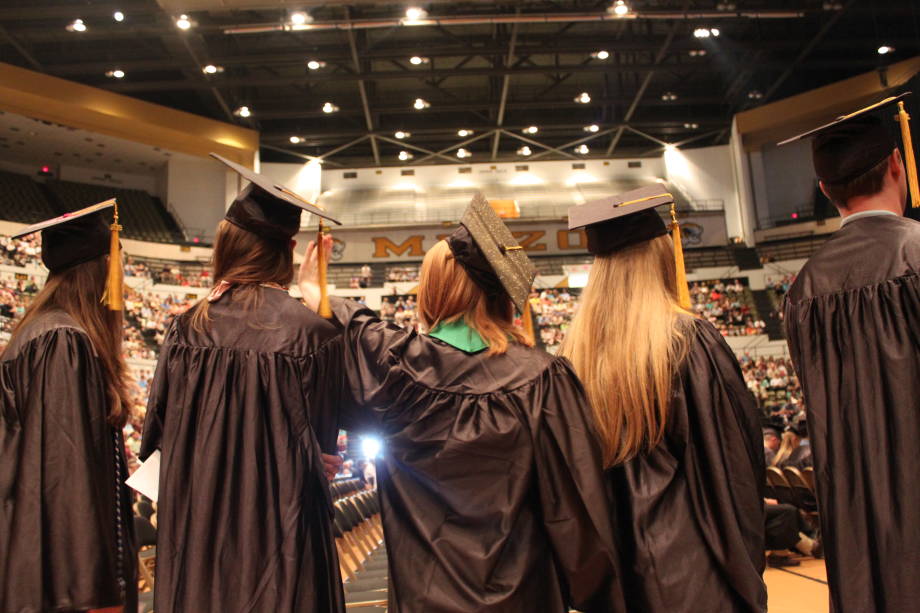 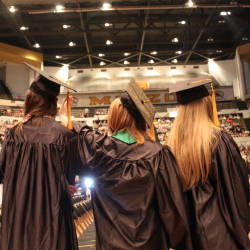 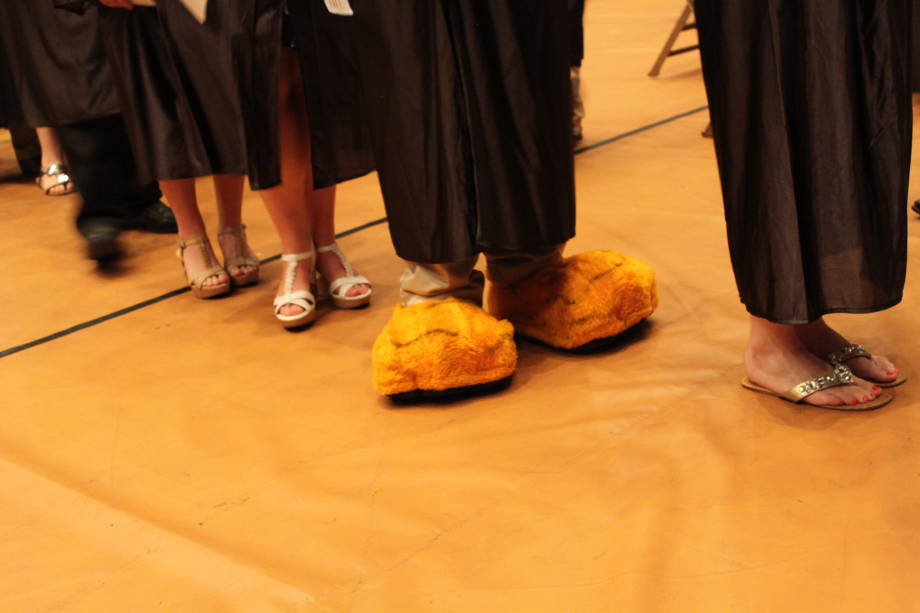 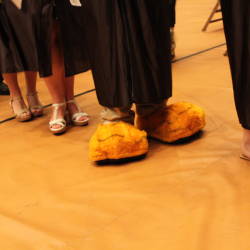