Jennifer Upah, teaching assistant and director of internships in the parks, recreation and tourism department of the College of Agriculture, Food and Natural Resources, was selected for a 2012-2013 Young Professional Fellowship from the National Recreation and Parks Association (NRPA).

Recipients attended the National Recreation and Parks Association Congress and Exposition in October and Legislation Forum in Washington, D.C., March 18-21. 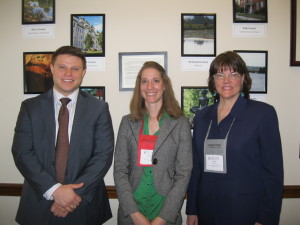 The Young Professional Fellowship’s primary focus is to inspire future participation and leadership in NRPA and to develop professional contacts with NRPA leadership. The program provides recipients with a mentor from leadership as they explore the operation of NRPA and its governing bodies at the annual Congress and Exposition. The Young Professional Fellowship provides additional mentorship at the NRPA National Legislative Forum on Parks and Recreation and throughout the year.

Upah and three other recipients received travel funding for the Annual Congress and Exposition and the Legislative Forum. While she was at the forum, Upah lobbied on key issues facing the NRPA. The Land Water Conservation Fund was the only bill up for renewal, but there were many other issues in need of funding. Upah talked to Missouri senators and representatives to lobby. NRPA provided education of these issues to all members in Washington, D.C., who came to lobby.

“It was a good time and a great opportunity to network,” Upah said. “It is always interesting to interact with decision makers and hear their points on the issues.”

Upah is originally from Iowa. She received her B.A. in leisure, youth and human performance from the University of Northern Iowa in 2003. After graduating, she worked for U.S. Naval Air Station within the Morale, Welfare and Recreation division. Next, she took a job at a YMCA in South Dakota as the aquatics director. Upah then attended the University of Houston, where she was a graduate assistant of aquatics and safety. She received her M.S. in sports and fitness in 2006. After receiving her M.S., Upah worked as the aquatics director at the University of Houston for three years. In 2009, an open position in the parks, recreation and tourism department brought Upah to MU. Along with being a teaching assistant and director of internships, Upah is a student in the agricultural education graduate program. She is expected to receive her degree in December 2015.

NRPA is the leading advocacy organization dedicated to the advancement of public parks, recreation and conservation opportunities. NRPA is funded through membership dues, grants, conference and charitable contributions. These funds are used for research, education and policy initiatives on behalf of the movement. NRPA introduced legislation to fund urban parks and is a strong supporter of state side Land and Water Conservation Fund.