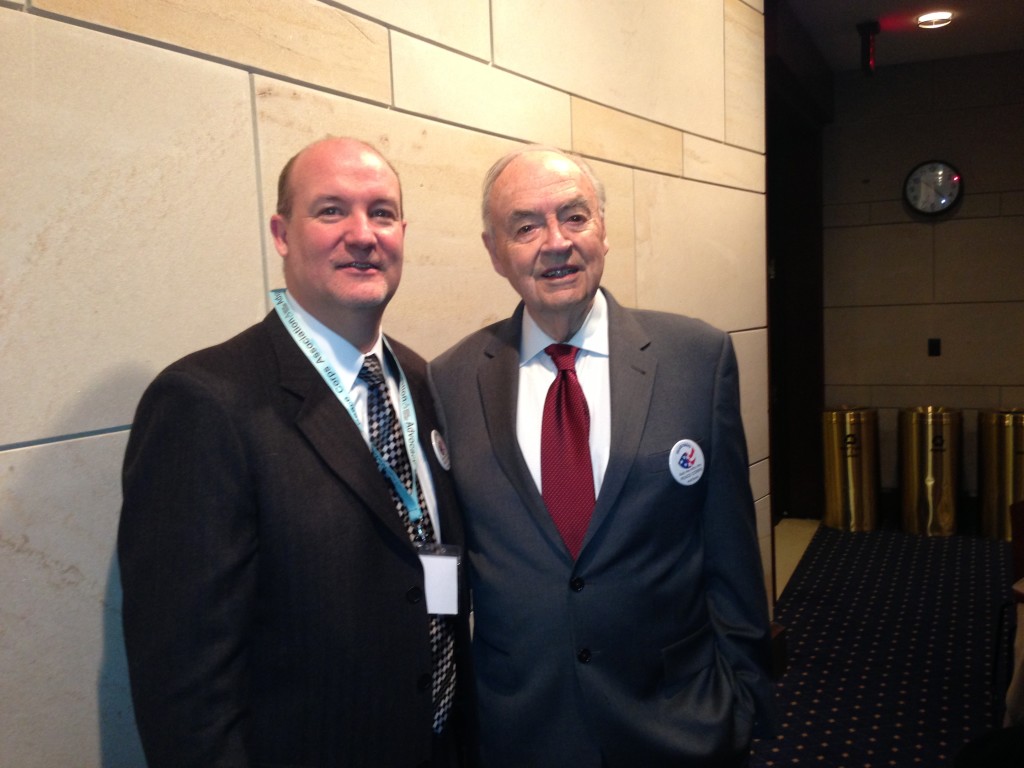 Blumhorst, left, with former Sen. Harris Wofford, who was instrumental in the establishment of the Peace Corps.

CAFNR Alumnus Glenn Blumhorst, B.S. Ag ’85 and MPA ’87 has been chosen as president and CEO of the National Peace Corps Association (NPCA).

NPCA is a national organization based in Washington, D.C. for those influenced by the Peace Corps experience, whose mission is “to connect and champion Peace Corps community members in ‘bringing the world home.’”

Blumhorst became president of NPCA in February 2013. This role requires him to provide leadership and direction for the nonprofit organization supporting Returned Peace Corps Volunteers and the Peace Corps community. The NPCA encompasses a network of more than 50,000 individuals and more than 140 member groups.

Blumhorst grew up with a family farming background in Slater, Mo. He attended MU with the aspiration of a career in agricultural business. His international agriculture classes changed his aspirations. After receiving his B.S. in agriculture, he went on to obtain a Master of Public Administration, with an emphasis on International Development Management. During his time at MU, Blumhorst was involved in Block and Bridle, American Society of Public Administration, and played on the rugby team.

“I don’t remember every single detail about my time in CAFNR,” Blumhorst said. “But will never forget how much I appreciated the personal approach. Everyone worked towards a common goal and the professors helped me align my goals with my career. They really do care.” 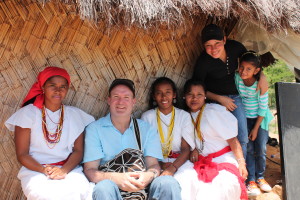 Blumhorst with members of the Arahuaco Indian group in the Sierra Nevada mountains of northern Colombia.

The summer after graduating from MU with his MPA, Blumhorst interned with USAID in Washington, D.C., as an institutional strengthening intern. In February of 1988, Blumhorst joined the Peace Corps in Guatemala as an Agricultural Extension Volunteer. During his time there, he developed and implemented experiential training and technical assistance for more than 18 rural Mayan Indian communities.“There are many challenges in the Peace Corps,” Blumhorst said. “I adapted quickly and the experiences I had helped me form a perspective on the world and international development.”

In September 1991, Blumhorst became Project Director for AMG International in Guatemala, a faith-based development organization working in over 30 countries of the world . In 1994, Blumhorst went on to work with ACDI/VOCA for 18 years in a variety of leadership and technical roles. ACDI/VOCA is a private, nonprofit organization that promotes broad-based economic growth, higher living standards and vibrant communities in low-income countries and emerging democracies. During that time, he held positions of Chief of Party and Country Representative in Bolivia and Colombia, as well as Managing Director of Community Development in Washington, D.C.

“It is so much easier to travel and adjust to changes now than it was when I first started traveling for my work,” Blumhorst said. “I am very comfortable with it now.”

“My goals for the future are to continue to have an impact internationally,” Blumhorst said. “I want to help the youth find their way to the Peace Corps. Academic experience is very important to work in international agriculture, but it was the Peace Corps that taught me how to deal with real life experiences.”

There are currently 34 MU grads serving in the Peace Corps. Nearly 1,000 MU grads total have served.

To check out CAFNR faculty in the Corps, visit the CAFNR Corps page at http://cafnrnews.com/cafnr-corps/. For more information on the Peace Corps, visit http://www.peacecorps.gov/.