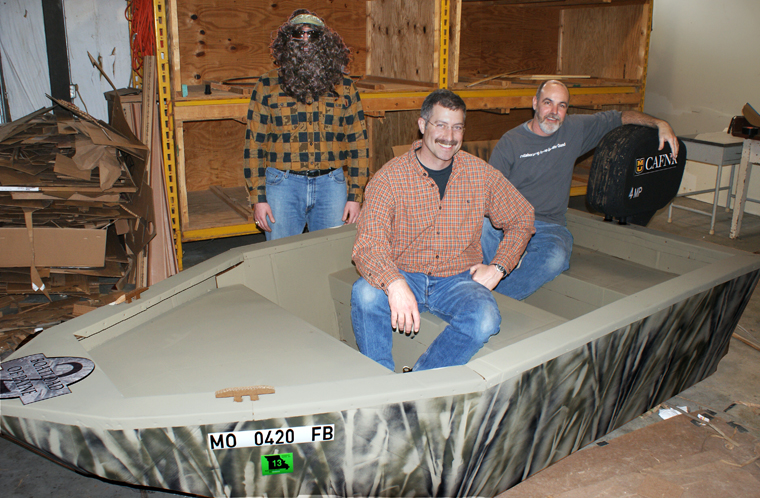 Dusty Walter and Drew Backues are the designers and builders of CAFNR’s entry into the Float Your Boat for the Food Bank race.

If the long beards and stern expressions don’t intimidate the other competitors, then the duck decoys and duck calls will confuse them.  The CAFNR team for the second annual Float Your Boat for the Food Bank race intends to win this year.

The April 20 Float Your Boat for the Food Bank cardboard boat race will take place at the Bass Pro Shops lake in northeast Columbia.  It is a fundraiser to help The Food Bank for Central and Northeast Missouri feed hungry Missourians. Last year’s inaugural race featured 20 boats and raised $2,460 and approximately 1,800 pounds of healthy food. So far in 2013, 52 boats have registered and more than $6,800 in donations have been collected. Eighteen Columbia businesses are assisting with sponsorships.

“The Duck Dynasty concept was developed as the boat took shape,” Walter said.  “Since the boat was Drew’s mastermind effort, I’ll give him credit for the Duck Dynasty theme.  All who’ve seen the boat agree that the concept is a good one.  The boat is the right size and shape to give the idea of fishing, hunting or other outdoor activities.  And, since CAFNR is, at least in part, Natural Resources – including wildlife and waterfowl – then it’s a natural fit.  If you don’t buy all that, then just accept that it will be a great deal of fun playing the part of Duck Dynasty characters.” 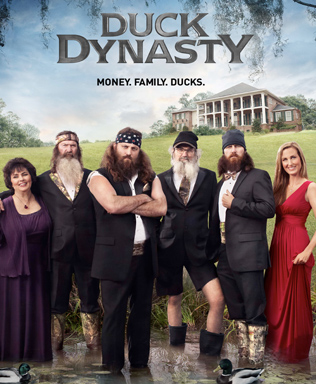 Each of the four CAFNR sailors will play a character from TV’s Duck Dynasty series.

“The boat is well constructed,” Backues said.  “With four people paddling it should race well.  It is designed with a very slight v-bottom (drop from the center V to the side of the boat is only an inch).  It also has a front-end that should cut the water very nicely.  We plan on winning.”

Last year’s CAFNR boat, a v-hulled hybrid kayak and Hawaiian outrigger craft, capsized on takeoff, giving Vice Chancellor Tom Payne and Associate Dean Marc Linit a stern view of the boat they raced against – the BoMoCo boat built by volunteers of the City of Columbia. Payne originated the idea of the race as a fun way to build awareness of the Food Bank’s mission to feed hungry in Missouri.  Data shows that one out of six Missourians are food insecure.

“This race will be fun, but most importantly it’s for a great cause,” Walter said. “And from all of us blessed during these years of national economic downturn, it is a good and right time to generously give to those who need a boost to see it through to better times.  We’re pleased to be a part of giving back to folks in Missouri.”

Construction of the boats is limited to cardboard, duct tape and glue. Boats last year were shaped like picnic baskets, stealth bombers and happy dogs complete with wagging tails and flapping tongues. More than half of these boats capsized or split apart before the finish line.

Duck Dynasty is a reality television series on A&E. It shows the lives of the Robertson family, who became wealthy from their family-operated business, Duck Commander, operated in West Monroe, La., which makes products for duck hunters, primarily the duck call named Duck Commander. The Robertson men, brothers Phil and Si, and Phil’s sons Jase, Willie and Jep, are known for their long, flowing beards.

The business began in a dilapidated family shed, where Phil Robertson spent 25 years making duck calls from Louisiana cedar trees.  His son Willie is now the CEO of the company.