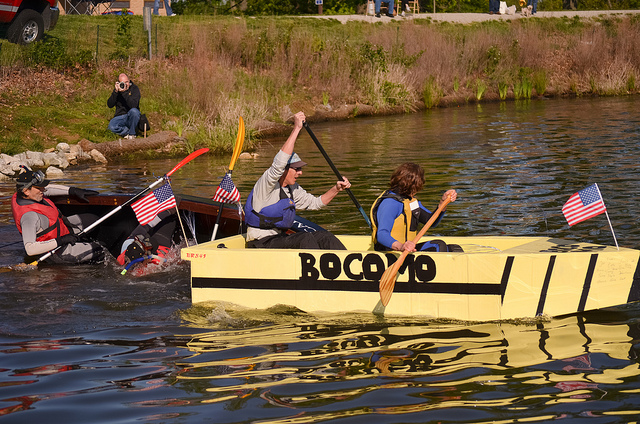 A boat sponsored by Boone County pulls ahead of the vessel commanded by Tom Payne, vice chancellor and CAFNR dean.

More than 50 cardboard boats constructed by student groups, community organizations, businesses, individuals, families and media companies have registered to compete in the April 20 Float Your Boat for the Food Bank cardboard boat race.

The race, which will take place at the Bass Pro Shops lake in northeast Columbia, is a fundraiser to help The Food Bank for Central and Northeast Missouri feed hungry Missourians. Last year’s inaugural race featured 20 boats and raised $2,460 and approximately 1,800 pounds of healthy food.  So far in 2013, more than $6,600 in donations have been collected. Eighteen Columbia businesses are assisting with sponsorships.

Construction of the boats is limited to cardboard, duct tape and glue.  Boats last year were shaped like picnic baskets, stealth bombers and happy dogs complete with wagging tails and flapping tongues.  More than half of these boats capsized or split apart before the finish line. 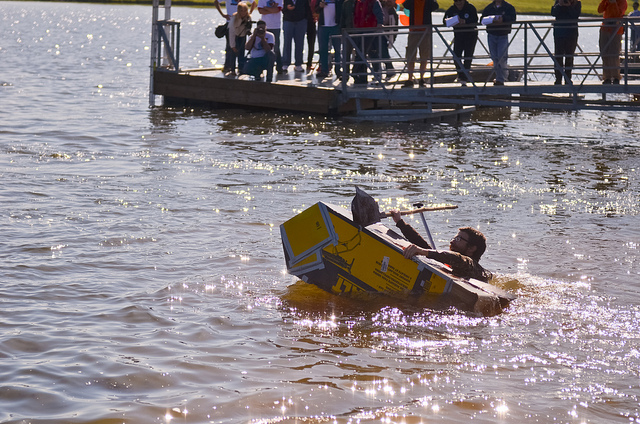 Captains cannot test their creations before setting sail in the race. Some boats easily traverse the course, others don’t.

Racing for a Good Cause

“Every dollar raised by the boat teams equals 11 meals or 15 pounds of food on tables in the 32 counties served by The Food Bank,” said Chris Sisk, special events coordinator at The Food Bank.  “Through our affiliation with the Feeding America network, the money raised through Float Your Boat will provide lots of families with food, and in turn, provide hope.”

The race is part of a relationship between the College of Agriculture, Food and Natural Resources (CAFNR) and The Food Bank. The project is part of CAFNR’s Collaborating for a Healthy Future, a project that utilizes the College’s expertise, partnerships and knowledge in such areas as agriculture, economics and nutrition to boost healthy food choices.

Promoting healthy food options is particularly critical as food pantry clients’ risk of obesity is twice that of the general population, said Tom Payne, vice chancellor and CAFNR dean. Payne, who originated the idea for the race, said in the last 20 years, Missouri’s obesity rate has swelled from just over 10 percent to greater than 30 percent among adults, placing Missouri among the 12 most obese states in the nation. 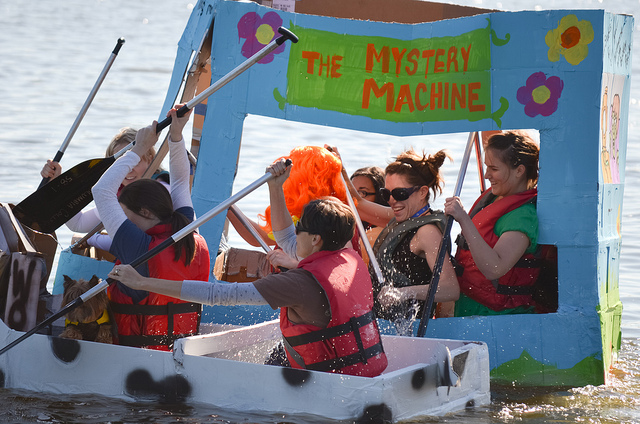 The majority of the people receiving food are working families, the elderly and children. “Seventy percent of Food Bank clients are working women with at least one child,” Payne said.

The Food Bank is not a governmental agency and more than 92 percent of its funding comes from donations, fundraising events and grants.

The Bass Pro Shops lake will allow for a longer course than last year, said Kristen Smarr, CAFNR director of communications. “The feedback we got said people wanted a longer and more competitive race, and more sinkings, that everybody – including the skippers – seem to want,” she said.  There also will be new pre-race activities and a fair area for the kids.

There also will be prizes for the Best in Show, Can’t Believe It’s Cardboard, Titanic Award for the Best Sinking, Best Use of a Theme, People’s Choice, Spirit Award, Ugliest Boat and the Modern Marvel.

Boat judging will begin at 11 a.m. April 20. The People’s Choice award will be decided by which boat collects the most donations to The Food Bank. Attendees can vote on their favorite cardboard creation until noon, when races begin.