The Hospitality Management program at the College of Agriculture, Food and Natural Resources will be hosting its second Benefit Gala Saturday, April 20. The gala will feature the talents of the program’s alumni and current students.

This event will include a five-course meal featuring guest alumni chefs and a silent auction. All proceeds go to Hospitality Management for the academic betterment of students in the program.

The gala’s guest chefs include Mamata Reddy, Matt Molloy and Michael DeStefano. They are all MU alums. 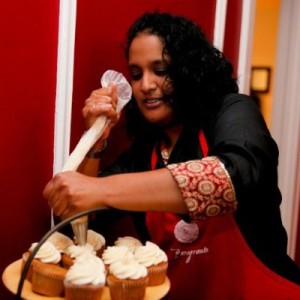 Reddy, a graduate of MU’s School of Journalism, came into culinary the long way. After working 12 years as an editor in academic publishing, baking had become an after-work release from the cubicle. She switched careers in 2005, after graduating from the French Pastry School in Chicago. She has worked in baking and catering throughout Chicago, including a year as the executive pastry chef at the United Center. In 2010, she joined the teaching staff at Gary Comer Youth Center in Chicago, educating youth on a better way of eating and living. While developing and executing the Youth Center’s farm-to-table baking and pastry program, Reddy continues juicing up Spoonfoolery, her made-to-order gourmet sweet treats company. She caters private parties, weddings and art gallery openings, and continues working on her blog, where she answers everyday kitchen quandaries, writes cookbook and restaurant reviews, and posts original recipes.

Molloy was born and raised in St. Louis. He attended MU to study business administration. To supplement college income, Molloy began to work in various restaurants and became hooked on cooking. Soon after, Molloy changed his major to hotel and restaurant management. After graduating, Molloy moved back to St. Louis and began working in increasingly sophisticated restaurants. During this time he also attended a local culinary school to obtain his culinary arts degree. Molloy became a sous chef at a prestigious country club. This opportunity gave him the chance to work with fine ingredients, as well as a chance to have an apprenticeship at one of the best restaurants in the country, Le Bernardin in New York City. Molloy now works at the Lumiere restaurant in West Newton, Mass.

DeStefano is a graduate of the MU Hospitality Management program and works at the Monarch in Chicago. DeStefano went to Johnson & Wales after high school for two years and graduated with a culinary degree in 2008. He worked at Equinox Restaurant in Washington, D.C., for one year before attending MU and getting a bachelor’s degree. He moved to Chicago and has worked at Kith & Kin, El Ideas, Graham Elliot, and currently The Monarch.

In addition to the guest chefs, two of the professors of hospitality management, Chef Leslie Jett and Chef Jeffrey Guinn, will be creating a course. 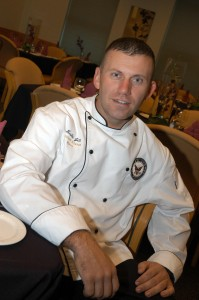 Jett is the executive chef and assistant teaching professor at MU. He graduated from CAFNR’s Hotel and Restaurant Management program in 1999. In addition to his degree in hotel and restaurant management, Jett has also earned a bachelor’s in general agriculture, a Master’s in career and technical education, a culinary degree from Johnson & Wales, and a Ph.D. in the agricultural education program from MU. Jett also serves in the United States Navy as a Supply Corp Officer.

Guinn is a resident instructor at MU. After earning a degree in industrial engineering, Guinn relocated to the East Coast. He has worked in several different environments in the hospitality industry, including chain and independent restaurants. In 2004, Guinn brought his engineering career to an end and returned to Missouri to pursue his degree in hotel and restaurant management through MU.

Gala tickets are $75 and are available at www.cafnralumni.com/hmgala2013. They must be purchased by the day of the event. Cocktail attire is requested. The event is a collaboration between the Conference and Events capstone and the Food and Beverage capstone courses.

MU’s Hospitality Management program features four unique tracks that allow students to specialize in one area. These areas include food and beverage, conference and event planning, sport venue management and lodging. After graduation, alumni of the department are prepared for management positions in all areas of the hospitality field.