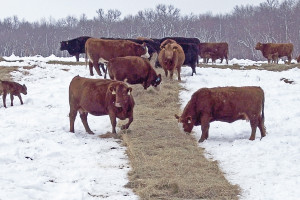 For most of us, the two massive snow storms that hit Mid-Missouri were a minor inconvenience. Once we were safely home, we could power up our computers, wrap up in a warm blanket and work comfortably. For the CAFNR faculty and staff who take care of livestock, a snow day meant something very different.

They trounced through snow drifts to unite cow-calf pairs, cleared snow all hours of the day, stayed overnight to take care of new calves, sometimes hauling them to a warming center in the cab of a tractor, and generally put in a champion effort to make sure the animals, and the people who care for them, were safe.

Forage Systems Research Center, Foremost Dairy Center, Thompson Research Center and South Farm were all in the path of snow storms that recently dumped more than a foot of snow on Mid-Missouri.

Justin Sexten, MU beef nutritionist, commended Kenneth Ladyman, a research specialist and MU Beef Research and Teaching Farm manager, who stayed at the Center for two nights to carry on experiments and take care of cattle, including newly born calves. “Calves are hitting the ground now and we have to be there whether it’s snowing sideways or not,” Sexten said.

In addition to caring for animals, staff at South Farm including Danny Crane, Brent Mahoney and Steve Calvin, worked through the night to keep KOMU open and clear roads at South Farm. 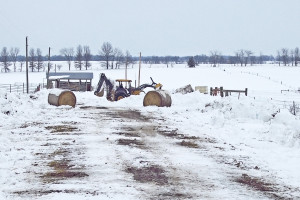 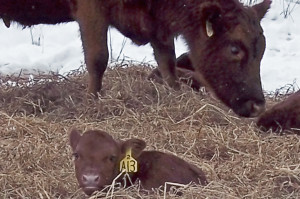 A calf curls up in the hay to stay warm.

At the Forage Systems Research Center (FSRC) near Linneus, dozens of calves were born the week of the storm. Staff there scrambled to locate calves that were separated from their moms during the blowing snow and even had a hand in restoring power to the area by pulling power company trucks out of drifts along the roads. David Davis, superintendent at FSRC, said Aaron Palmer, a farm worker at the Center, worked there for nearly three days straight, stopping to catch a few hours of sleep when he could.  “All of my staff put in extra long days to keep the research herd safe; I can always rely on them to  go the extra mile when the weather goes south,” Davis said. 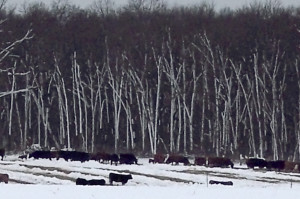 Cattle gather near the forest to keep out of the wind at FSRC.

John Schreffler, farm manager at Thompson Research Center near Spickard, unrolled hay at 2 a.m. so his cattle would have a dry place to lie in middle of the storm. They have 180 head of new calves at the Center.

“I’m very proud of the care given by our faculty and staff and all the livestock farmers to make sure that their herds get fed, water and shelter,” said John Poehlmann, assistant director of the Missouri Agricultural Experiment station.