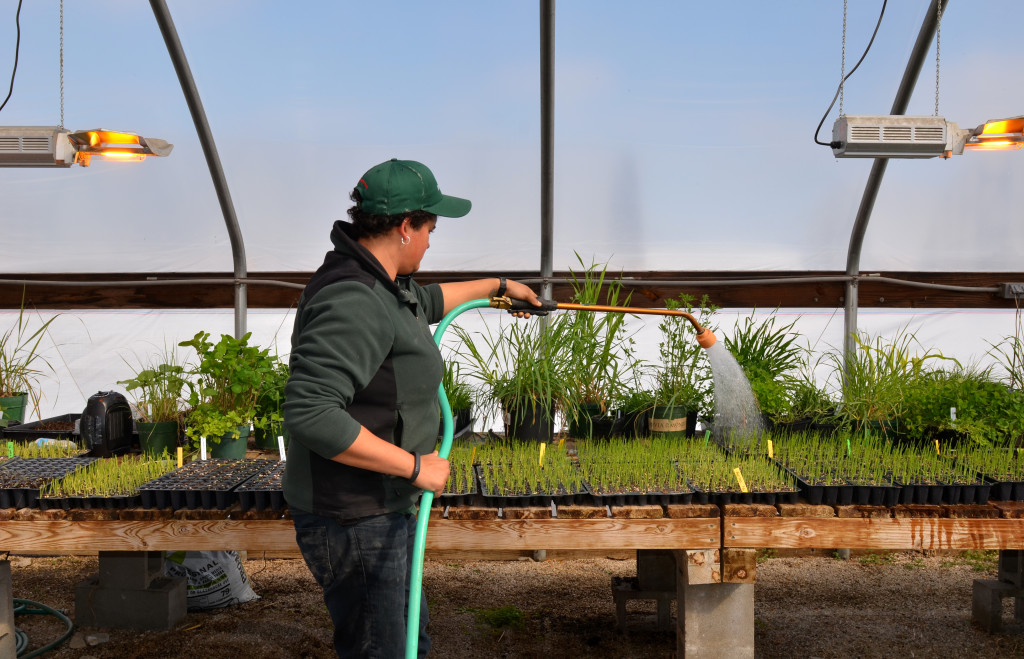 An agricultural research center isn’t the most likely place for an art history and psychology major to end up, but for Leslie Touzeau, it’s a perfect fit.

Touzeau has spent the last few years co-managing The Salad Garden, a small farm near Ashland, Mo., where she and her partners, Liberty Hunter and Dan Kuebler, grow a vast variety of herbs, flowers, fruits and vegetables that they sell at the Columbia Farmers Market and through CSA (Community Supported Agriculture) shares from their farm. 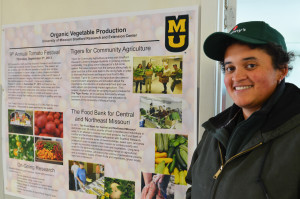 Like many organic farmers, one of Touzeau’s greatest challenges is weed control. She’ll spend the next three years examining methods to improve weed control, boost soil quality and increase yields in an organic vegetable production system at Bradford Research Center near Columbia.

The project was funded by a three-year grant from the Ceres Trust, and complements several research projects underway at Bradford examining the benefits of cover cropping systems.

Tim Reinbott, superintendent at the Center, and Kerry Clark, senior research specialist at Bradford, recognized a dearth of information in the Midwest for using no-till and cover cropping systems in vegetable production and aim to fill that void with this project. 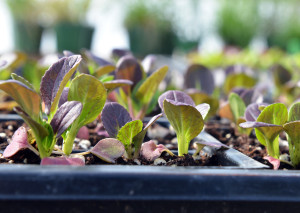 On a plot a little bigger than an acre, Touzeau will run experiments with myriad  approaches and vegetables including carrots, spinach, radishes, turnips, beets, sweet corn, Brussels sprouts and many more. She’ll sow seeds this spring and begin tracking and charting the results. The project also includes partnerships with two area organic farmers incorporating some of the experimental practices on their farms.

In addition to managing the research project, Touzeau is supervising several students trying their hands at growing food with Tigers for Community Agriculture, a group working to increase awareness and involvement in the benefits of community agriculture.

Students come from a variety of majors, including sustainable agriculture, geography, journalism, agroforestry and agricultural economics.  “It’s exciting for me to see these folks connecting to what it means and what it takes to grow food,” Touzeau said. 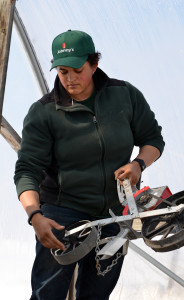 Touzeau explains how to use a seeding device.

This season, most of the food grown will be donated to the Tiger Pantry, a food bank and resource center that opened in 2012 and serves MU students, staff and faculty.

Paul Haluszczak, the director of Tiger Pantry, goes to Bradford for Tigers for Community Agriculture workdays. “The fact that a lot of this is being grown for the Tiger Pantry, we needed to get volunteers out here helping our cause,” said Haluszczak, a junior majoring in economics. “It’s a fun learning experience and we’re going to be the first university pantry to be able to provide fresh produce.”

Kat Seal, a junior majoring in sustainable agriculture, has volunteered with Tigers for Community Agriculture for the last three years. 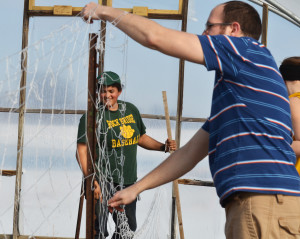 “Working with Leslie is completely amazing and a game changer,” Seal said. “We’ve struggled in the past with organization. I’m not a farmer. Before I got into this I’d never planted a seed before; I’ve learned a lot this year with Leslie. She can delegate and teach, and our co-leaders can be the liaisons between Leslie and students who want to get involved and drive the campus energy for the project. It’s a great partnership.”

Though she’s only been on the job for a few months, Touzeau is already making an impact and said she’s excited for the opportunity to connect research to practice.

“It’s great to be here and also have my own farm,” Touzeau said. “At Bradford, we’re not depending on income for those crops, so we have the freedom to experiment and Tim is innovative and willing to try new things, including vermicomposting, growing raspberries in high tunnels and raising bees.”

Returning to Her Roots

For Touzeau, pursuing a career in farming was a return to her childhood roots. Some of her first memories are from her parents’ homestead near Pierpont, Mo., where they had a big garden, tended plum and cherry trees, raised ducks and brewed beer. Most of that was given up when her family moved to Columbia when she was 5, but a connection to food remained, due in large part to her mom’s gourmet cooking. 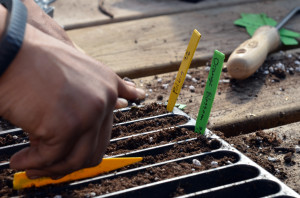 After graduating from Washington University, Touzeau considered culinary school, but when she learned of the cost, she decided to try growing food instead. She interned at Cultivate Kansas City, where she met her partner, Liberty Hunter. They moved to Illinois where they were full-time apprentices at Three Rivers Community Farm. Hunter and Touzeau were ready to farm full time, but lacked two critical resources — land and capital.

In 2010 they met Dan Kuebler, an organic farmer looking to take a step back from the daily toils of farming, but still desiring his land near Ashland to produce organic food for area communities. The three formed an equal alliance in 2011 that continues today as The Salad Garden.

“It’s a gratifying thing to work outside and sweat and be exhausted and then see the results of my labor,” Touzeau said. “I didn’t want to do anything else and there’s always a job in farming because everybody needs to eat and not a lot of folks want to do the work.”