“Changes in the economic development needs of Missouri, population demographics, societal changes and funding constraints call for new models for allocating funds and staffing,” said Michael Ouart, vice provost and director. “MU Extension’s previous staffing plan of 2007 was based on economic and social factors that are now outdated.”

On January 1, 2013, MU Extension moved to a total resource model for regional programs. Rather than budgeting for a specific number of positions, extension regions are allocated funds to carry out the highest-priority programs for the area. Priorities are driven by local need and demand as well as campus-based analysis of the greatest impact items coming from research. The total resource model is similar to how colleges are funded for extension work on the MU campus and includes general operating allocation from state and federal governments, contracts, grants, endowments and fees generated from programs.

“The focus will be on program impact, not the position,” said Ouart. “Decisions about where to invest in positions will be based on citizens’ greatest opportunities and needs and MU Extension’s available resources to fill those needs.” 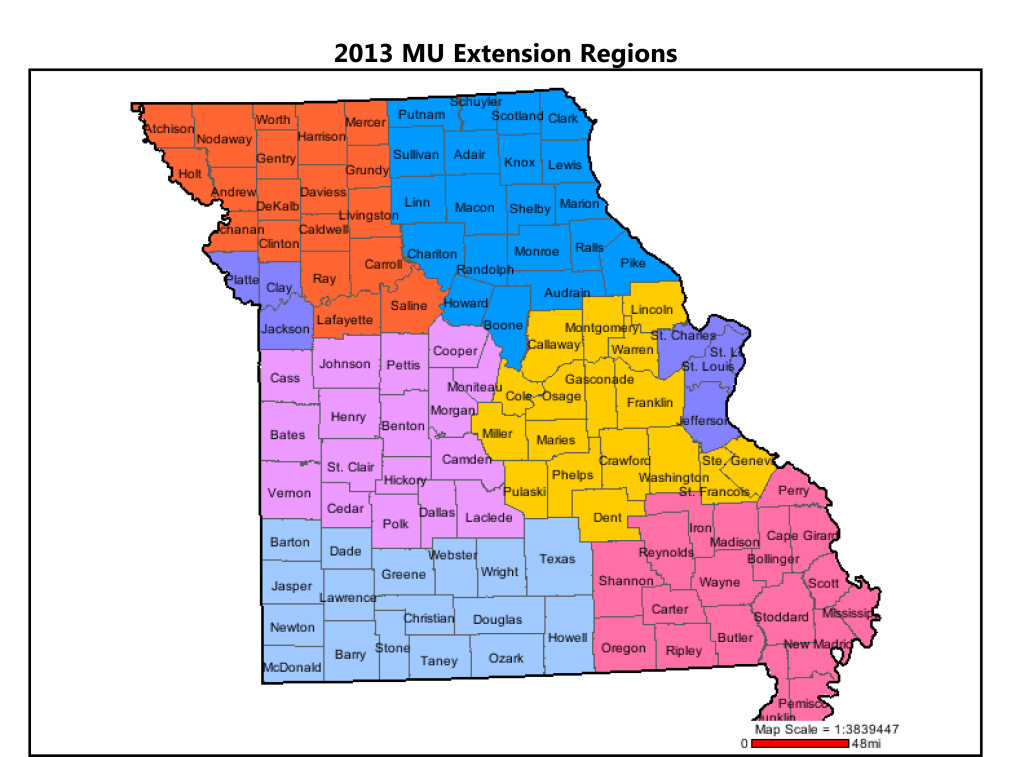 Regional directors, in collaboration with MU Extension’s program directors and with regional and county extension councils, will determine the mix and location of priority programmatic positions.

The realignment includes six rural regions and one urban region, which consists of the six counties surrounding St. Louis and Kansas City and the City of St. Louis.

In the Old North neighborhood in St. Louis, MU Extension partnered with CAFNR, the University of Missouri-St. Louis and a neighborhood restoration organization to develop a farmers market, food cooperative and a community garden and nutrition courses to improve access to affordable and nutritious food. That neighborhood has bucked population trends of the surrounding areas and is gaining population, due in part to the success of the revitalization effort.

Funding and budgeting under the new model will be driven not only by need but by measuring impacts, such as family and business income, community well-being, and skill development, Leuci said.

Part of staying nimble in delivering services means evaluating how to best employ rapidly changing technology. “How we deliver programs and take best advantage of our resources while maintaining that key asset of doing things face-to-face is critical,” Leuci said.

MU Extension will continue its nearly 100-year history of providing locally responsive programs that create healthy families and communities, support agricultural and business development and empower citizens to drive the overall economic well-being of the state.

Chism joined MU Extension in 2004 as an agronomy specialist for Polk and Barton counties. For the past three years, he also served as interim director for the Southwest Region.

Bush-Rowe has served MU Extension as a regional community development specialist for 20 years. As such, she worked with citizens to coordinate effective responses to local issues that impact lives.

Stewart has served MU Extension as a livestock specialist for more than 30 years. His program efforts focused on production and management, improved forage utilization, business planning for alternative enterprises, water quality and food safety. For the past three years, he also served as interim director of the Central Missouri Region.

Prewitt joined MU Extension in 1985 and has served as a regional agriculture specialist in the areas of farm management and agricultural business. Since 2010, he has served as interim director for the West Central Region.

Zluticky joined MU Extension in 2002 as county program director in Jackson County. Prior to joining MU Extension, she served as an extension educator at the University of Nebraska. She has more than 24 years of experience working on urban extension issues in three states.

Zluticky received a bachelor’s degree in home economics and a master’s degree in adult and continuing education from the University of Nebraska.