No detail is overlooked.

A five-star hotel in an exotic location? No, it’s a learning experience at one of the University of Missouri’s best-kept secrets. 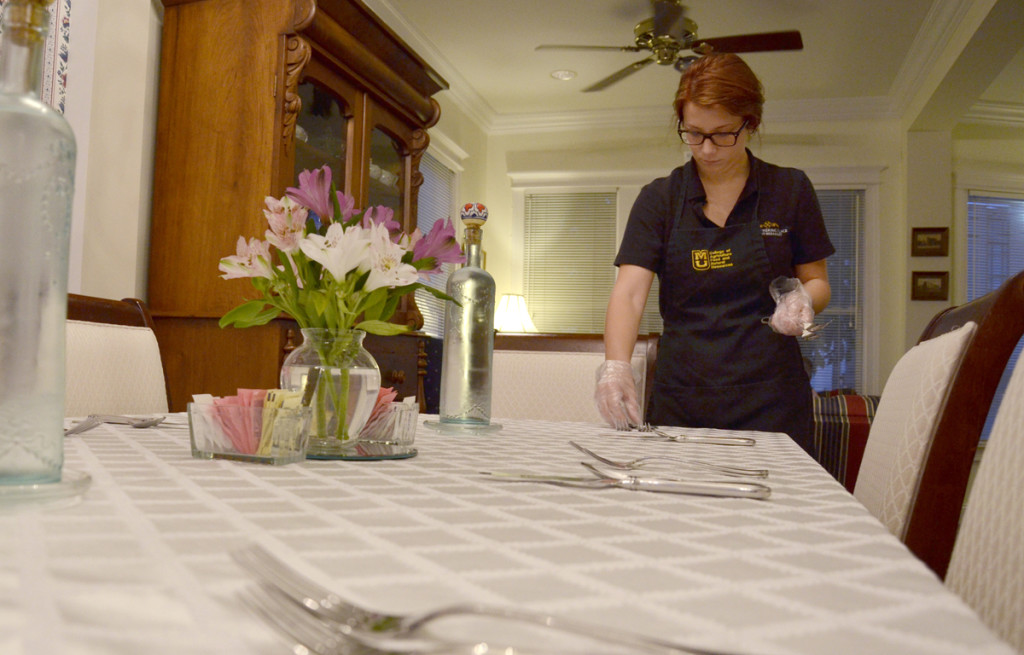 Julie Wade, a senior majoring in hospitality management at MU, sets the table for breakfast at The Gathering Place.

The Gathering Place Bed and Breakfast is a learning and research center for students majoring in hospitality management through MU’s College of Agriculture, Food and Natural Resources (CAFNR). Much of its clientele includes visitors to the university—alumni, parents of prospective and current students, researchers, speakers, professors and job applicants.

The Gathering Place is also where hospitality management students take what they have learned in the classroom and put it to use in the real world. 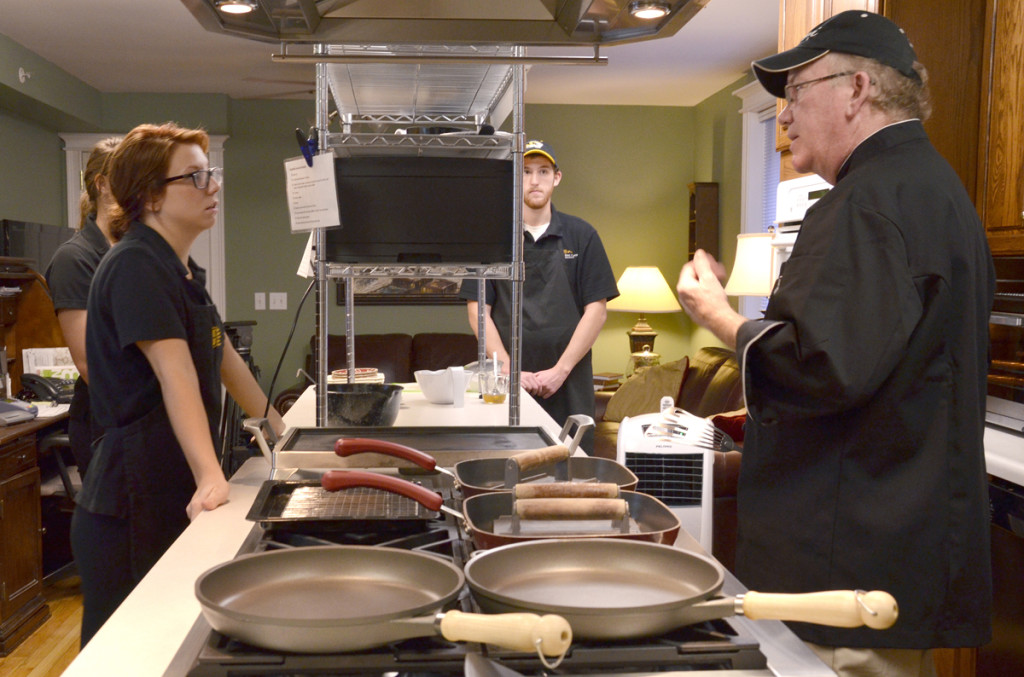 “Our students are involved in the total experience,” said innkeeper Deborah Strid, who supervises students.

From the homemade Norton wine ketchup to freshly ground and seasoned sausage, students learn the nuances of making a breakfast fit for a king, even a king with special dietary needs. Fresh flower arrangements from the on-campus florist, Tiger Garden, grace tables set with precisely folded linens.

The Gathering Place also uses innovative technologies that allow students to program guests’ access codes, interior and exterior lighting and individual room climate controls. Menus are entered into in a computer and guests’ preferences are tracked for future visits. Data is also used for sales analysis and determining the cost of operations. The data is made available to students doing research in hospitality operations.

Being on the cutting edge of hospitality management is key to the MU program, Strid said. Alumni of the program have visited the bed-and-breakfast after graduation and have told Strid that they have been able to implement or improve MU’s systems into hotels where they now work.

The Gathering Place served its 10,000th breakfast this summer and was awarded TripAdvisor.com’s Certificate of Excellence, an honor earned by consistently earning top ratings from TripAdvisor travelers.

Julie Wade of Osage Beach said she enjoys working at The Gathering Place as part of her coursework. In addition to learning culinary and hospitality skills, she’s learned to interact and network with guests. Within easy walking distance of Faurot Field’s games and tailgating, The Gathering Place is host to alumni and others with connections that students need in the real world. Some of the notables include MU graduate Robert Loggia, who played “Chopsticks” on a giant piano with Tom Hanks in the movie “Big,” longtime MU Tigers basketball coach Norm Stewart, and Walter Scheib, White House chef to Bill Clinton and George H.W. Bush. 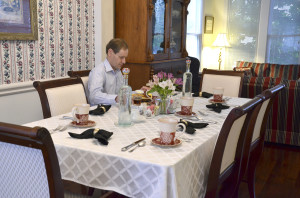 International visitors such as Patrick Mitton of the United Kingdom also enjoy the hospitality of the bed-and-breakfast. He likened the quality to a five-star European boutique hotel, offering the finest-quality food and service available. “It’s a lovely environment,” he said.

About The Gathering Place

The Gathering Place at 606 S. College Ave. was purchased by the College of Agriculture Foundation in 2008. The building is leased to CAFNR.

Cora (Gans) Davenport bought the land in 1905 to build her private residence, which she owned until 1918.

Throughout the 1920s it was home to several widows. In the 1930s the home was renovated and the south wing added.

In 1936, the house was home to Lambda Chi Alpha, the first of four fraternities to live there. The others were Alpha Gamma Rho, Tau Kappa Epsilon and Sigma Tau Gamma. In the 1960s, 70s and 80s, Edith Beary owned the house, which she divided into eight apartments.

Shirley and Ross Duff and their children purchased the property in 1994. The Duffs enjoyed having people over for parties, study groups or just fun, so they chose the name “The Gathering Place” for the house.

A complete renovation and restoration was undertaken in 1995. Careful architectural research revealed the original foursquare plan of the home. The house was gutted and taken down to the studs; 122,000 pounds of plaster and cast-iron plumbing was removed.

On Nov. 8, 1995, a fire during the final phase of renovation destroyed the third and most of the second-story framing. The water used to douse the fire ruined the original pine and oak flooring, which had been reconditioned.

In keeping with a faithful restoration, hardwood floors were replaced. Some of the replacement newel posts and stair spindles came from an 1851 home in Clinton, Mo., while others were reproductions commissioned from a manufacturer in Neenah, Wis.

In May 2008, the College of Agriculture Foundation purchased the bed-and-breakfast near the MU campus and now leases it to CAFNR, which operates it as part of the college’s hospitality management program.

Each guest room in The Gathering Place is named after an area of study—“Missouri History” on the main floor, “Literature,” “Textiles” and “Wildlife Conservation” on the second floor, and “Chemistry” on the third. The rooms are furnished with typical Missouri and American antiques and feature walnut, Missouri’s premium native wood. Original artwork, both antique and current, hangs throughout the house.

To learn more about The Gathering Place, go to www.GatheringPlaceBedandBreakfast.com.