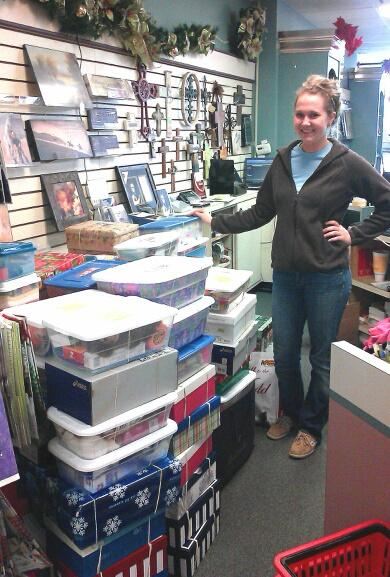 Children across the world may have a brighter Christmas thanks to members of the University of Missouri chapter of Sigma Alpha, a professional agriculture sorority.

Lauren Dietzschold and Hannah Wedemeyer, co-chairs of the chapter’s philanthropy committee, said the 70 members of the sorority made approximately 40 gift boxes to send to Operation Christmas Child, an international Christian charity that provides needy children with gift boxes that include such items as toys, ornaments and personal care items.

Wedemeyer learned about the project through her work at a Christian bookstore in Columbia and suggested it as one of the sorority’s many philanthropic projects for the school year. The group also helps with Ellis Fischel Hospital’s Cups of Kindness program for National Breast Cancer Awareness Month in October. Members filled teacups with goodies to be given to breast cancer patients.

Sigma Alpha is a professional agricultural sorority that promotes scholarship, leadership, service and fellowship among its members. The sorority was founded in 1978 at Ohio State University by five women who wanted an alternative to the social Greek sorority system. Since that time, Sigma Alpha has become a national organization consisting of more than 80 chapters. Since its founding, more than 9,900 members have been initiated into Sigma Alpha.

Members also are organizing a 5K run to raise funds for Heifer International, which provides gifts of livestock and training to families to improve their nutrition and generate income in sustainable ways.

Dietzschold said members like to spread the spirit of Christmas to others throughout the year.

For more information, go to www.SigmaAlpha.org.